Two decades after being robbed of the role, actor will get the chance to voice the Bat bad guy 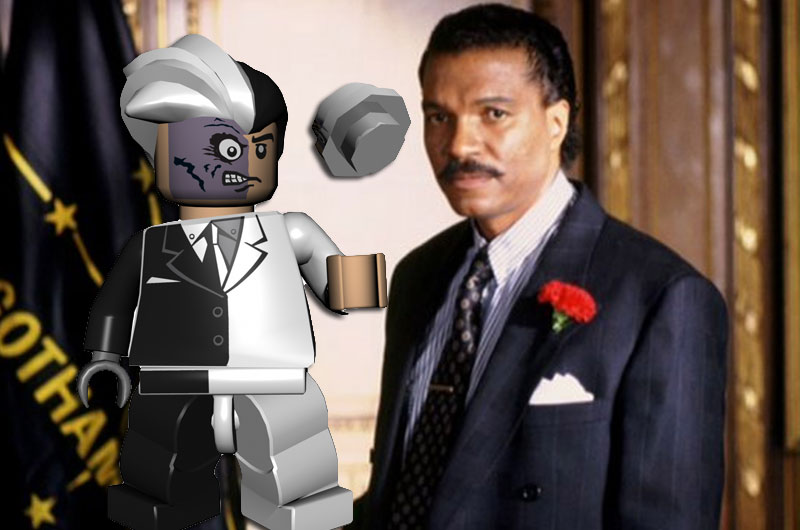 In the annals of comic book cinema, there have been three actors to play Harvey Dent in a Batman movie, but only two to portray Two-Face. Aaron Eckhart took on the role for The Dark Knight, while Tommy Lee Jones played a manic version of the character in 1995’s Batman Forever. But it was Billy Dee Williams who first embodied Dent in 1989’s original Batman.

When director Tim Burton was replaced by Joel Schumacher after two Bat films, Jones was given the chance to flip the two-headed coin instead of Williams. Over 20 years later, that wrong is about to be righted.

Asked by a fan on Twitter whether Williams would voice Two-Face in the upcoming The LEGO Batman Movie, director Chris McKay made every fan’s dream come true with a very succinct, “He does.”

Back in the ’90s, the plan was for Williams’ Dent to be used in the way Christopher Walken’s Max Shreck was in Batman Returns. Instead of frying at the end like Shreck did, Catwoman’s electric kiss would have burned half of Dent’s face, setting him up as the villain for Burton’s Batman 3. Obviously, this never actually transpired, but now Williams will finally get his oppurtunity to play a true Batman advisory.

Due out February 10th, The LEGO Batman Movie also stars Will Arnett as the title character, Michael Cera as his trusty sidekick Robin, Rosario Dawson as police commissioner Barbara Gordon, Ralph Fiennes as Alfred, and Zach Galifianakis as the Joker. The plot is said to involve Joker rallying a number of Gotham’s villains together, so expect more voice casting announcements soon.

Watch the latest trailer for the animated comedy below.