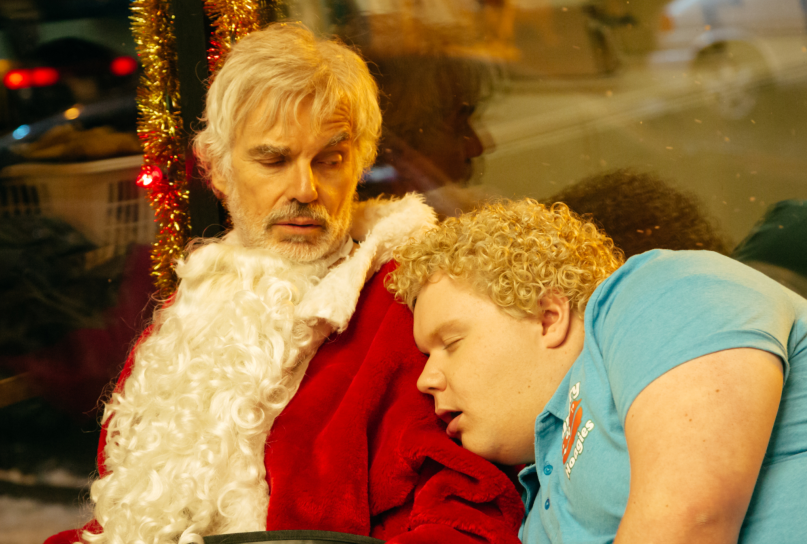 When the first teaser trailer surfaced for Bad Santa 2, the Internet drank it up. After years of toiling away in development hell, Miramax’s money-sniffing suspicions were finally confirmed that there was actually some sort of demand out there for another chapter in the sordid life of Willie T. Soke. Here’s the thing, though: Some stories actually end. Some characters don’t deserve another go-around. Some tales are best left untold … simply because they never needed to be told in the first place. It only takes a whopping three minutes of Bad Santa 2 to realize this.

In Miramax’s defense, though, there was plenty of reason to think a followup to Terry Zwigoff’s surprise 2003 blockbuster black comedy might actually work. After all, the film grossed nearly $80 million worldwide, won over critics across the board, and even nabbed a Golden Globe nomination for star Billy Bob Thornton. The problem with that thinking is the same problem that plagues nearly every sequel: Simply put, you can’t catch lightning in a bottle twice, it rarely happens, and if you’re going to try, you best have a really, really, really great idea on your hands.

Rest assured, that’s not the case for Bad Santa 2. The story picks up over a decade later in Arizona, where a Lauren Graham-less Soke is ready to kill himself and rid the world of his sleazy ways. That all comes to a halt when he’s tipped off about another heist, this time at a Christmas charity in the wintry confines of Chicago, Illinois. The twist? His mother, Sunny Soke (Kathy Bates), is calling the shots and Soke isn’t exactly ready for a family reunion. Like her deadbeat son, she curses, she drinks, and she smokes, lowering the bar for all of humanity and every audience who pays to see this crap.

Similar to Peter and Bobby Farrelly’s ill-fated attempt to resurrect the unassuming magic of Dumb and Dumber two years ago, this latest cash grab also fails to recall everything that made the original so refreshing and clever and daring. Gone is any sense of subversion, gone is any patience to humor, and especially gone is any semblance of heart. Instead, it’s an annoying, trite, and nauseating 92 minutes, chock full of lazy gags, predictable retreads, and a garish overuse of profanity, as if screenwriters Johnny Rosenthal and Shauna Cross were coached by Rob Zombie.

What’s depressing is watching the film’s A-list talent chewing on this embarrassing garbage. While none of the stars are above slumming it in a piss-poor comedy here and there, especially Bates, it wasn’t long ago that Thornton gave one of the best performances of his career on FX’s Fargo. To see him bumbling around this nightmare would have you believe he’s hit some sort of dead end, which is just not the case. Even worse is Christina Hendricks, who’s tragically reduced to a damaged sex doll here after playing the brazen Joan Holloway for six seasons of Mad Men.

Everything’s so achingly foul and with zero finesse, which makes for an awful, joyless experience. There’s nothing fun or funny about any of the characters, especially Soke, who has so outstayed his welcome that even Thornton appears to check out a quarter of the way through. Of course, it doesn’t help that the veteran actor is the only main talent left; if you recall, it was a four-part effort back in 2003, what with Zwigoff and the Coen brothers doing rewrites on Glenn Ficarra and John Requa’s original script. So, yeah, it’s not very surprising to discover that none of the acerbic wit remains.

That’s not to say Miramax didn’t try. Looking at the cast and crew, it’s no coincidence that they hired Mean Girls director Mark Waters in a misguided effort to gain back some of that missing (and much-needed) edge, somehow forgetting that it was Tina Fey’s writing and not Waters’ direction that made that film such a delicious black comedy. It’s also no coincidence that they shoehorned in Tony Cox’s deceitful Marcus Skidmore, Brett Kelly’s mentally handicapped Thurman Merman, and even noted Academy Award winner Octavia Spencer’s seedy prostitute Opal for cheap thrills. No, no coincidence at all.

But, none of it matters because it all comes back to necessity. What else really needed to be said about Willie T. Soke? Sure, he didn’t sober up and was still a total asshole at the end of the first film, but he did come to terms with his dirty deeds. That’s about the best arc and outcome you could have hoped to get out of the guy, which is partly why Bad Santa 2 feels so hollow. We’re watching nothing more than a lifeless marionette, puking and cursing at the hands of a greedy distributor, who cashed in their coins way too late in the game for one fraggle-stick car of a movie.