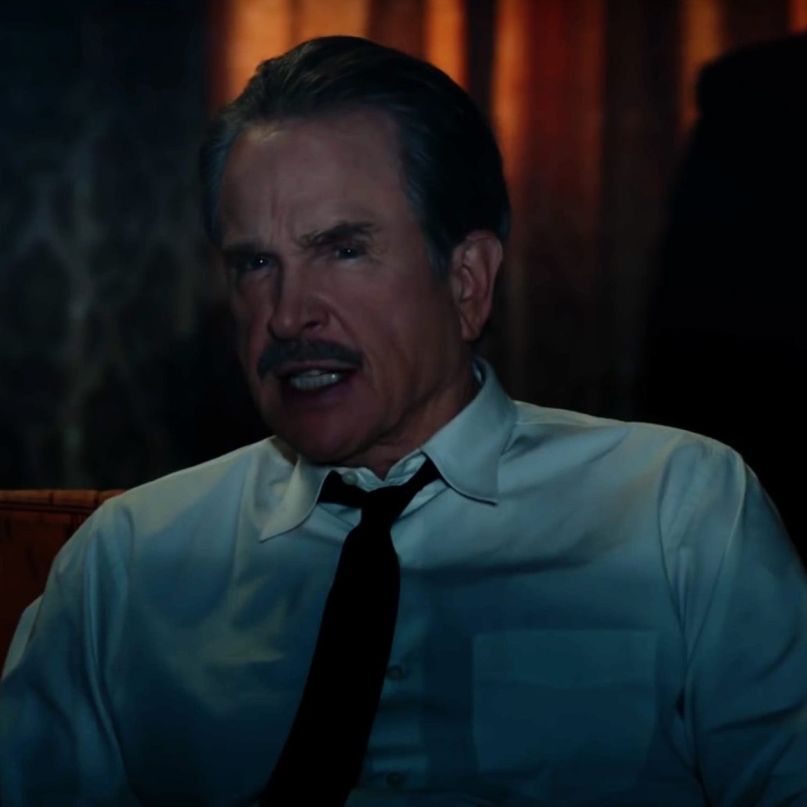 The film’s tagline ought to be “Make Billionaires Easy to Eventually Brush Off Again.”

We know the Howard Hughes of modern American legend. Playboy tycoon. Aviator. Surrounded by mason jars and tissue boxes in a Vegas penthouse late in life. Hughes, with all his power and billions of dollars, fascinated people. Not because he was charismatic or charming, mind you; because he was rich and unusual. And people just dig the power of the rich. Mental instability? Quirks. Affectless demeanor? Quirks. Cash by the barrel? Now there’s someone who’s clearly worked hard and is successful and probably tells things like it is! The point is this: don’t take an insulated person too seriously. Rules Don’t Apply is fascinated with that aspect of Hughes.

Take a scene where Hughes (played by the currently isolated Warren Beatty) is talking with one of his top errand boys, Frank (the dashing Alden Ehrenreich), on a dock. The shot tracks Howard and Frank down the pier as Howard seems to want to get to know Frank, and the young driver’s happy to oblige, but a real conversation ain’t happening. Hughes has a whole spiel prepared about the rise of STDs and the worth of investing in this new thing called birth control.

Frank’s a bit flummoxed; you see the confusion in his eyes, and polite patience in his smile, but he shows great admiration for Hughes. Something must be working for Hughes to amass such affluence and influence. And then, the boys finish the little chat over some burgers and Cokes. They eat while admiring Hughes’ Spruce Moose. At 4 in the morning. 1959.

Such is the comic life found within Warren Beatty’s Rules Don’t Apply. Beatty directs and stars in a quirky work about Hughes through the eyes of two corruptible lovebird employees. This isn’t a classical biopic so much as the tale of a supreme bullshitter. Call it old-fashioned. Call it offbeat. Even call it incomplete. But Rules Don’t Apply is a comedy of buffoonery, about people’s misguided notions of success, stature, and fame. And despite its shortcomings as a romance, and its hard-to-follow flow, this is also an often hysterical character comedy about a fading prince of the screen and sky.

The film opens with a Hughes quote: “Never check an interesting fact.” We won’t either. The facts matter less than the overall aura of Hughes. (For a detailed history, refer to Scorsese’s epic The Aviator.) We follow Hughes in his mid-‘50s, as played by a 79-year-old Beatty (so please, ignore “facts”). He interacts directly through both Frank, the young Methodist goody two-shoes, and Marla Mabrey (Lily Collins), the Baptist girl from Virginia trying to become one of Hughes’ actresses at RKO. Hughes mystifies them, and acts as an icon for the success they aim to achieve. But Hughes never makes it easy. And this being a film a film about an egomaniac, he’s naturally the star attraction.

The film is ostensibly a chase following Hughes, daring you to keep up with his dime-turn behavior. As a director, Beatty delivers scene after scene – mostly within hotel rooms – of people trying to reach Howard through doors and mics. It’s a long, silly game of telephone.

Take TWA, for example. In one scene, Hughes refuses to see Trans World Airlines execs over a matter of $400 million, and it’s incredibly funny because of Hughes making it all out like “Who’s On First.” In real life, this was a 1956 matter in which Hughes purchased $400 million Convair planes. In the film, it’s a riff on Hughes’ lackadaisical attitude toward money when he’s busy talking to a young girl about DNA, or some such thing. He just needs to see the TWA rep (Oliver Platt) to get an in-person confirmation of the transaction. It’s legally required.

Here’s this bold figure in modern history, making dangerous expenditures and gambling with so many livelihoods, who’s more interested in talking to a pretty dame. Or demanding banana nut ice cream through a speaker. Wait. Now he wants French vanilla. Or was it plain vanilla? Either way, some poor chef in a Vegas hotel is now stuck with 350 tons of banana nut (a great sight gag here, and charming product placement for 31 Flavors). Beatty sees the collective acceptance of unusual behavior, almost always excused by wealth and awe of wealth. That’s the film’s best joke and strongest theme.

Beatty directs vigorously, exploring with good ideas. He pads the film with washed, honey-coated photography from legendary lenser Caleb Deschanel (The Right Stuff, The Natural), dapper costumes from the great Albert Wolsky (Bugsy, All That Jazz), and a perfect overall aesthetic from. Art director Jeannine Oppewall (L.A. Confidential, Pleasantville) gives the film all the gaudy set dressing and quality production value one would expect from a story about Hughes, and it acts as an easy-on- the-eyes contrast to Hughes’ deterioration, and Frank and Marla’s coming to reality with their situation.

Beatty excels as Hughes, developing a persona of utter chaos that people can’t help but gravitate toward, obligingly. As a performer, Beatty knows how to make others as uncomfortable as Howard. His comic timing and use of awkward silence is aces. And his Hughes is a deep figure; a flashy provocation, with ostentatious behavior masking the real issues at hand. When you’re insulated and mad with power like Hughes, there’s no going back. Hughes as a whirlwind affecting people’s lives works incredibly well as a source of cringe comedy, but it’s not without consequence. Beatty found the perfect role for a reclusive filmmaker – a reclusive billionaire filmmaker, loaded with tics, easy to laugh with/at, worth reading into, and maybe the kind for which you could even feel empathy.

Now, the Frank and Marla romance, while endearing, never fully renders itself. Howard says. Howard does. The two kind of react as best as they can. Perhaps the film having four editors, or Beatty’s reputation for being stubborn (and Wikipedia’s initial runtime of 158 minutes against the finished 126) suggest grander ambitions. Maybe there was a broader, more concentrated effort about the big people and how they shape the little ones with dreams. Still, this is a twitchy biopic of a fashion, with ideas, style, great performances, and entertainment value.

The heavy parallels are nigh impossible to ignore. Hughes is remarkably similar to President-elect Donald J. Trump. Both men value flash and filigree. They repeat phrases ad-hominem. Threaten people with lawyers. Both sons born into wealth, using that money for high-risk ventures. And they possess an air of isolation and eccentricity that only intensifies with age and a ton of anecdotes. But Beatty embodies this caricature with a certain amount of panache, and affability. And if the film is any indicator, people can learn to tell smoke from fire. See the strangeness of someone like Hughes, and the trouble with a person like Trump. Know the difference between a huckster and a calloused snake oil salesman. Perhaps this linkage and Hughes’ wily antics can act as a reprieve. Rules Don’t Apply suggests that a man like this is worth writing off, even laughing at. But always watch your back around someone like him.

Hughes has seen his fair share of dramatizations on film (The Aviator, Melvin & Howard, The Hoax, even The Rocketeer), but Beatty delivers a fresh, idiosyncratic take, about the figure and the people in his orbit of oddity. Hughes’ story is one of the American classics: The lonely rich man. Kane. Gatsby. Trump. Beatty, however, looks at Hughes with bafflement, laughing the whole way.