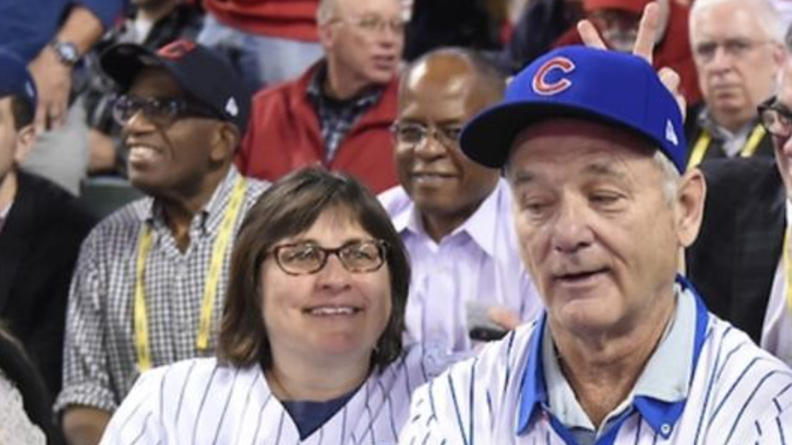 I live in the city of Chicago but am not a Cubs fans and would prefer the Cubs don’t win tonight so that Pick Me Up Cafe isn’t burnt to the ground in the ensuing celebratory riots. That said, it’s hard not to root for the North Siders after witnessing the antics of diehard celebrity fans such as Eddie Vedder and Bill Murray.

Not only have the pair been on hand for every single World Series game, they took turns leading the Wrigley faithful in a signing of “Take Me Out to the Ballgame” (Murray doing so in the style of Daffy Duck, mind you). Even after the Cubs lost game four on Saturday night, Vedder and Murray celebrated the mere idea of the Cubs being part of the Fall Classic by getting drunk and singing songs at a Wrigleyville house party.

After recovering from his weekend hangover, Murray traveled to Cleveland for Monday night for game six of the series. Being Bill Murray, he happened to go alone, even though he had two tickets in hand. And being Bill Murray, he opted to give his extra ticket to a random passerby in a Cubs jersey. That lucky fan, Karen Michel, got to sit next to Murray and his other celebrity friends, including Vedder, and together they watched the Cubs smash the Giants 9-3 to force a game seven.