"I think it’s the best thing that’s happened to us in a long time," the singer said in a new interview 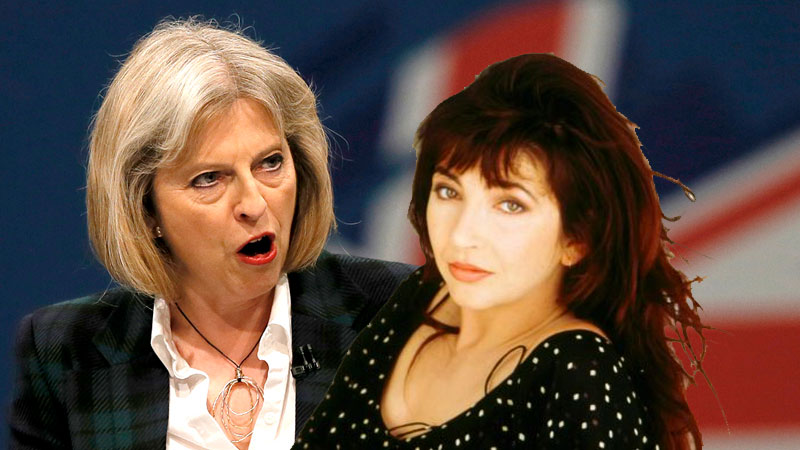 In case you thought we here in the United States were the only ones dealing with some political unease, let’s not forget our friends over in Britain. After the much-discussed Brexit and David Cameron’s subsequent resignation, Conservative Party Leader Theresa May was quickly appointed Prime Minister. May has taken hard lines against immigration and minor drug offenses, advocated the use of nuclear weapons, attempted to widen the government’s ability to invade Internet privacy with something called the Snooper’s Charter, expressed distain for the Human Rights Act, and abolished the Department of Energy and Climate Change. (Any of this sound familiar?)

Despite being defined as a liberal conservative (she does support gay marriage and was against Brexit, if only passively), it’s policies like the above that have caused some to look warily upon her leadership. Pop icon Kate Bush isn’t one of those people, however. In a recent interview with Canadian magazine Macleans, Bush was asked whether she thought Hilary Clinton’s loss to Donald Trump was a sign of “the fear of women’s power.”

“We have a female prime minister here in the UK. I actually really like her and think she’s wonderful,” Bush replied. “I think it’s the best thing that’s happened to us in a long time. She’s a very intelligent woman but I don’t see much to fear. I will say it is great to have a woman in charge of the country. She’s very sensible and I think that’s a good thing at this point in time.”

The question was referencing the song “Waking the Witch”, which features on Bush’s recently released live album, Before the Dawn. Almost ironically, the prior question was about how Stephen Hawking recently estimated Earth has about 1,000 years left. “Well, nobody really knows, do they?” said Bush, a noted environmentalist. “They told Stephen Hawking he only had a year left to live and how many years ago was that? You can’t know it all.”