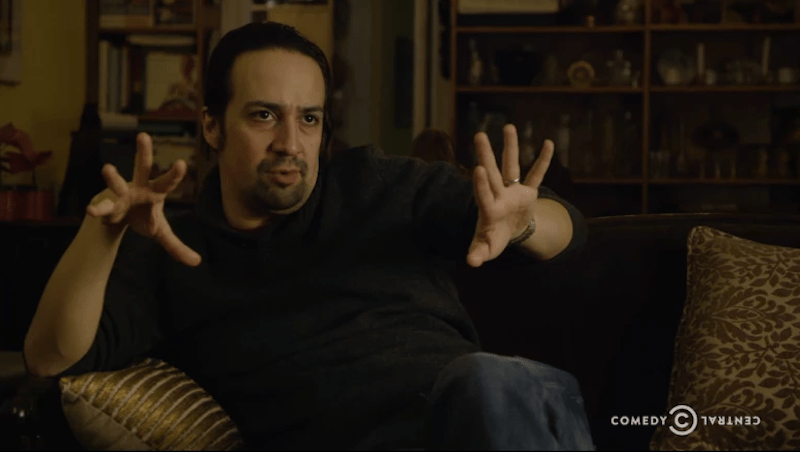 Even though Lin-Manuel Miranda left the production weeks ago, it’s become harder than ever to get tickets to Hamilton. (Thanks again, Trump!) Thankfully, there’s now a way to hear Miranda’s take on the Founding Father without forking over hundreds of dollars for seats; it’s just a little less musical and far more slurred.

The Broadway superstar was the featured storyteller on this week’s episode of Comedy Central’s Drunk History, during which he recounted the life of Alexander Hamilton. For the unfamiliar, the show is exactly what it says it is: A knowledgable guest gets completely wasted with host Derek Waters and then tries to tell a fascinating bit of historical non-fiction. That tale then gets acted out by a slew of recognizable actors in a high-production recreation with the guest’s drunken ramblings as all the dialogue and voiceovers.

Drunk History actually tackled the duel between Aaron Burr and Hamilton once before — on the debut episode back when it was just a web-series, no less — but no one could handle it with the level of completeness that Miranda did. Gradually getting more intoxicated on Tennessee whiskey, Miranda narrated the entire story from Hamilton and Burr’s orphaned youth to their political rivalry, with stops at flaming ships, the revolutionary war, and a sex scandal along the way.

Comedy Central brought together a hell of a cast to act out Miranda’s intoxicated retelling. Alia Shawkat (Arrested Development, Green Room) takes the role of Hamilton and Aubrey Plaza (Parks and Recreation, Mike and Dave Need Wedding Dates) plays the saucy-faced Burr. Another Arrested alum, Tony Hale, portrays James Monroe, Bokeem Woodbine wears George Washington’s wig, and David Grohl and David Wain even make cameos during the Constitutional Convention. There’s even a random and unplanned appearance by Questlove tossed in because this is Lin-Manuel Miranda we’re talking about.

It’s all as fascinating as it is downright hilarious, and multiple viewings will certainly tide you over till you win that Broadway lottery or more tickets open for the 2019 season. Check it out through your cable service provider at Comedy Central. You can also watch a few clips from the episode below.