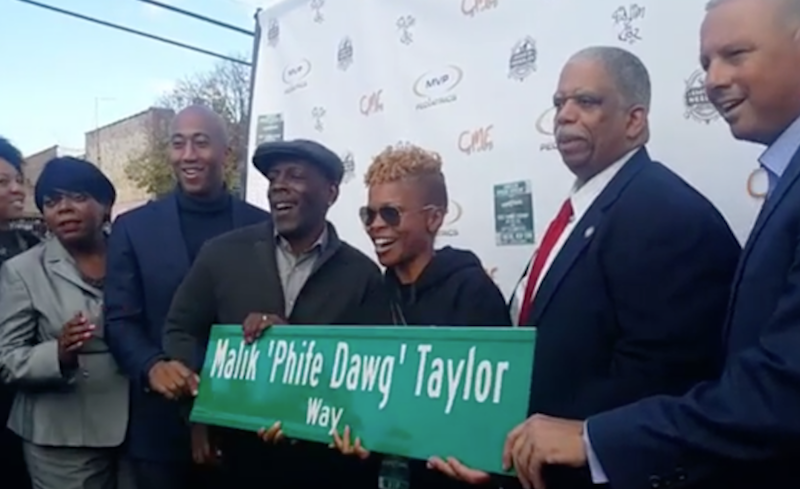 A street in Queens, New York has been renamed in honor of A Tribe Called Quest’s Phife Dawg. At a ceremony held on Saturday, Malik ‘Phife Dawg’ Way was officially unveiled at the intersection of 192nd Street and Linden Boulevard. Phife considered the nearby area his stomping grounds, while the intersection itself was specifically referenced in a number of ATCQ’s songs, including “Check The Rhime” and “Steve Biko (Stir It Up)”.

ATCQ’s Q-Tip, as well as Busta Rhymes and Phife’s friends and family, were among those attendance for the ceremony. In a short speech, Q-Tip said, “This is no coincidence. This is divine order. So I want everybody to remember this album we put out has nothing to do with us…fame and notoriety. It’s for reason and purpose. That same reason and purpose is instilled and embedded in every one of you. Don’t give up. Don’t give up. Don’t feel bad because you have to sometimes do what you have to do to survive and to do better for yourself and your family.”

Phife died this past March from complications from diabetes, just a few months before ATCQ returned with their first album in 18 years, We got it from Here… Thank You 4 Your service. The group is expected to embark on one final tour in support of the LP.

Below, check out videos and pictures from Saturday’s ceremony.

"Malik 'Phife Dawg' Taylor Way" • 1 pm ET, we take it back to where it all began–192 & Linden. @RevoltTV will broadcast live on FB. #phife pic.twitter.com/xM5xwGQ4wy