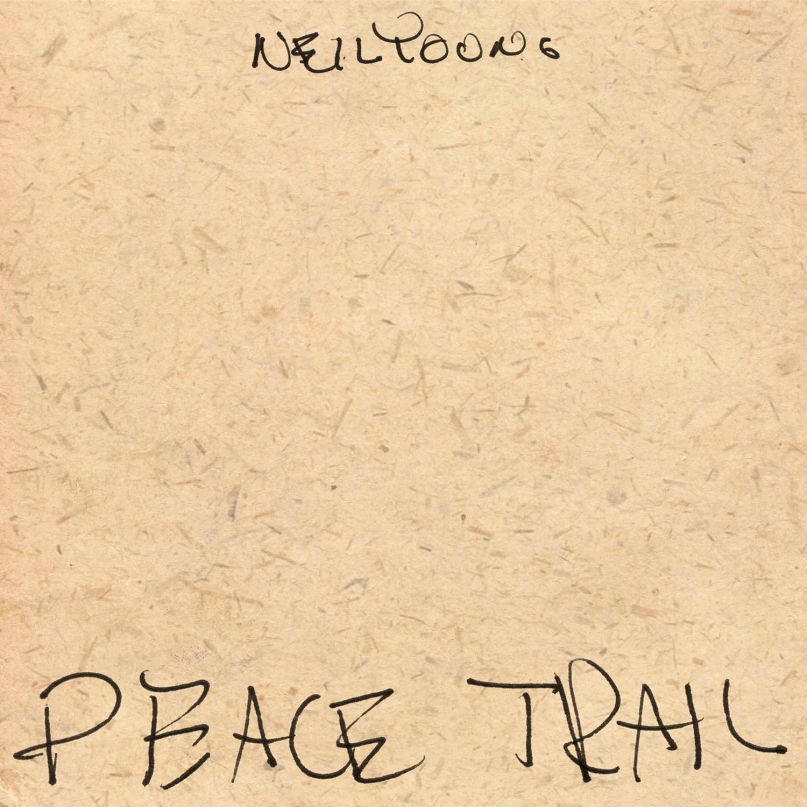 Neil Young’s songbook long ago cemented its place among the best in rock and roll history. But writing great songs has always seemed to be but one part of Young’s greater mission. His continued relevance into the sixth decade of his career is owed to something that transcends hooks and melodies. Young is now, and always has been, the closest thing rock music has had to a moral compass. He’s waged war with his own label, used his music as a political soapbox, and given support and council to other musicians in their pursuit of artistic freedom. Neil Young still matters in 2016 not simply because he still has the chops, but because he still cares enough to take a hard stand when he has to.

But fighting the good fight can take a lot out of a man, even one as compulsively driven by gut and conviction as Young. Peace Trail, the iconic singer’s 37th record, is still colored with its creator’s testy outspokenness, but there are also unavoidable moments of resignation. “Bring back the days when good was good,” he sings on “Indian Givers”, the record’s third track. “Lose these imposters in our neighborhoods.” It’s a stunningly naked appeal, especially coming from a man who has made a valiant career out of fighting tooth and nail against big government, big business, and other segments of the status quo. Such moments are peppered throughout Young’s latest set, suggesting that today’s turbulent times might be giving him all he can handle.

But as Young attests on the album’s aptly titled second track, “Can’t Stop Working”, his creative mojo comes alive when the world around him delivers the source material to work with. Peace Trail, recorded with bassist Paul Bushnell and drummer Jim Keltner, narrows its focus specifically to the ongoing Dakota Access Pipeline protests. The largely acoustic 10-track affair is blunt and to the point, even by Young’s opinionated standards, operating not only as a defense of the Standing Rock Sioux Tribe and the protesters championing its cause, but also as a hot-blooded critique of the corporate interests at the heart of the controversy.

“The world is full of changes,” Young sings on the fuzzy, contemplative title track. “Sometimes all these changes make me sad.” At 71, he sounds like a man who is losing his grip on the world he once knew. It’s a tough pill to swallow for one of rock music’s most liberal champions, but Young and co. still aren’t quite ready to take their medicine. Peace Trail soldiers onward, swinging a clenched fist at everything from corporate greed to the ways in which technology is driving people further away from one another (“My Pledge”, “My New Robot”). On the rustic folk ballad “John Oaks”, Young tells the fatal tale of the consequences that come with standing up for one’s roots. But not all of the record’s shots are taken at menacing authority figures. Young also tries to hold his own listeners accountable, as “Glass Accident” calls out America for its indifferent, pass-the-buck mentality. “Too many pieces for me to clean up, so I left a message at the door,” he sings.

There’s an immediacy to Young’s latest set, and Peace Trail, like many of Young’s records, feels cooked up in the moment rather than something meticulously labored over. The loose approach has its hits and misses. When it’s working, the record’s sparse instrumentation backs up the weight of Young’s words. Keltner’s drumming, much of it driven through toms, often gives Peace Trail the rootsy, tribal feel that suits its subject matter. Still other tracks sound a bit more dashed off. “Texas Rangers”, at a brisk 2:30, sounds unmistakably like filler tucked squarely away in the middle of the record. Young’s prolificness and penchant for producing in the moment often makes for mixed bag records, and Peace Trail is no exception. But if the execution flails in spots, the intention behind these 10 tracks is still plenty inspiring. In then end, it’s hard to feel too slighted when Young continues to come at his work from such an honest place. Rock’s most earnest curmudgeon might be getting older, but he’s not too old yet to still carry a well-deserved grudge. That itself is a great thing.