A stunning elixir of golden age romance and timeless melodies 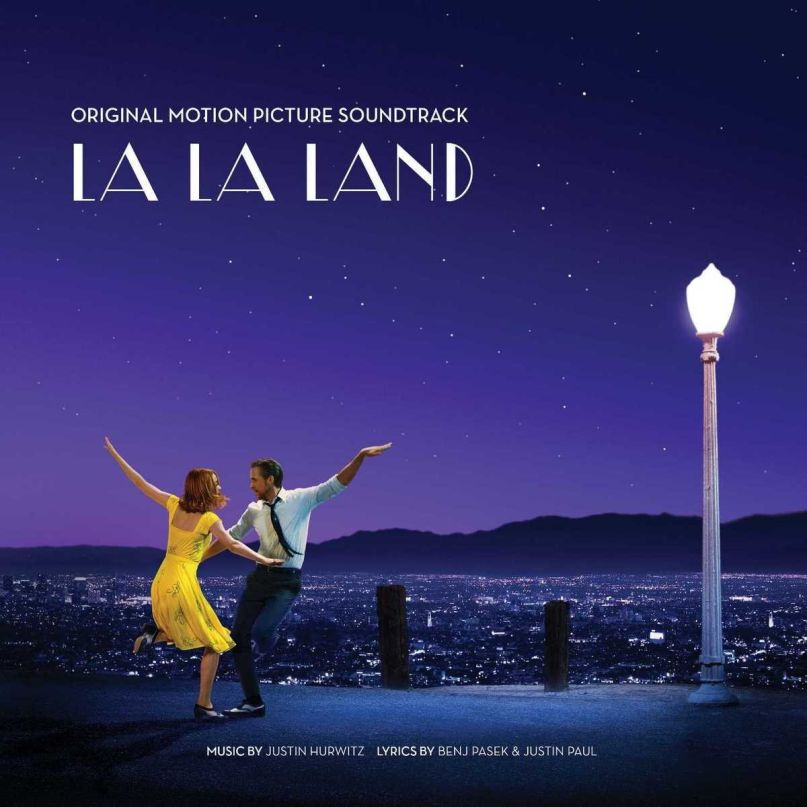 Falling in love has always worked better with a soundtrack. What would Joseph Gordon-Levitt’s prance through the streets in (500) Days of Summer have mattered without the bounce of Hall & Oates “You Make My Dreams”? Lord knows we only tolerate Ben Affleck awkwardly trotting animal crackers up Liv Tyler’s stomach in Armageddon because it’s paired with Aerosmith’s “Don’t Wanna Miss a Thing”. Ever since talkies found the value of song, the silver screen has had a penchant for pairing bursting hearts with the perfect tune.

The same formula might’ve worked just fine for La La Land, the sophomore film from writer-director Damien Chazelle (Whiplash). It would’ve been easy to back scenes of moonlit tap-dancing and dark theater hand-holding with the work of Adele and Ella Fitzgerald. Instead, Chazelle and composer Justin Hurwitz have created a soundtrack of original songs that stand toe to toe with the great movie musicals of the past.

La La Land stars Emma Stone and Ryan Gosling as Angelenos longing to realize their dreams. For Stone’s Mia, that means becoming an actress, while Gosling’s Sebastian is a jazzman who longs to open a club of his own. La La Land isn’t a musical in the traditional sense; rather than being sung-through, the film sports plenty of dialogue between numbers. But by saving the songs for key moments and linking them together through Hurwitz’s opulent score, the results are a stunning elixir of golden age romance and timeless melodies.

Things kick off with “Another Day of Sun”, a fairly traditional, upbeat number complete with jumping piano chords and characters trading off verses. The lyrics speak of Hollywood’s allure, as one woman sings: “Summer Sunday nights/ We’d sink into our seats right as they dimmed out all the lights/ A Technicolor world made out of music and machine/ It called me to be on that screen.”

In the film, a massive production accompanies the song, as traffic-jammed drivers on a Los Angeles freeway abandon their cars to dance and sing. Those who have seen the film will understand the long, sweeping musical interludes of building strings that soundtrack the more elaborate choreography. While warm and sweet on its surface, “Another Day of Sun” also fills the pivotal opening role of laying out the crux of the story. Yes, these are excited dreamers with a song in their hearts, but they’re also stuck on the freeway, going nowhere fast.

Chazelle and Hurwitz revel in being clever with La La Land’s music, but never to its detriment. In “A Lovely Night”, they channel the classic conceit of having two people who are clearly meant to be together singing about how wrong they are for each other. Sebastian sets the tone when he muses, “A silver shine that stretches to the sea/ We’ve stumbled on a view that’s tailor-made for two/ What a shame those two are you and me.” The chorus of the song (“What a waste of a lovely night”) is a perfect wink back to something Fred Astaire and Ginger Rogers might have crooned to one another.

It’s only to fair to note that while Gosling and Stone do admirable work as singers, neither has an especially strong voice. In particular, Gosling manages to mask his deficiencies by speak-singing on occasion, but there’s a certain charm that comes with casting “amateur” voices in a musical. In a way, it provides the listener with a more direct route to empathy, allowing you to imagine it might actually be you who is suddenly compelled to burst into song.

(Read: La La Land is a Bright Spot at the End of a Very Dark Year)

Stone, who did previously star as Sally Bowles for a time in the Broadway revival of Cabaret, uses the fragility of her voice to great effect, most noticeably in the show stopper “Audition (The Fools Who Dream)”. Starting with dialogue, the song comes as Mia auditions for the role of a lifetime. Stone’s voice is raspy but sincere at the a cappella onset, which gradually builds into a poignant ballad about the joy and sorrow of pursuing your dreams.

As might be expected from its title, “Mia & Sebastian’s Theme” acts as the core of La La Land. The slow, slightly melancholic piano notes return again and again throughout the film, at times representing the joy of love and in other places the gut-punch of its end. Eventually, it abstracts into something jazzy and quick, abrasive but precise. It ultimately plays its largest role in “Epilogue”, the soundtrack’s longest track, and one that serves as an overture in reverse.

It’s impossible to truly describe “Epilogue” without spoiling what may be one of the finest cinematic third acts in years, but listeners will note that the track goes from a segment of “Another Day of Sun” to a swing version of “Audition” into a lone trumpet solo that escalates into a euphoric bleat. The piece continues with a classic celebratory orchestral build, complete with the choir vocals one might expect at the happy conclusion of a vintage Disney film, until finally it seeps back into a somber, refracted piano playing a sparse refrain of “Mia & Sebastian’s Theme”. Even without the visual accompaniment, “Epilogue” is an extraordinary piece of score, one that finds the notes and rhythm necessary to seamlessly move through emotions.

Within the story of La La Land, “Mia & Sebastian’s Theme” is something Sebastian returns to on his piano. It also shares some tonal DNA with “City of Stars”, the other song granted the privilege of a reprise (two actually). At first, Sebastian sings it longingly, wondering, “Is this the start of something wonderful/ Or one more dream I cannot make true?” Later, Mia and Sebastian duet at her apartment, the lyrics altered to reflect a budding romance and the first moment the two seem, for lack of a more eloquent description, genuinely happy. At several moments in the duet, Stone laughs as she sings — a small touch that again adds worlds of sincerity to a genre that is often lambasted for being fake or grandiose.

The final reprisal of “City of Stars” comes over the end credits, this time with Stone humming and later using “bum bum bahs” and “da da dahs” in place of the words. Like all of La La Land, it is a perfect encapsulation of how people and songs evolve, from worry to love to a point where no words are needed. It is, of course, the music that remains: a constant companion and guiding light. Maybe life having a soundtrack is but a dream, but as La La Land’s remarkable music proves, it’s one well worth believing in.

Essential Tracks: “A Lovely Night”, “Audition (The Fools Who Dream)”, and “Epilogue”

Previous Story
The first trailer for The Fate of the Furious has been revealed — watch
Next Story
Reunion of the Year: Guns N’ Roses
Popular
More Stories
[fu-upload-form form_layout="media" title="Submit Your Photo"][input type="hidden" name="ugc" value="1"][/fu-upload-form]