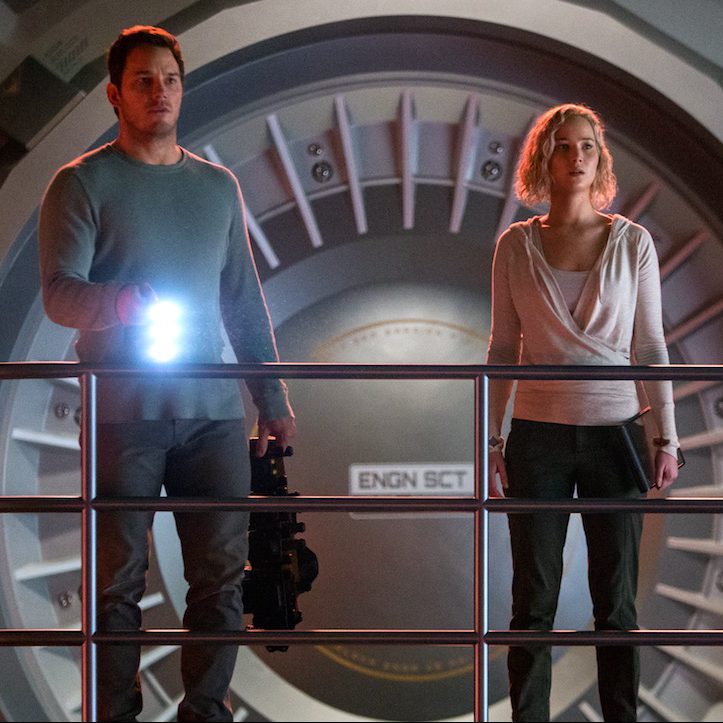 (Note: should you be the spoiler-averse type, move on. To talk about the details of Passengers is to deviate heavily from what’s been promoted so far. So now you know.)

Passengers starts off with the kind of premise that sounds great in a vacuum. Say, for instance, the vacuum of space. Aboard the Starship Avalon, over 5,200 deep-space travelers are suspended for a 120-year cryosleep en route to Homestead II, the latest and greatest in a series of corporation-colonized, Earthlike planets. But Passengers isn’t about Homestead II, and barely touches on what might happen there. Instead, the film’s first third exclusively follows Jim Preston (Chris Pratt) as he awakens just 30 years into the trip after his sleep pod malfunctions. After realizing what’s happened, the engineer sets about trying to get himself back to sleep, but the state-of-the-art ship isn’t built to be hacked by basic human ingenuity.

Passengers is a different film in those early minutes, and it’s the closest that the big-budget feature comes to resembling a competent science fiction film. Though it’s basically just a desert island story by way of Wall-E, from the ironically chipper AI and precocious Roombas to the emotional theatrics of isolation, Jim is established as both an irreverent Chris Pratt type and as an intelligent man trying to think his way out of the utterly unthinkable. He immediately seeks out schematics, but those offer no viable solutions. He tries to brute-force his way through doors, to no avail. And after a year on the ship, even its amenities (a DDR-style augmented reality game, a basketball hoop, various fancy restaurants) have lost their luster. Before long, Jim is fully bearded, despondent, and trying to hurl himself into the abyss of space, but he can’t even do that; the ship tethers and prevents him.

And then, Jim’s fortunes take a turn, as do those of the film around him. He happens upon the pod of Aurora Lane (Jennifer Lawrence), a writer of some reputation who’s asleep on the ship. Soon Jim starts watching Aurora’s video interviews while being vetted for a spot on the ship. Then he starts spending time with her. Soon, he’s in the ship’s one drinking establishment trying to rationalize a scenario in which awakening Aurora to stave off his loneliness would be ethical or sane in the slightest. The android bartender, Arthur (Michael Sheen), has no answers. And yet, faced with the possibility of living and dying in utter solitude, Jim makes an unthinkable choice that sends both of their lives on a very different course.

The ensuing film plays like an unwieldy hybrid of Titanic, a romantic comedy, and virtually any sci-fi drama ever made about the emotional costs of space travel. Jon Spaihts’ screenplay has floated around for years, featured on the Blacklist way back in 2007, and now reaches theaters in what one can only imagine is a very different form than it took when it first started. That imagination is necessary, because the screenplay is precisely what elevates Passengers from a mediocre, bloated sci-fi adventure into a film so utterly tone-deaf at nearly every turn that it leaves you wondering, after a time, how any of the talent involved could have wanted to be.

The trouble starts with the unremarkable cleanliness of its presentation. Morten Tyldum, fresh off his Oscar nomination for The Imitation Game, draws the clean lines and sterile aesthetics of so other film spaceships when imagining the Avalon. While the design of the ship itself is interesting, a double helix perpetually cycling around its own fusion-run power core, the interiors offer little to distinguish the Avalon from 2001’s XD-1 or any of its other clear influences. Though the existence of the Avalon as a luxury cruise liner of sorts explains this up to a point, the film does little with the ship as an additional character beyond either blocking its protagonists or threatening to kill them. And in a film that’s essentially a two-hander with a robot sidekick, Passengers leaves these opportunities woefully unexplored.

Tyldum’s clean-but-unmemorable aesthetic choices extend to the film at large; he keeps the focus on the actors as often as possible, and the film’s small handful of grander setpieces fail to leave much of an impression. In one, Aurora is trapped in the ship’s pool when the gravity fails and the water forms into a series of giant bubbles, and it hews far closer to absurd than to the intrigue the scene so desperately covets. In another, a character ends up drifting through space, and is only saved by an outstretched cable, at which point Tyldum takes it upon himself to directly lift the best shot from Gravity. (Earlier, a slingshot around a burning star likewise recalls Danny Boyle’s underrated Sunshine.) The intrigue of the film is rarely driven by its action, and when it is, the staging is perfunctory and little more.

That intrigue instead comes from the human drama, and that is the exact point at which Passengers starts to go triumphantly wrong. After Aurora is awakened, and given the unsettling circumstances under which she is, one might find themselves hoping that Passengers will engage with it in a more thoughtful manner. Instead, the middle hour of the film largely concerns itself with the “meet-cute” and subsequent courtship between the two, until eventually their total isolation and movie-star looks get the better of both of them, and a romance begins to flourish in the unlikeliest of places. Were the film savvier about its own premise, it would take virtually no alteration to turn Passengers into a space-age riff on 45 Years, but alas.

By this point, Passengers starts to resemble a ridiculous fake movie inside of a Hollywood satire more than a thought-through science fiction thriller. Lawrence and Pratt do their best with alternately rote and nonsensical material, but the effort eventually begins to read like scenery-chewing, particularly when the secrets start to come out and the trouble with the ship begins. And there’s little tension behind the payoff to the former; Passengers is the sort of film which hinges its entire existence on the reveal of a single secret, and spends most of its climax attempting to wring even a little bit of drama out of its fallout. Even when it strains its way to two hours by including a third crew member being prematurely awakened, Passengers seems far more concerned with close-ups of its stars than with any of the space travel conundrums it raises, most of which just exist for the sake of either hackneyed drama or set dressing.

The film paints Jim as marginally sympathetic at best; not enough time is spent on his isolation, or with the right gravity of tone, to suggest that his desperation justifies the choice he makes, and instead of trying to engage with the hostage situation the film eventually outlines, Passengers spends most of its back half attempting to retroactively justify the abysmal storytelling that came before. Aurora, for her part, is the kind of thinly written character that will undoubtedly inspire thinkpieces in the weeks to come. An actor of Lawrence’s caliber deserves more than what she’s offered here, in which she’s asked to deliver lines like “I can’t live on this ship without you” with conviction. By the time the film eventually settles on “action movie, mostly” as its mode, the emotional weight for which it so desperately strains is so irrelevant that you might find yourself imagining all the better ways in which this same story could have been told.

Passengers will be remembered most for its campy plot twists and the unsettling nature of its story, but an ironic reading down the line might be the only one that makes it tolerable. If you take away the unintentional laughs and the ham-handed love/space metaphors, all that remains is a barely-servicable space thriller with a pair of stars who struggle to elevate tired material. Yet it’s so spectacularly inept, at so many different points, that it’s hard to imagine anybody will be able to forget it. It’s not a good movie by any stretch of the imagination, but it’s the kind of bad movie that audiences with the taste for that kind of thing will eat up by the spoonful.