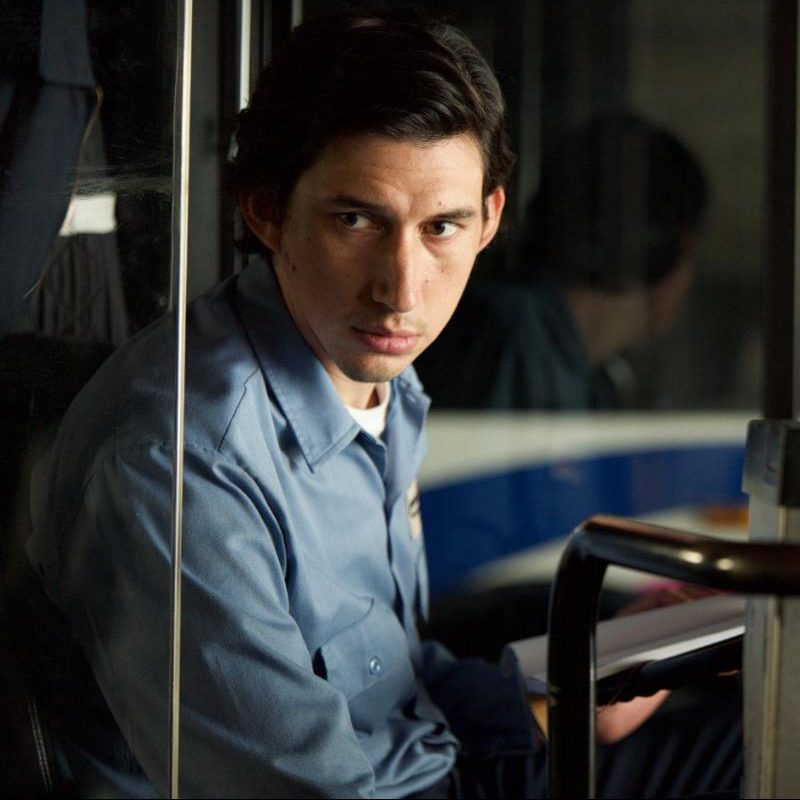 The following review was originally published as part of our coverage of the 2016 New York Film Festival.

Paterson is a man of routine. He wakes up at 6:15 a.m. every morning next to his wife, Laura (Golshifteh Farahani), who spends her days painting the curtains and teaching herself to play the guitar. Born in Iran, she dreams of becoming the Persian Dolly Parton and taking Nashville by storm. There’s a first for everything.

Paterson drives a bus and writes poems on his lunch break; rich in the lush detail of the ordinary, his perceptive odes to the world unfolding around him recall early William Carlos Williams. Paterson’s favorite is a love letter to Ohio Blue Tip matches. When the man sees a young girl writing on his walk, Paterson waits with her and she reads a poem from her journal. She describes the air as falling like hair. He goes home, walks the dog, and goes to sleep, waking up to repeat the cycle the next day. In his tranquil simplicity, Paterson is, as Williams once wrote, “the happy genius of his household.”

The character, who is named for the New Jersey town he calls home, is the subject of Jim Jarmusch’s 13th feature, which also happens to be called Paterson. One of the director’s finest to date, the film derives its unique power from the repetition of daily life, elevating the mundane to a kind of divinity.

If Henry David Thoreau once opined that “most men lead lives of quiet desperation,” Paterson — as played by the ever-versatile Adam Driver — is just quiet. He mostly listens, whether it’s to a conversation between young college anarchists who discuss politics on the bus (Kara Hayward and Jared Gilman) or the coworker (Rizwan Manji) who complains that his cat has diabetes. His wife, meanwhile, waxes lyrical about her aspiration of the day as if the idea had suddenly come to her in a dream. But what does Paterson want?

Paterson is about the artistic process of a man who could be a great poet, if he would let anyone read his work. The title character lives a life of observation, burying himself in his secret journals, but he refuses to publish.

In Woody Allen’s Vicky Cristina Barcelona, an aging, tortured writer refuses to share his work with the world because he doesn’t think people — lazy and selfish — deserve to have them. Paterson’s denial is based not in egotistic misanthropy, but a vague shyness. He likes his life, which concludes at the end of every day with a drink at the corner bar, and doesn’t want to ruin it. Paterson shares local bits of trivia with the bartender, Doc (Barry Shabaka Henley). The two men agree that Lou Costello, of the famous comedy duo, is the city’s most famous resident. Allen Ginsberg, after all, never got his own statue.

Williams, who wrote poems on his medical pad in between shifts at the hospital, described Paterson in a six-part epic poem as “the city of cheap hotels and private entrances, of taxis at the door, [and] the car standing in the rain hour after hour by the roadhouse entrance.”

For Jarmusch’s protagonist, the city is the rush of the Passaic River as it crashes into the rocks at Great Falls. Paterson visits there often, using the waterfall’s languid tumult as a source of inspiration. It’s the aspiring rapper (Method Man) he discovers practicing rhymes to himself in an empty laundromat, whom he instantly recognizes as a kindred spirit. It’s the cupcakes his wife bakes for the local bake sale, a woman he describes approvingly as knowing him well. Given the character’s proclivity for silence, this appears to be Paterson’s highest compliment.

Jarmusch’s film deals with a subject rarely tackled by contemporary cinema — the everyday reality of post-industrial America. Very little happens in Paterson, which is perhaps the point. The town is defined by its very stasis, where the daily act of coming together with the same people for a beer becomes a kind of religious rite.

Small things, however, disrupt the cadence of the expected. Everett (William Jackson Harper) is broken up with by his reluctant girlfriend, Marie (Chasten Harmon), who believes they should have remained friends. He begs for her love each night at the bar, and Marie denies him. One evening, Everett comes in and threatens her with a toy gun. Paterson disarms him before realizing the ruse. While Paterson is driving, the power on the bus suddenly goes out, forcing him to pull over to the side of the road. It shatters the illusion that everything can stay the same forever.

Paterson at times recalls Richard Linklater’s Slacker, another story about characters casually going about their day. Like Linklater, Jarmusch is interested in what these people discuss with each other and what it says about them. For Paterson, whose writing is heard in voiceover, these snippets of conversation are what fuel his art.

The film, though, is maybe too in love with its own rhythms. Paterson, like an amiable guest too polite to say goodbye, overstays its welcome by around 15 minutes. Williams, to his credit, understood the beauty of brevity. His best-known poem, “The Red Wheelbarrow,” builds a beautifully imagined world in just four lines. But while lackadaisical at times, Jarmusch’s film builds to a stunning climax as poignant as anything you’ll see in a cinema this year. Paterson, after an unfortunate accident, is forced to start over again. Will it compel him to strive for a life outside of the one he knows?

Paterson, befitting its narrative structure, ends as it begins — with an alarm that wakes its protagonist, curled up next to the kind woman who understands him best. The film, which finds its poetry in our humanity, suggests that’s the best that any of us can hope for.