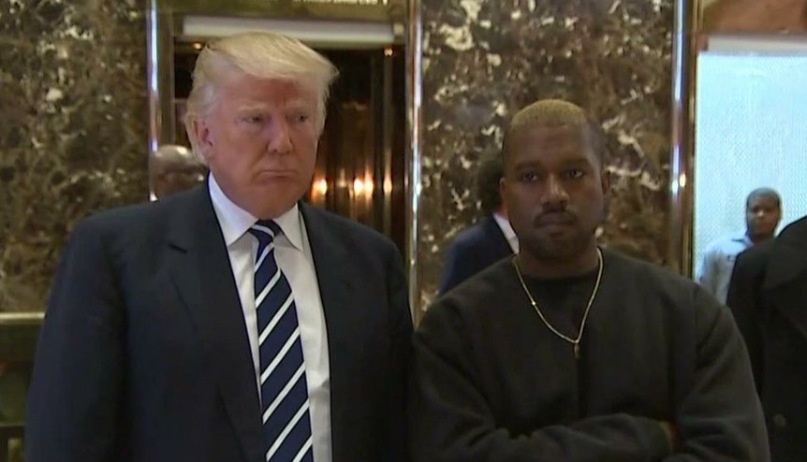 During a recent concert, Kanye West famously and controversially came out in support of Donald Trump. Now, he’s meeting face-to-face with the President-elect.

Cameras caught West and his entourage walking into Trump Tower shortly after 9:00 a.m. Tuesday morning. According to NBC’s Katy Tur, West was scheduled to meet with Trump and a transition official, though the exact nature of their discussions was not disclosed. TMZ adds that West personally requested the meeting, which lasted about 15 minutes.

Following their meeting, West and Trump appeared together in the lobby of Trump Tower and posed for pictures. Trump told the press pool that he and West “have been friends for a long time.” He declined to elaborate on the topic of their meeting, saying only that they spoke about “life.” Before leaving, Trump told West “I’ll see you soon” and the two embraced.

Update: West met with Trump to discuss an “ambassador role of sorts,” possibly an “entrepreneurial leadership role.” Contrary to a previous report, the meeting took place at the request of Trump.

Update: According to Kanye, he spoke to Trump about multicultural issues, including “bullying, supporting teachers, modernizing curriculums, and violence in Chicago.” He added, “I feel it is important to have a direct line of communication with our future President if we truly want change.”

I wanted to meet with Trump today to discuss multicultural issues.

I feel it is important to have a direct line of communication with our future President if we truly want change.

Kanye (and entourage) arrives for a meeting at Trump Tower. Real life. pic.twitter.com/W9PQDgfQmg

During a concert in San Jose last month, West publicly announced his support for Trump, calling his approach to victory “absolutely genius.” He also said that while he didn’t vote in the election, if he had “I would’ve voted on Trump.”

“There’s nonpolitical methods to speaking that I like, that I feel were very futuristic,” West told the audience. “And that style, and that method of communication, has proven that it can beat a politically correct way of communication. And I fuck with that.” He went on to say that Trump’s campaign wasn’t just “entertaining — I actually think that his approach was absolutely genius. Because it fucking worked!”

“I’m not saying this to diss celebrities at all, particularly on the democratic side — that’s cool,” West continued. “I just hate the fact that because I’m a celebrity, everybody told me not to say that I loved the debates. I loved [Trump’s] approach. It be like, white people that’s racist, running around saying nigga now. If people are racist and they feel more inspired to say how they feel, then they’re exposing themselves, bro. This is what I’m saying. It’s already the beginning of change. Sometimes things that you might think are bad need to happen, in order for change to fucking happen. Sometimes you might have to not get your way to really understand what to do in the future, to be able to get your way.”

West previously expressed interest in running for president himself. He told the audience that the success of Trump’s campaign reaffirmed his convictions. “Rappers are philosophers of our now, celebrities are the influencers of our now, just look at the president. [Trump] wasn’t in politics and won.”

Not surprisingly, West’s comments were met with criticism. Inside the arena, he was booed. Outside, the reaction was just as unfavorable; DeRay Mckesson, a leader of Black Lives Matter, tweeted, “This isn’t the first time he’s said statements that don’t quite make sense to us.”

Less than a week after the concert, West was checked into a psychiatric ward after being diagnosed with “temporary psychosis due to sleep deprivation and dehydration.” He remained hospitalized for nine days before finally being released on November 30th.