Any attempt at a boycott has already been ruled "invalid" 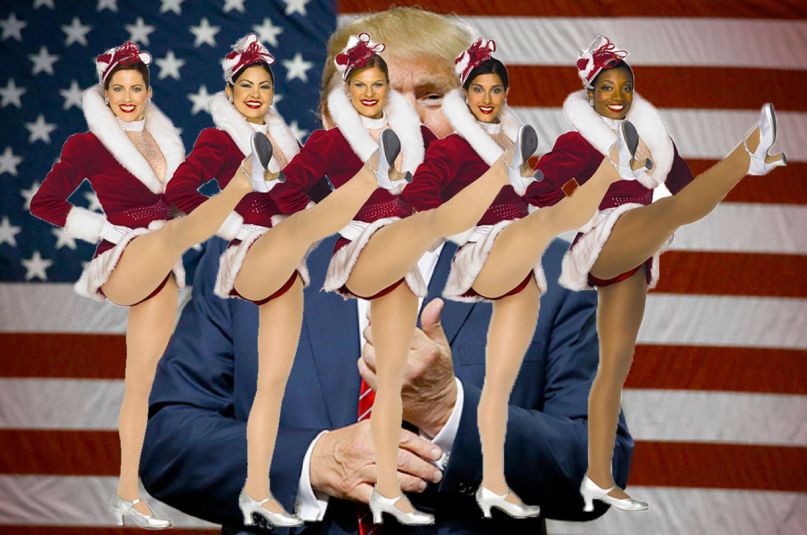 President-Elect Trump’s team has really been struggling to find talent to perform at the inauguration events going on throughout Washington, DC next month. KISS won’t do it. Elton John won’t do it. Celine Dion won’t do it. Even Andrea Bocelli won’t do it (though that’s mainly Trump’s fault). It now looks as if Team Trump has finally found a group of performers who will actually appear at the inauguration — because they’re contractually obligated to do so — the Radio City Rockettes.

News of the famous high-kicking dancers’ participation came from a statement by James L. Dolan, executive chairman of the Madison Square Garden company, which owns the Rockettes. Dolan called the group “treasured American icons” and recalled their participation in numerous Super Bowl halftime shows, the Macy’s Thanksgiving Day parade, and George W. Bush’s inaugurations in 2001 and 2005. “We are honored that the Rockettes have again been asked to perform in the upcoming inauguration festivities,” the statement concluded.

However, it seems the dancers themselves may not feel so honored. In a since deleted Instagram post (via The Hollywood Reporter), dancer Phoebe Pearl wrote:

“I usually don’t use social media to make a political stand but I feel overwhelmed with emotion. Finding out that it has been decided for us that Rockettes will be performing at the Presidential inauguration makes me feel embarrassed and disappointed. The women I work with are intelligent and are full of love and the decision of performing for a man that stands for everything we’re against is appalling. I am speaking for just myself but please know that after we found out this news, we have been performing with tears in our eyes and heavy hearts. We will not be forced! #notmypresident”

Pearl’s protests are likely to go ignored, unfortunately. An email obtained by BroadwayWorld from an administrator for the American Guild of Variety Artists to the Rockettes stated that all full-time dancers are “obligated” to work and preemptively squashed any talk of a boycott as “invalid.” “We have received an email from a Rockette expressing concern about getting ‘involved in a dangerous political climate’ but I must remind you that you are all employees, and as a company, Mr. Dolan obviously wants the Rockettes to be represented at our country’s Presidential inauguration…” read the email. Part-time dancers are allowed to opt out of participating.

The AGVA email went on to say, “This has nothing to do with anyone’s political leanings (including AGVA’s), it has to do with your best performance for your employer, period. I will reiterate that if Hillary Clinton was the President-elect, nothing would be different, and there would probably be those who would not want to be involved because of her. It is a job, and all of you should consider it an honor, no matter who is being sworn in. The election is over and this country will not survive if it remains divided.”

“Everyone is entitled to her own political beliefs, but there is no room for this in the workplace,” it concluded.

Update (11:50 AM): In a follow-up statement, the Madison Square Garden Company contradicted the AGVA email, saying that all Rockettes have the choice whether or not to perform (via THR). “The Radio City Rockettes are proud to participate in the 58th Presidential Inaugural,” read the statement. “For a Rockette to be considered for an event, they must voluntarily sign up and are never told they have to perform at a particular event, including the inaugural. It is always their choice. In fact, for the coming inauguration, we had more Rockettes request to participate than we have slots available. We eagerly await the inaugural celebrations.”

Despite Trump tweeting that there are A-list celebs “all wanting tixs” to the inauguration, many have come out in support of those Rockettes dismayed by their (reportedly) forced performance.

Thank you for this, @duarteamanda. Already sent my e-mail. Everyone else please do likewise? pic.twitter.com/WOgcvaJqoy

No one should be forced to do anything against their will, not women nor men, whether performers or not. AGVA must protect their artists. https://t.co/E9pdPAAwp6

If the Rockettes do actually end up dancing during Trump’s inauguration, they’ll do so alongside 16-year-old America’s Got Talent alum Jackie Evancho and the Mormon Tabernacle Choir, the only other confirmed performers.