The band cover existential dread without losing an ounce of passion 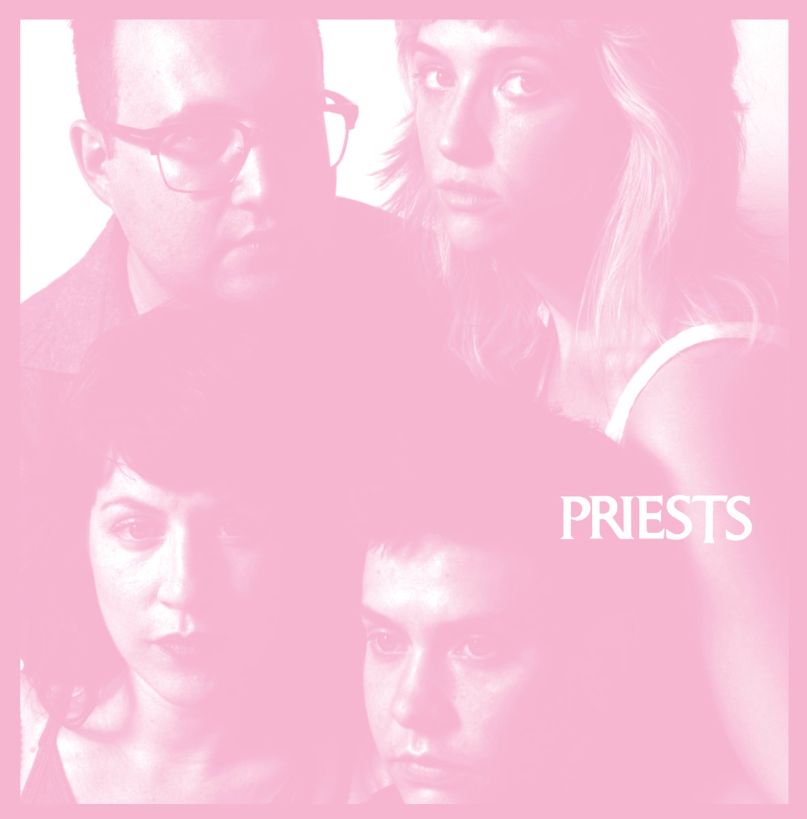 “Barack Obama killed something in me,” Katie Alice Greer howls at the end of “And Breeding”, a highlight of 2014’s excellent Bodies and Control and Money and Power. The brief, yet thrilling set of tunes from Washington, DC, quartet Priests looked out at a world of supposed liberality, hope, and change, and still saw plenty to fight against and fight for. “Barack Obama killed something in me/ And I’m going to get him for it,” she promised. It’s tempting, then, to wonder how Priests fit in in this new America, with this new president, to paint them into the dichotomy corner that we tend to force “political punk” bands into: “Who’s in charge now, and who do we think is better?” But if the last few months have taught us anything (and I hope they have), things don’t work that way. Priests know that. They were fighting before there were giant neon signs demanding it, and they were fighting with personal nuance, perspective, and care.

That continues on Nothing Feels Natural, the band’s first proper full-length, a record that continues to embody and personalize rebellion as well as expand their musical palate so that even that can’t be limited by the boundaries of punk. “We’re the bastard child of wanting to do the right thing in a world where the right thing doesn’t exist anymore,” Greer offered in an interview with Wondering Sound a couple of years ago, explaining that Priests make songs as an attempt to talk about the things that other people are “wondering about when they’re falling asleep, or during their lunch break, or when they’re feeling sad for reasons they can’t understand.”

Frequently, facing things we can’t understand results in rage or incredulity, tones that Priests struck expertly on Bodies and Control through jagged post-punk, spindly no wave, bared teeth, and raised eyebrows. From the opener of Nothing Feels Natural, “Appropriate”, Priests display a greater ability to show that there’s plenty of anxiety, frustration, and uncertainty in the gray areas between the screaming and the flailing. The song opens on Daniele Daniele’s thumping drums and Greer’s echoed shout about “some new brutalism.” She adds some lines about eating maggots and Wheel of Fortune, but then things start to deviate after the two-minute mark (about where you might expect a Priests song like this to end): Taylor Mullitz’s bass strides slowly into frame, cymbals and thready guitar raise out of the corners, and jazz saxophonist Luke Stewart spookily skronks through the middle. Greer re-enters, looking straight down the barrel of the camera: “You and me both know about dishonesty.” It’s commiseration and accusation in one, her stare level and knowing.

That they then pivot so seamlessly to the positively breezy tone of “JJ” is the proof of their growing confidence and skill. GL Jaguar’s guitar rides the surf waves out-of-tune piano, Daniele again prodding things along on the cymbals. This is a unique sort of snarl for Priests, though, one in which Greer can sum up the problems in a relationship in choice of cigarettes; the ex chose “the baby-est” Parliaments while she went for something a little tougher (“I thought I was a cowboy because I smoked reds”).

The diversification of Greer and Jaguar’s performances work wonders here, bringing even more depth to their emotionally resonant messages. The wild-eyed sneer of “Appropriate” and the smoldering lava of “Nicki” stand clearly apart, delivering wildly different emotions, each so intensely felt. Some experiments work better than others — the laconic “Leila 20” lacks punch, and the orchestral “Interlude” is pleasant but doesn’t attach to its surroundings — but the range of the experiments is clearly intentional. Rather than lock into one type of passion, they offer an entire menu. For those not ready to raise sharpened claws, the new wave-y title track gives some uneasy space (“This is when I’d give a god a name/ But to people in sanctuaries/ All I can say is you will not be saved”). The dive-bomb guitar burn of “Pink White House” and the scraggly Contortions range of “Puff” give each significant color, while Daniele and Mullitz keep things moving and moody at all costs, ensuring the ship won’t crack under its own weight.

While it’s true that Priests are thinking about what we think about while trying to fall asleep, Nothing Feels Natural feels closer to the innermost concerns, qualms, and fears that the quarter themselves think in those late hours. The album sincerely embraces every dark corner of the brain, not just the ones that are easiest to sum up. Nothing Feels Natural is daring, sincere, and intimate, somehow more universal in its particularity. “All the science and evolution and progress, I mean, it looks good from a distance, but when you’re really inside of it you realize it’s fucking terrifying,” Greer says on the Daniele-penned “No Big Bang”. It turns out Priests cover existential dread as well as they rage at authority, consumerism, and disposability, without losing an ounce of passion or connection.