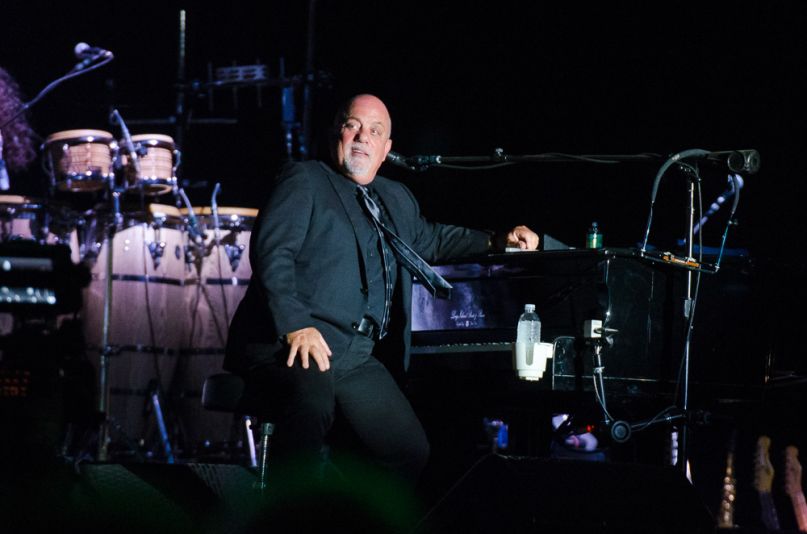 On New Year’s Eve, Billy Joel got to fulfill what has probably been a long-awaited dream: He played a concert at the BB&T Center in South Florida and rang in Miami 2017 with “Miami 2017”. If setlist.fm is to be believed, he even waited until just past midnight to launch into the song. Add in the fact that Mariah Carey’s awful performance undoubtedly put out some of the lights on Broadway, and you have one of the more fitting song performances in recent memory.

This song has always befuddled me. It’s one of Joel’s hardest rockers, and when he plays it live, he often fleshes it out with strings and brass to produce a gargantuan wall of sound. Folks go nuts for it. But if you look carefully at the blurry footage above, you’ll notice the CGI backdrop of the New York City skyline burning. That befits the lyrics, which describe the utter destruction of Manhattan. Of course, it’s nothing new for doomsaying, fatalistic songs to inspire raucous cheering and dancing (see the 1970s punk movement), but “Miami 2017 (Seen the Lights Go Out on Broadway)” isn’t just about an apocalypse; it’s about the strange combination of hope, apathy, and frustration that arises out of crisis. And as we put the Year of Death to rest and welcome in the Year of Post-Mortem Anxiety, it’s worth thinking about how the song’s meaning to New York has changed over the years, particularly before the internet thoughtlessly turns it into another round of Back to the Future Part II.

Joel wrote “Miami 2017” in the wake of New York’s 1975 bankruptcy scare, when Gerald Ford famously refused to use federal funding to bail out the city. With the possibility of a government shutdown looming, the Big Apple freaked out. But Joel, ever the proud, tough New Yorker, chose to return to Manhattan from Los Angeles. He’s a better storyteller than I am, so I’ll let him explain more fully:

Typical Joel, raising a middle finger to the rest of the country while simultaneously ragging on the Chicken Littles of the Manhattan media. To such a jaded guy — a man who, in 1970, attempted suicide by drinking furniture polish — it must have seemed that everyone was catastrophizing, that New York would obviously survive, even if the city had to default. Over the course of “Miami 2017”, he points out that places like Times Square and Harlem were already in shambles and that many of the rich folk had already left for the Palisades in their Cadillacs, but those who remained would still go “right on with the show.” And sure enough, that’s what happened. New York remained a crime-ridden, dangerous city for much of the ‘70s and ‘80s, but the city and its citizens made it through the bankruptcy crisis, and NYC is now a thriving, relatively safe place. Many of the folks who remember the financial near-disaster of 1975, in fact, have likely fulfilled the song’s prophecy and moved down to Florida, where they can tell the story to grandchildren who are too busy on their dang smartphones to pay attention.

The song, in essence, functions like a good kick in the ass to remind New Yorkers of their civic pride and grit. In the wake of 9/11, that was more necessary than ever, and so Joel decided to perform “Miami 2017” at the Concert for New York. He told the crowd, “I thought it was going to be a science fiction song. I never thought it would really happen. But unlike the end of that song, we ain’t going anywhere.” In other words, unless Manhattan literally sinks out at sea, New Yorkers should be honored and determined to stand with their city rather than leave it. Joel delivered this message again in 2012, when Hurricane Sandy almost did sink Manhattan. He didn’t even have to deliver it after a terrorist set off an explosion in Chelsea in September; the lights weren’t going out on Broadway, so there was no reason to do anything but shrug off the attack and continue with life. People that night (myself included) were more irritated that the 1-2-3 was shut down between 4th and 34th than they were scared of becoming a victim.

Donald Trump, though, represents a very different kind of threat to New York. He simultaneously embodies everything it stands for — fame, capitalism, (the appearance of) wealth — and everything it stands against. The sixth-most diverse city in the country has seen a native son embrace the completely foreign xenophobia of flyover territory and ride the tide of anti-elite sentiment to the presidency. A city in which 79% of the residents voted for Hillary Clinton is spending more than $500,000 per day protecting the Tweeter-in-Chief, who will bring demagogic quasi-fascism home with him into the thrumming heart of American culture. This is not an external threat like a terrorist attack, a superstorm, or an intransigent Gerald Ford. This feels more like an insidious cancer: New York’s own product attacking its prevailing values from within its borders. For many in the city, it probably feels as though the Manhattan skyline is ablaze and Joel’s apocalyptic song displays eerie portent. We had enough “stop it 2016” memetrash online to tell that “Miami 2017” will almost certainly be stripped of its nuance by the social media engines and, at some point, make the rounds as a bastardized prediction-gone-right.

But this is where the hard-nosed Joel pulls through. Most of the New Yorkers in “Miami 2017” don’t leave the city behind — just the Yankees, the folks in the Palisades, and the handful who survive in Florida, none of whom could be called heroes. Instead, the city’s remaining residents throw a massive underground concert in Brooklyn, and as Joel sings this verse, the full band jumps in and electrifies the song from a melancholy ballad into a rollicking anthem that celebrates the city’s indomitable vitality in the face of danger. This is the New York that needs to prevail in 2017: a city that recognizes that the Empire State hasn’t been laid low; that wrenches itself out of any neurotic, viral spiral; that makes every effort to preserve its American values, even when the devil lurks inside the walls.

Billy Joel’s going to keep up his monthly Madison Square Garden residency this year. It will be fascinating to see what he does with “Miami 2017” and how the crowd responds. But to honor the song’s true meaning, New York must go right on with the show instead of devolving into hysteria.