By playing it safe, the festival has shut out the heaviest and most vital strands of indie rock 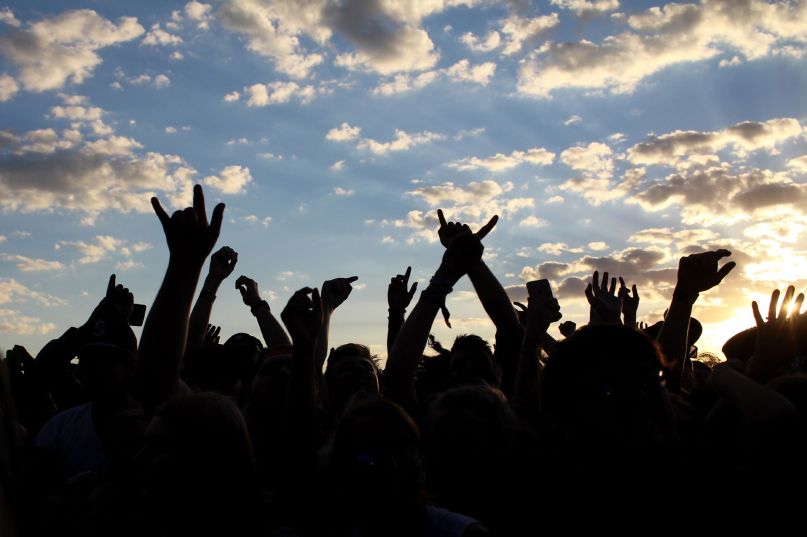 Punk as Fuck is a monthly column in which Associate Editor Collin Brennan discusses issues in punk music and culture. This month’s column examines the near-total lack of punk and metal in Coachella’s 2017 lineup and explores what it means for the festival’s future.

On a cool April night back in 2016, the San Francisco metal group Deafheaven took the stage at Coachella’s Mojave tent. Less than a year removed from their 2015 album, New Bermuda — one of the most expansive and progressive metal releases of the decade — the band were on the tail end of a victory lap in which they had grown accustomed to playing sweat-soaked, physically demanding shows to an audience that rarely failed to meet their intensity halfway.

But the audience that greeted Deafheaven at Coachella was hardly an audience at all — more like a smattering of bodies spread out over a depressingly large canvas of grass and dirt. Blame it on the late start time or blame it on the fact that, elsewhere on the festival grounds, hundreds of thousands of fans were converging in a throbbing sea to watch the Scottish producer, DJ, and glorified button-pusher Calvin Harris star in one of the most offensively generic headlining sets in Coachella’s 17-year history. However you frame it, Coachella’s best (and really, its only) metal act of 2016 turned out to be a fantastic, mostly unwatched dud, and for reasons that could hardly have been attributed to the act itself.

One of the few punk acts of the weekend, Philadelphia’s Sheer Mag, suffered a similar fate when they were forced to play an abbreviated noontime set that ended before most of their would-be crowd could even make it through security. In fact, of the microscopically small sample of punk/metal/hardcore acts on Coachella 2016’s lineup, the only ones that seemed to get any kind of break from scheduling were Rancid and The Damned — fine groups, both, but also legacy acts several decades removed from their best work.

When the dust settled on an otherwise successful weekend, the overall impression was that Coachella’s organizers had dropped the ball on offering punk and metal a meaningful platform at their festival. Still, it was a bit too early to say they had finally, permanently, and unmistakably abandoned rock’s heavier genres. After all, 2015’s lineup featured Swans, Drive Like Jehu, Circa Survive, Joyce Manor, and a handful of other certifiably heavy groups. Going back further, one could find even more reason to hope that 2017’s lineup might cater more graciously to punk and metal fans. Tool won a coveted headlining spot in 2006, Refused came this close to replicating that feat in 2012, and the various tent stages have reliably hosted scene up-and-comers like Fucked Up, No Age, and Le Butcherettes throughout the years. Was it really so much to ask for one of the world’s major music festivals to at least pay lip service to two genres that have been a part of its fabric since the beginning?

The answer, judging by Coachella’s 2017 lineup, is apparently yes. Following a year that saw the continued resurgence of emo and the release of critically acclaimed albums by PUP, White Lung, Beach Slang, and many, many others, Coachella will feature fewer than five acts that fall anywhere along the punk or metal spectrum, and that’s being perhaps too generous. To add insult to injury, one of those bands, the New York-based hardcore trio Show Me the Body, were actually incorrectly listed on the lineup after refusing an invitation to play. “We were offered but we said no. Hopefully Goldenvoice and Coachella will not exploit our name,” the band wrote on Twitter.

UPDATE: We never agreed to play Coachella. We were offered but we said no. Hopefully @goldenvoice and @coachella will not exploit our name.

Given the dearth of other bands in their genre, it’s probably best for both parties that Show Me the Body won’t make a trip out to the desert. They would have likely suffered the same fate as Deafheaven last year, collecting a nice paycheck for the embarrassment of playing a set in front of a nearly empty tent. Every band has its own calculus of what is and isn’t worth the money, and there are likely many that would scratch and claw for the same offer SMTB turned down. But it’s fair to say that punk and metal bands can no longer expect a welcoming crowd (or, really, a crowd at all) at Coachella, and these most intense of genres happen to be the ones that suffer the most when paired with an empty, lifeless room.

The organizers can’t be blamed entirely for Coachella’s slow phase-out of heavy music, and their efforts to book at least a few token bands over the years (probably at the expense of higher profits) shouldn’t be overlooked. Music festivals are a money-making business above all, and it’s only natural for organizers to follow where the trends, and thus the cash, go. This path has inevitably led more to pop and hip-hop in recent years. Music analytics service BuzzAngle Music recently published its first-ever yearly report on US music consumption, which revealed that punk and metal account for less than 10 percent of total album sales — less than half of pop and hip-hop’s combined 22 percent. The genres that sell fewer albums earn fewer spots on stage, but even that truism can’t account for the near-total lack of representation punk and metal will get at Coachella 2017.

So, what’s going on here? Looking at the lineup’s uninspired mid-section more closely, it seems clear what happened. Rather than going after the alternative and underground bands that actually made great records in 2016, the organizers opted to fill their loosely defined “rock” quota with a healthy number of safe but entirely unexceptional indie bands that offer more crossover appeal for the festival’s growing pop audience. What these bands — The Head and the Heart, Two Door Cinema Club, Oh Wonder, Tennis, Local Natives, and Arkells, to name only a few — lack in terms of defining, singular qualities, they make up for in a surefire return on investment. It’s safe to assume that a fan of Radiohead or the xx could get down with any of the aforementioned bands, and so those bands have received coveted spots on the lineup, spots that might have otherwise gone to more crucial, if less obvious, acts like The Body, The Hotelier, Big Ups, or PUP. Throwing on a so-so ska punk band like The Interrupters is a nice gesture, but it doesn’t come close to acknowledging the fact that punk and metal currently account for the heaviest and most vital strands of indie rock.

Last year, it seemed that Coachella was at a crossroads. The New York Times opted out of covering the festival entirely, arguing that it hadn’t done enough to distinguish itself from the other major music festivals that have sprouted across America in recent years. This was certainly a valid complaint then, but it’s even more relevant in light of a 2017 lineup that’s undeniably solid but plays it safe far too often. Music festivals on the scale of Coachella have a responsibility to reflect the varied tastes of fans if they’re to be taken seriously as avenues of discovery, and in its latest iteration, the festival has essentially told fans of punk and metal to look elsewhere for their fix. It may be a savvy business decision given present-day demographics, but in the long term, taking risks and opening the door to underground genres seems like the better move. Not only does it serve as a bulwark against criticisms like the NYT’s, but it injects an air of unpredictably that’s all too often snuffed out by the prospect of watching Father John Misty or Mac DeMarco for the umpteenth time.