A beautiful exploration of loss and grief, all with the help of a big, tall monster 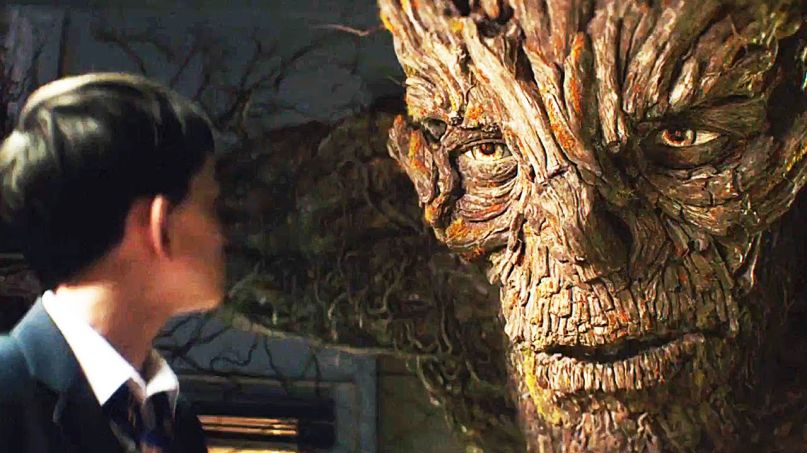 Note: The following review was originally published in September 2016 as part of our Fantastic Fest coverage.

“Tell me your nightmare and that will be your truth.”

A large tree-like creature holds a young boy in a King Kong grip — part Tolkien Ent and part Swamp Thing, the monster is a terror to behold. Red eyes burn from within his wooden, vine-covered face and a deep, gravelly voice echoes from his jagged maw. He has come to destroy the idyllic English countryside with the swipe of his claw and the stomp of his foot. The boy trembles in his grasp, and learns that this monster has a secret motive. His real mission is not destruction, but instead teaching and healing.

At its core, J.A. Bayona‘s A Monster Calls is a monster movie. However, any creature feature worth its weight in fur is really about what makes us human. As the monster of this tale explains, to know what scares us is to understand who we truly are. The monster is but a reflection of a deep, dark truth we cannot confront. Mixing horror movie imagery with honest, heart-wrenching human truths, Bayona has created a dark, coming-of-age masterpiece.

Adapted by Patrick Ness from his evocative novel of the same name, the film tells the story of Conor (Lewis MacDougall), a child coming to grips with the terminal illness and inevitable death of his mother (Felicity Jones). To help him navigate these harsh facts, a Monster (voiced by Liam Neeson) comes calling. Together, they explore the pains of growing up and the complexities of adulthood.

From the film’s first frame, the director places us directly within Conor’s childhood experience. The boy is constantly shut out of the adult world. We, along with Conor, only learn the facts of his mother’s illness second-hand or through mostly closed doors. The director has a Lubitsch and Bergman-esque obsession with doorways, with what they reveal and obscure. At its best, the film recalls the genius of the latter mastermind’s Fanny & Alexander and speaks to the existential terror of being a child.

Likewise, Bayona shoots the beginning of the film from the perspective of a child. Alongside cinematographer Oscar Faura, he keeps the camera low and the angle wide; as such, Conor’s house and all the other corollary environments become a looming, strange world. Aided by the gothic production design of Eugenio Caballero (an Oscar winner for Pan’s Labyrinth), the first half of the film exhibits a mystical, fairytale quality.

Throughout the film, the Monster tells Conor three stories, all fables, that teach a different lesson about the pitfalls of binary thinking. They feature tales of kings and apothecaries, where the line between good and evil is hard to define. As the Monster explains, “There is no good or bad. Most people are somewhere in between.” These three segments are presented with beautiful watercolor animation, and while they could have easily felt out of place, they blend in seamlessly with the esoteric world Bayona and Ness have created.

Namely because as Ness’ poignant story unfolds, Bayona keeps pace with visual, tonal shifts. For instance, as Conor learns about the harsh realities of loss, the film leans more and more towards realism. The warm, childlike colors of the film’s first half turn cold and harsh as the sweet, orange hues shift to stark blues. Actors are even filmed straight on, matching the fundamental, visual storytelling at hand. Moments of great tragedy and emotional resonance are interspersed with incisive gasps of levity. These moments are genuinely hilarious and a welcome respite from the tear-jerking narrative, proving that even at its dreariest, A Monster Calls never loses its playfulness and sense of childlike wonder.

Much of this success is greatly aided by the film’s dynamite cast. Although her part is minor, Jones is a delight as the tragic mother; her warm, loving presence filling each scene, even when she’s physically absent. Likewise, Sigourney Weaver and Toby Kebbell make great impressions, and their characterizations appear effortless. However, the majority of the film rests on the shoulders of MacDougall, a bright, new talent whose sweet and nuanced performance channels the complex emotions of pain and loss with aplomb. He’ll be around for a while.

The same can be said of the film’s imaginative director. Nearly 10 years ago, Bayona wowed audiences with his 2007 debut, The Orphanage, and won over more eyes and ears with his 2012 followup, The Impossible. With A Monster Calls, he displays the knowledge, assurance, and wit of a filmmaker truly coming into his own. Entertaining, tonally impeccable, and heartbreaking, this is a monster movie with a very human heart.