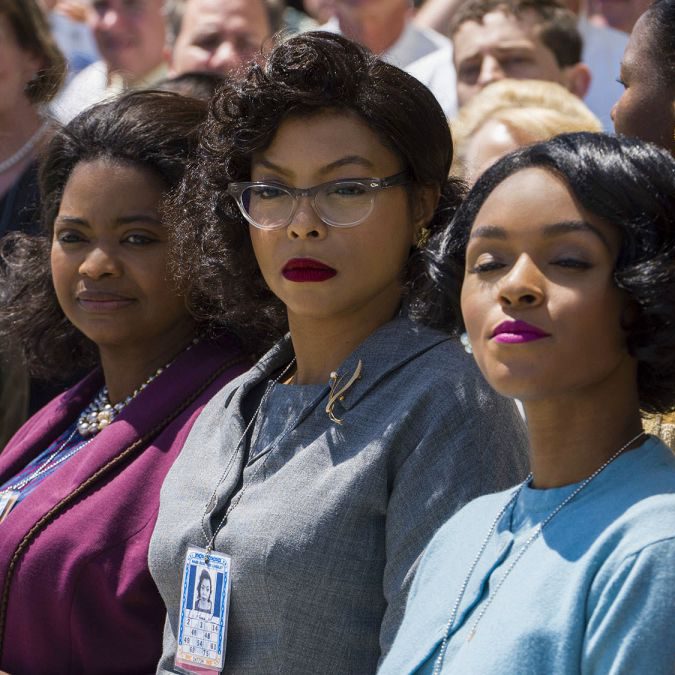 Hidden Figures is a feel-good movie that hurts, and the rare film based on historical events that feels both relevant and new. It’s there in the title, see. The women of this film use their brilliant minds to see numbers that others can’t — complex calculations for space travel, the language of computers, the math necessary to build a rocket — but they’re hidden, themselves. This is a movie about American heroes, but many who see the film will never have heard their names.

So let’s start there. It’s 1961, and Katherine Johnson, Mary Jackson, and Dorothy Vaughan (Taraji P. Henson, Janelle Monaé, and Octavia Spencer, respectively) work for NASA as members of the West Computing Group, a 20-person team made up entirely of women of color. Practically as soon as we meet them, the three are whisked off in different directions. Mary’s assigned to a team of engineers, where she’s encouraged by her supervisor to fight for the chance to become one herself. Katherine heads to the Space Task Group, an elite team headed by Al Harrison (Kevin Costner) that’s focused on, you know, getting a man into space. Dorothy, meanwhile, stays put, continuing to act as a supervisor despite not being given the title (or the pay), while eyeing the great new IBM that just rolled in the front door. All the while, they contend with racism and sexism — institutional and otherwise — and live out their daily lives, complete with kids, husbands, and even the odd suitor.

While director and screenwriter Theodore Melfi (St. Vincent) expertly captures the fevered energy of a group of geniuses being outpaced by the Russians in the throes of the Cold War, much of what keeps the film from tip-toeing into maudlin sentimentality comes from its contemporary resonance. Adapted from Margot Lee Shetterly’s book of the same name, Melfi and co-writer Allison Schroeder’s screenplay shows exactly how damaging inequality and bias can be to society’s progress, sparing time along the way to make math as exciting as any high-powered car chase. There are no moustache-twirling villains here, though Jim Parsons is only a few disgusted stares away from sprouting a handlebar as a disgruntled lead engineer. Instead, Melfi and Schroeder focus on black women who quietly excel while surrounded by white people who assume they’re on the janitorial staff.

That dynamic is reflected in the superb cast; the film is dominated by the terrific, energetic, and often moving performances of its three leads, and bolstered by the quieter but still excellent work of the supporting players. As Harrison, Costner perfectly plays the role of the curmudgeonly mentor, and in the film’s sole instance of a white person nobly taking down racism, he underplays it so superbly that it manages to bypass the chasm of cliché on which it balances. Kirsten Dunst, Parsons, and Kimberly Quinn fill in as well-meaning people whose biases, casual and otherwise, are worn as casually as a string of pearls, while Glen Powell radiates charm and courage as John Glenn. And Mahershala Ali shows up as a dreamy love interest whose romantic entanglement with Katherine is nearly tanked from the get-go, due to his early disbelief that women would be of use at a place like NASA.

Still, this movie belongs to the trio on the poster. Henson’s nuclear-powered charisma works surprisingly well when tucked behind a pair of horn-rimmed glasses, and when the mild-mannered Katherine finally gets pushed past the breaking point, her explosive response is so thrilling and satisfying that it makes the moment’s broad, Hollywood brushstrokes wholly forgivable. As Mary, Monaé gives her second terrific turn on the year (the other in Moonlight), imbuing the character with intelligence, determination, defiance, and what can only be described as sass (on seeing John Glenn: “It’s equal rights. I have the right to see fine in every color.”) Spencer, who’d land near the top of any list of cinema’s most reliable performers, plays Dorothy as a woman of tremendous intelligence and composure, quietly demanding respect for her work, her family, and the women she leads. Separately, all three are terrific, but they’re never better than when they’re together. Their shared scenes are filled with a kind of electric energy that can’t be faked. Just as Dorothy, Mary, and Katherine must have felt thrilled to be a part of something so momentous, it’s clear that to Spencer, Henson, and Monaé, this film means a great deal.

Hidden Figures is so winning, in fact, that it’s easy to overlook some of the film’s shortcomings. While the movie earns a great deal of goodwill and generally avoids anything that could be considered eye-rolling, there’s no denying that the film’s approach to storytelling is formulaic. In an early sequence, a young Katherine sees math in everything around her, shapes floating out of a stained glass window as she names them. The film never again returns to anything that visually daring, instead turning to stock footage of Kennedy speeches underscored with sweeping violins and rooms full of white shirts in which Katherine’s the only one wearing a vivid color. And while there’s a certain sweetness in the fact that Ali’s character isn’t developed beyond the role of love interest — after all, that’s a frequent occurrence for equivalent female characters — the fact remains that a terrific actor shows up mostly to be swooned upon.

Hidden Figures might have some familiar flaws, but they’re part and parcel of the type of feel-good film it is: an inspirational, family-friendly, based-on-a-true-story tearjerker cooked up with a formula that’s been working for many, many years. More importantly, it works within that formula better than any film like it in quite some time, an A+ in its subgenre. Hidden Figures might not be as groundbreaking as the women whose story drives it, but like those women, it does what it does very well. It might even inspire a few more young girls to reach for the stars, or at least for a pencil, and few things are more feel-good than that.