by Bryce Segall and Philip Cosores 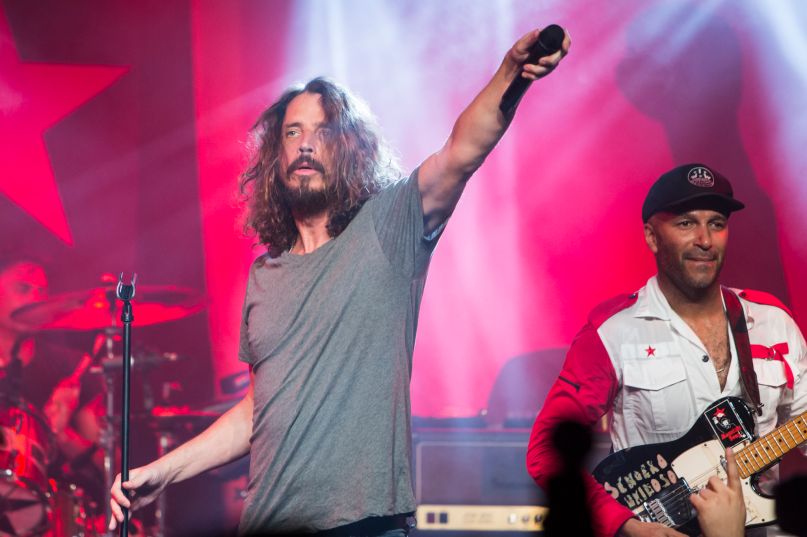 Make America Rage Again. It’s a spoof, a slogan, and exactly what protest supergroup Prophets of Rage did last night at LA’s Teragram Ballroom. Billed as an Anti-Inaugural Ball, the band were joined by a smattering of A-listers, B-listers, and yes, even Everlast, as they broadcast a simple message to those lucky enough to nab a ticket: “NOT MY PRESIDENT.” Entertainingly, we learned the phrase also now appears on the back of ringleader/Rage guitarist Tom Morello’s iconic “Arm the Homeless” guitar, which he showcased during an inspiring rendition of Bruce Springsteen’s “The Ghost of Tom Joad”, performed alongside show opener and American treasure Jackson Browne.

With festivities helmed by one of LA’s favorite sons, Jack Black, the night quickly flipped a day marred by the gloomiest of feelings into the kind of political… er… rager that would make anyone want to slam into some strangers, then immediately overthrow the government. Littered with charged rhetoric and speeches from Black (“They say you gotta respect the presidency, I say fuck that!”), Morello (“Defy, defeat, and drive out the Trump regime!”), and Public Enemy’s Chuck D (“Make racists afraid again!”), the show loudly set the tone of the next four years, proving that music may very well be the thing that saves us.

In addition to the aforementioned, the show’s eclectic lineup also boasted the likes of G.O.O.D. Music rapper Vic Mensa and the highly anticipated, highly unpredictable reunion of Rage’s other offspring Audioslave. With frontman Chris Cornell joining his former bandmates near the show’s end, the group resurrected a trifecta of cuts that drew solely from their self-titled debut, including mega-hit “Like a Stone”, early rocker “Cochise”, and the mountain-moving “Show Me How To Live”. Following a lengthy 12-year hiatus from the stage, it seems strange to think we had the thunderous presence of Rage Against the Machine in our lives even more recently, but perhaps that’s why hearing these tunes live for the first time in over a decade made for such an “a-ha” moment. These songs were arena-ready, and frankly, given the smiles onstage between them, in addition to Cornell’s ability to still belt those screams, it’s hard to imagine they won’t be returning to those massive rooms sooner or later.

Not to take away from the night’s official hosts, Prophets of Rage brought justice to their combined catalogs as well, blazing through a number of RATM’s timeless anti-establishment anthems, including “Bulls on Parade”, “Take the Power Back”, and the chantable “Guerilla Radio” among others. Dual frontmen Chuck D and Cypress Hill’s B-Real also offered up their own heavy-hitters, inviting a rather lost-looking Vic Mensa to join them on classics like Public Enemy’s “Bring the Noise” and Cypress Hill’s “Insane in the Membrane”. But it was special guest Everlast, who served as the night’s biggest surprise alongside Jack Black’s Tenacious D, that may have received the most raucous sing-along thanks to his House of Pain hit “Jump Around”.

Perhaps the evening’s most striking moment, however, was not brought via amps, but by a pair of young women, B and Z, whose sobering and triumphant poetry performance included blow-back lines like “There’s a child holding a copy of Catcher in the Rye, and a child holding a gun, but only one of these things has been outlawed by our government.”

Yet much like Obama’s presidency, all good things must come to an end, and in this case, that meant a stage-filling rendition of Rage classic “Killing in the Name”. Joined by Black, Cornell, and The Los Angeles Freedom Choir, the collective belted out a floor-shaking war cry of “Fuck you, I won’t do what you tell me” to a jovial and equally energized audience until sweat dripped from the walls and voices cracked. Toward the end, Morello and co. called upon the crowd one last time to mobilize in any way they can to take on the incoming administration, imparting a singular message that they’ve been saying for years. It has to start somewhere, it has to start sometime, what better place than here, what better time than now?