Recapping The Bachelor, Episode 4: Algonquin for “The Good Land”

This week, we head Midwest for cookies, farm life, and not-so-crazy ex-girlfriends 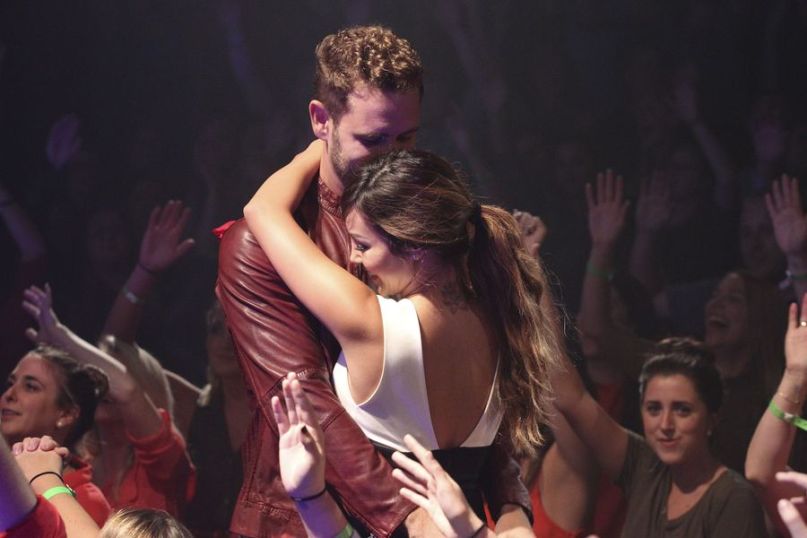 Salutations, Viallphiles. Let’s pick up where we left off last week: The Pool Party of Shame.

The Play By Play

Everyone in the house seems to have a problem with ladychild Corinne (the 24-year-old with a nanny and a taste for “cheese pasta”). And, of course, Nick’s insistence on keeping the Miami minx around isn’t helping matters.

Corinne creepily smiles in her sleep, in a brightly lit bedroom, dreaming of a future where she gets paid to hawk detox tea on Instagram…

…when she’s awakened from her afternoon nap by Taylor and Sarah. “I don’t know how the bounce house situation unfolded, but it hasn’t looked the best,” says Sarah.

Corinne pretends like she has no idea why anyone would be bothered by this, even after Taylor explains that the other women feel disrespected by her actions. “Why are Taylor and Tara so obsessed with me, I don’t know,” she declares, a strange thing to say considering her housemate’s name is Sarah, not Tara.

Time to break some hearts: Nick tells the group that he appreciates everyone’s honesty and thanks them for being patient and understanding of his need to make out with Corinne. Joining Danielle L., Rachel, and Vanessa in the rose zone are Raven, Taylor, Whitney, Kristina, Jasmine, Alexis, Astrid, Danielle M., Jaimi, Josephine, Sarah, and one other person. Any guesses? Of course, it’s Corinne. Goodbye to Christen and Brittany. We hardly knew ye!

The next day, Chris Harrison greets the remaining women with some good news, they’re about to embark on a journey AROUND THE GLOBE! First stop: Australia? Japan? Italy?

Nah, just Milwaukee. Actually Waukesha, a suburb of Milwaukee. But it’s special because it’s Nick’s hometown! This is considered “revolutionary” in Bachelor terms, as we usually reserve hometown visits for much later in the season. Can’t wait to see what sort of baggage—both emotional and travel-related—this trip will uncover.

Nick’s adorable parents are ready to meet up with their son in a controlled television environment for hopefully one of the last times. Nick’s father speaks on behalf of his wife and America when he says, “We don’t want to see you on this show again.” Best of luck, Mr. and Mrs. Viall!

No more parental advice. Time to join up with the ladies and ask Danielle L. on a one-on-one date. Nick confesses to the camera that while he’s definitely attracted to Danielle, he doesn’t really know her on a deeper level. As the couple strolls through town, we pass such Waukesha landmarks as the library where Nick used to make out with girls instead of studying and a bakery serving “Nickerdoodle” cookies:

Danielle and Nick continue their stroll down Main Street U.S.A. until The Bachelor stops dead in his tracks. Conveniently sitting in the window of a coffee shop is Amber, one of Nick’s exes!

What a most surprising coincidence! The three of them sit down together for a weird little chat, but it actually goes quite well. Nick and Danielle continue on their way and end up on a grassy knoll, swapping stories of high school loves. Later that evening over cocktails, Nick asks Danielle if she has “any obvious flaws”‘ (ugh) but she is not fazed—instead, she takes the opportunity to talk about her parents’ divorce and how it contributed to her emotional maturity at a young age and a desire to take her own relationships seriously. Nick feels the potential in their connection and gives her a rose. “I think things are off to an amazing start.”

Nick has one more surprise before the night ends.The lovebirds head over to the historic Pabst Theater where rising country star Chris Lane (a.k.a. winner of the “First Post-Backstreet-Boys Musical Guest” award) is in the middle of a concert. Nick and Danielle make their way to the stage so they can kiss in front of the entire city of Milwaukee.

Time to wake up bright and early with Rachel, Alexis, Vanessa, Jasmine, Jaimi, Sarah, Whitney, Kristina, Astrid, Taylor, Josephine, Danielle M., and Corinne for a day of work at a local dairy farm. Nick has made a few new friends…

…and while most of the women find this scene enchanting, Corinne starts complaining immediately.

Jaimi proved to be the most competent cow milker, in case that matters to anybody. But then the fun turns to shit (truly) when the girls are asked to shovel manure as their next task. Corinne escapes her poo-filled hell, breaking away from the pack yet again (and claiming a hand injury) to avoid group participation.

Later that night, Corinne uses the word “poopy” about 245 times in the span of three minutes. An excerpt: “I respect you for shoveling the poopy. I do. I really, really do. It takes a lot of courage and really, really blind sense of smell to shovel that poopy. But I had a serious hand situation.”

While Corinne spends most of the date thinking up wacky quotes to maximize her screen time, the other women try to take their relationships with Nick to new levels. Kristina says that she wants to open up to Nick about her past when the time is right, Vanessa gives our Bachelor a sentimental scrapbook made by her coworkers and students, and Rachel expresses her vulnerable side. It is through these moments that we see the gap between team “Here For the Right Reasons” and Corinne continue to grow. Attempts at connecting with Corinne on a mature human level prove futile.

And despite Corinne’s best efforts to butter Nick up, Kristina ends up with the date rose!

The following day, it’s Raven’s turn for a one-on-one. The date card said, “Let’s kick it,” so Raven guesses that they’re going to play baseball. Oy vey. No, Raven, you’re actually going to a kids’ soccer game. You know, the one with the ball that can only be touched by your feet. Kicked, if you will. This date is full of special guest stars, including unsung hero Bella (the youngest of Nick’s 10 siblings) and Mr. and Mrs. Viall. Raven handles Nick’s “Surprise! You’re meeting my parents!” twist like a pro. Her reward? Continuing the date at the roller rink as “Kiss Me” by Sixpence None The Richer plays on the PA.

This is the most 90s-inspired season of The Bachelor ever, and I love it.

Raven and Nick make their way over to the Milwaukee Art Museum, a beautiful and romantic setting for Raven to tell the tale of walking in on a cheating boyfriend. She goes into explicit detail of the sexual encounter she witnessed, which I cannot type here for fear that my recap will be marked by search engines as spam and/or pornography. Even after hearing that Raven beat her naked soon-to-be ex-boyfriend with a stiletto, he admits to loving her sassy attitude and gives her a rose. And Raven is all in.

Because ABC loves to make us miserable, we’re going to end with another “cliffhanger” episode this week—a stew of angry feelings at the cocktail party. Taylor is mad at Danielle L. for being the first to steal Nick away for private time. Corinne calls Taylor a phony and (with Josephine’s encouragement) cooks up a plan for confronting her.

Outside, in front of a crackling fire, Coriinne does not appreciate Taylor’s attempts at explaining the meaning of emotional intelligence.

We’ll have to wait and see how this plays out.

Until next week rose lovers! Until then, we'll be taking a nap ???? #TheBachelor pic.twitter.com/l4t3jmtvXO

Chris Harrison says the Corinne and Taylor situation will continue in craziness and one of them “won’t survive the week.” An alligator waits in a swamp, eager to swallow the woman Nick rejects. Things are getting brutal in Bachelor land.