The Rise and Fall of McDonald’s Happy Meals 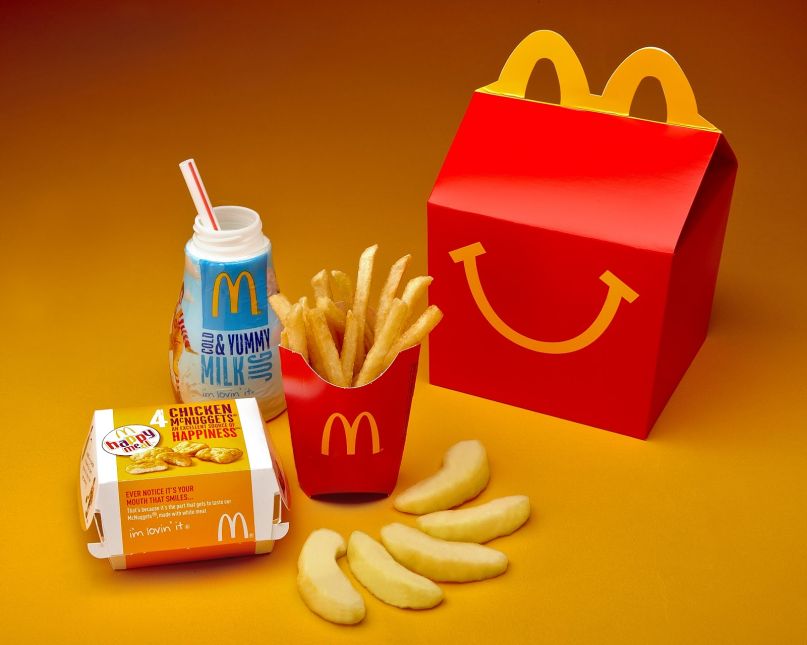 America is a country of simplified commercialism, and nothing illustrates that quite the way McDonald’s does. It’s been 76 years of golden arches that continue to glow. They popped up in every state as a beacon of affordable food, addicting french fries, and speedy meals. The fast-food chain swam overseas and began installing itself in countries that, on paper, hold entirely opposing views, like India with their religious restrictions on cow consumption or France and its dislike of fast food. America finds a way to work harder, faster, and longer than others; McDonald’s represents that with a smile. Yet out of all of the chain’s iconic creations, nothing holds a light to American culture quite like the Happy Meal, a last-minute addition to help lessen the difficulties of parenting.

Perhaps that’s the best place to start talking about the Happy Meal. Looking back, it seems like an obvious cash grab — create a miniature-sized meal to increase the number of customers with families — but McDonald’s introduced the Happy Meal after a Guatemalan invention saw rising success. Forget about Dick Brams, the St. Louis marketing manager attributed as the “father of the Happy Meal.” During the mid-1970s, Yolanda Fernández de Cofiño created a “Menu Ronald” to help parents feed their children with less fuss. She packed a hamburger, small fries, and small sundae in a bag, minimizing the time parents spent picking their child’s meal or debating nutritional benefits at the counter. When the McDonald’s headquarters in Chicago heard word of Fernández de Cofiño’s invention, they asked Bob Bernstein, the founder and CEO of marketing agency Bernstein-Rein, whom McDonald’s partnered with, to figure out an American take on it.

At first, creating a children’s meal seemed easy. Like Fernández de Cofiño, Bernstein decided to focus on smaller meal portions. Children could choose between a hamburger, cheeseburger, or small serving of Chicken McNuggets for the main item; french fries or apple slices for a side item; and milk, soda, or juice for a drink. But Bernstein knew there was more to it than that.

Kids wanted a clear distinction between their food and their parents’ food. Bernstein decided to give them that. Shortly after being assigned the task of bringing the “Menu Ronald” to American audiences, Bernstein took note of his son’s habits at breakfast. Instead of staring at his cereal while eating it, he scanned the cereal box’s illustrations over and over, drawing a line through its mazes and reading the jokes characters told. Bernstein instructed his creative team to set to work on paperboard boxes modeled in the style of lunch pails. The restaurant’s iconic Golden Arches, he told them, had to be handles. The company asked nationally known children’s illustrators to design content for the sides of the boxes, eight items total, that incorporated jokes, games, comics, stories, or anything else that might capture a child’s imagination.

In October of 1977, he introduced the Happy Meal to Kansas City markets with a 600 calorie (!) burger and, by 1979, brought the menu item to McDonald’s restaurants nationwide. To tie it together, Bernstein chose to add toys to the Happy Meal. This was the late ’70s, though, so McDonald’s threw in items like a puzzle lock, a spinning top, or branded items such as the McDoodle stencil or the McWrist wallet. Branding is key. McDonald’s capitalized on it in every sense of the word, from the shape of the Happy Meal to the items they packed within it.

It wasn’t until December of 1979 that McDonald’s partnered with outside forms of entertainment, thus crossing brands and, in turn, entering a world of unlimited options. Throw up a Vulcan salute. The first Happy Meal to promote a movie rolled out in tandem with Star Trek: The Motion Picture. Dubbed the Star Trek Meal, it harnessed Star Trek imagery to reach out to die-hard fans, regardless of age, by creating games inspired by the movie as well as a comic adaptation of the film. In order to complete a set of the toys, consumers had to buy multiple meals. Cue the Happy Meal frenzy that birthed collectors of all levels.

The ultimate branding move is to appeal to children. By nature, the Happy Meal does that, but McDonald’s swift collaboration with major motion pictures, animated TV shows, and popular games lured consumers who would otherwise never venture into their restaurants to suddenly purchase one, if not multiple meals in hopes of feeding their own fandom. They figured out the key to success — and their carabiner already clinked with a dozen additional keys.

Happy Meal toys ushered in a new McDonald’s cult they never intended. Back in 1990, a group of 18 adults in Ohio created the McDonald’s Collectors Club. Founder Linda Gegorski had been collecting Happy Meal toys since the early ’80s and decided to host a convention for fellow collectors she met over the years. She rented the Fremont Holiday Inn ballroom, offered tables to 50 people who had subscribed to her two fast-food newsletters, and she saw dozens turn to hundreds as the years passed by. The volunteer-run fan group has “an appreciation for all things McDonald’s,” but their love ties back to the toys, some for the nostalgia of playing with them, others for the fun of reselling them online, all of whom get a high by discovering a rare, international version of a toy.

Who can blame them? There’s a lot to collect. Hoarding picked up in 1987, the year the first Disney Happy Meal debuted. Since then, people of all ages rushed to McDonald’s to get their fix of pop culture, a result of the McDonald’s marketing team staying on top of their game. Happy Meals have included nearly every major franchise figure: Barbie, Transformers, Mario, Furby, Hello Kitty, Mickey Mouse, Simba, Nemo, Legos, Star Wars, Teletubbies, G.I. Joe, Batman, and all 101 dalmations. But nothing sparked a craze like Ty’s Beanie Babies, the holy grail of ’90s obsession that saw Americans queuing in line daily. McDonald’s sold over 100 million Happy Meals in 1997, the first year they included Teenie Beanie Babies in the box, which saw a light bulb go off. For the following three years, McDonald’s sold Teenie Beanie Babies and offered them once again in 2004 and 2009. Commercialism at its smartest.

However, shelf life applies to Happy Meal toys and, potentially, Happy Meals themselves. In 2016, the McDonald’s Collectors Club shut down for good as membership dwindled from 500 members to 35 members. Over a decade later, the Teenie Beanie Babies people banked on can be purchased for less than the cost of a Happy Meal. If a group of collectors can’t keep the fandom alive, who can?

More worrisome is the increase in health bans applied to the Happy Meal. In September of 2002, the parents of two obese teenagers filed a lawsuit against McDonald’s for the influence their product had on their children’s weight gain and resulting health problems, citing the Happy Meal toys as an influence. The following September, McDonald’s tested a new variation of the Happy Meal labeled “Go Active”, which offered up a salad, exercise booklet, and pedometer in favor of the usual items, but it failed to catch on. Healthier solutions like the addition of low-fat milk and apple dippers in 2004 stuck around, and, wisely, McDonald’s agreed to market the Happy Meal by exclusively picturing Chicken McNuggets and apple slices in advertising. In the last two years, McDonald’s added clementines to the mix, showing an awareness that the Happy Meal needs to be healthier if they’re going to actively target kids by including toys, although it’s a bit late.

The Happy Meal’s trajectory slips downhill with each passing year. McDonald’s arranged for free Happy Meal coupons to be printed on report cards for students who earned good grades in 2007; they falsely advertised the chicken and apples Happy Meal as 375 calories when a study by the Center for Science in the Public Interest revealed 93% of those sold exceed 430 calories, and numerous adults bring the company to court each year for misleading advertising that baits children to eat there too frequently.

The Happy Meal’s biggest downfall came in 2010 when San Francisco’s board of supervisors voted to ban Happy Meals from being served until McDonald’s complies with their guidelines: all meals that come with a toy must pack fruit or vegetables, and the entire meal, including the drink, must contain fewer than 600 calories. Though McDonald’s circumvented the ban by charging 10 cents per toy, a Centers for Disease Control study in 2014 proved the ban was effective. Kids’ meals were healthier in San Francisco after the veto.

Is it time to say goodbye to the toys? Maybe so. If there’s anything the past has taught us, it’s that frowning upon kid-enticing strategies isn’t good enough when children’s health is at risk, and cuddly toys don’t lessen the fat content of a McDonald’s cheeseburger. In 2013, McDonald’s created the McPlay mobile app, allowing kids to scan QR codes on Happy Meal toys to unlock games, quizzes, and digital content. As children wrap their hands around tablets and smartphones at a younger age each year, companies learn how to cater to them, and their products remain in high demand as a result.

So cling to those childhood toys and relish in the ones McDonald’s still puts out today. With places like Jack in the Box discontinuing free toys in kids meals and Taco Bell phasing out their children’s menu entirely, the future of McDonald’s appears as one filled with QR codes on Happy Meal boxes. It’s easier to store, it’s friendlier to the environment, and, most importantly, it’s cheaper. After all, this is America, and if there’s a way to cash in on commercialized culture, we’ll find a way to make it happen, even if states phase out the selling of Happy Meals county by county.