It's been eight years of massive artistic achievement amid massive suffering 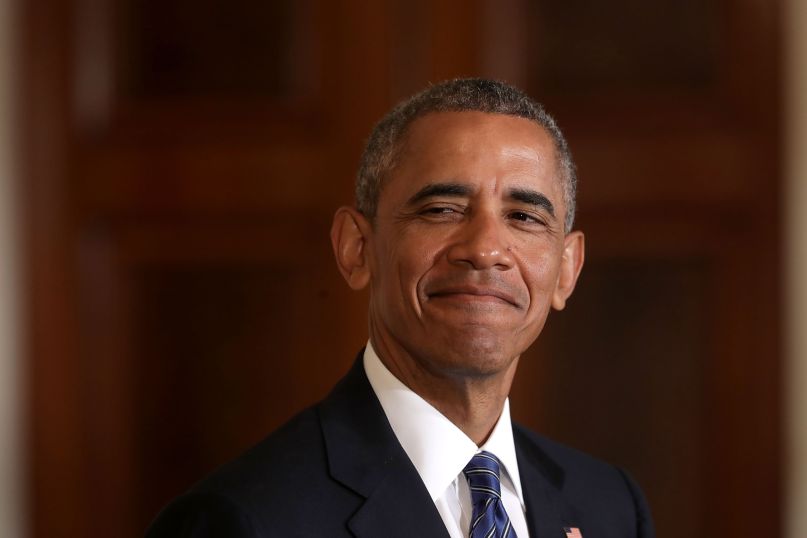 This editorial was originally published in June 2016 and is being rerun ahead of President Obama’s Farewell Address.

Jampaign is a monthly column in which Mandy Freebairn explores where music and politics collide in unique ways. This month, she looks back upon the growing politicization of African American music during Obama’s presidency.

On May 31st, 2016, President Obama declared June 2016 African American Music Appreciation Month. It’s a gesture he’s made each year since his 2008 inauguration and a continuation of a precedent set by Jimmy Carter in 1979. The past month has given us a chance not only to honor the outstanding musical achievements of African Americans over this year, but also to look back on President Obama’s entire presidency. As he prepares to leave office at the end of the year, it’s worth reflecting on how this month mirrors the larger themes of his time in Washington.

In a way, the fusion of African American music with politics represents a dichotomy that has punctuated Obama’s presidency. On one hand, Obama’s two terms have seen shining examples of excellence in African American music. Kendrick Lamar skyrocketed to fame with good kid, m.A.A.d city in 2012, then reached an even higher peak with last year’s To Pimp a Butterfly. Jazz saxophonist Kamasi Washington, who contributed to that album, also found commercial success with last year’s The Epic. Not to be outdone, Beyoncé has put out four bestselling albums in the last eight years, most recently the stunning visual album Lemonade. Chance the Rapper’s Coloring Book had such massive success that the Grammy Awards were forced to alter their eligibility guidelines so the album could be considered. And this is to say nothing of Yeezus.

On the other side, however, is a less uplifting truth. In his time in office, President Obama has also bore witness to plenty of turmoil in the African American community. Trayvon Martin. Eric Garner. Michael Brown. Tamir Rice. Freddie Gray. Sandra Bland. Not to mention over 1,000 others in 2015 alone. These deaths led to protests in Ferguson and Baltimore. They sparked the birth of the Black Lives Matter movement. They reignited a national conversation about police brutality and racial profiling, which shed light on some alarming statistics regarding the mass incarceration of African Americans in the US. Most importantly, these killings reminded us that there is work to be done.

These are two coexisting realities that cannot be ignored as Obama’s presidency draws to a close — massive artistic achievement in the midst of massive suffering. It would be a mistake to assume that these narratives are mutually exclusive. On the contrary, the relationship between African American music and the African American political experience as of late is an extremely complicated and interconnected one.

The connection is more obvious in some cases than others. Kendrick Lamar’s music, for example, is overtly political. On To Pimp a Butterfly, Lamar explores the experience of institutionalized racism and poverty, calling for self-love and empowerment in the face of these pressures. The President himself cites “How Much a Dollar Cost?” as his favorite song of last year and even went so far as to invite Lamar to the White House this past January to discuss youth mentorship in the inner cities.

Lamar is far from the only artist to address these concerns. In addition to exploring a romantic relationship, Beyoncé’s Lemonade references police brutality and the double marginalization of black women in the United States. On Kanye West’s “Feedback”, off this year’s The Life of Pablo, he raps, “Hands up, we just doing what the cops taught us/ Hands up, hands up, then the cops shot us.” These statements are a powerful outcry against the current state of affairs. And with outcry comes backlash, as witnessed by the police boycott of Beyoncé’s Super Bowl performance, among other things.

African American music need not be overtly political to have a political connection. Both Chance the Rapper and Kanye West’s incorporation of gospel elements into their music reinforce the connection to the African American community. Kamasi Washington regularly performs in a Dashiki and is vocal about the influence of his African American heritage on his music.

Whether it involves speaking directly to the President about the issues or simply reflecting on one’s experience as a part of a community, it seems that African American artists have in some ways done what we expect of our political leaders. They represent a marginalized group in the public political discourse by both making the public aware of the issues and promoting greater unity within the African American community.

President Obama recognizes this importance. Throughout his time in office, he has hosted jazz concerts at the white house, attended South by Southwest this year, and even provided an official White House stance on Kendrick vs. Drake. As he prepares to leave office, however, it would be hard to find concrete evidence that conditions have improved for the African American community during his presidency. In fact, it might be easier to find evidence to the contrary.

This is not to say that the President has failed. As noted here, he has done arguably the most of any of his predecessors to acknowledge the accomplishments of African Americans, and his consistent observance of African American Music Appreciation Month is an example of that. But to acknowledge achievement is simply not enough — not when other members of the same community are being killed at an alarming rate. The duty lies with our elected representatives, yet these people have been reluctant to even acknowledge the issue, much less take steps toward change.

It is not the responsibility of musicians to be political, but our proclivity to flock to the opinions of celebrities coupled with the relative inaction of our politicians has made music and other cultural institutions increasingly relevant to the national conversation. As a nonblack person, I can’t identify with the African American experience, but the connection between African American music and African American politics is universally clear.

No matter the impact, we can’t deny that today’s art is reflecting a truth that our politicians have not caught up to. For proof, just look at last weekend’s BET awards. Our political system seems to be all too willing to believe that we live in a post-racial world, to brush police brutality and racial profiling under the rug, and to point to those same successful musicians as evidence that race no longer inhibits success. The candidates we’ve chosen for November’s election are a product of this. Indeed, the choice seems to be between a candidate who will do absolutely nothing for minorities and a candidate who will do exactly what we have been doing for minorities (which isn’t much). Under Obama, African American music flourished. Going forward, perhaps our politics should follow suit.