Julie Byrne – Not Even Happiness

The artist shines as she makes peace with her restlessness 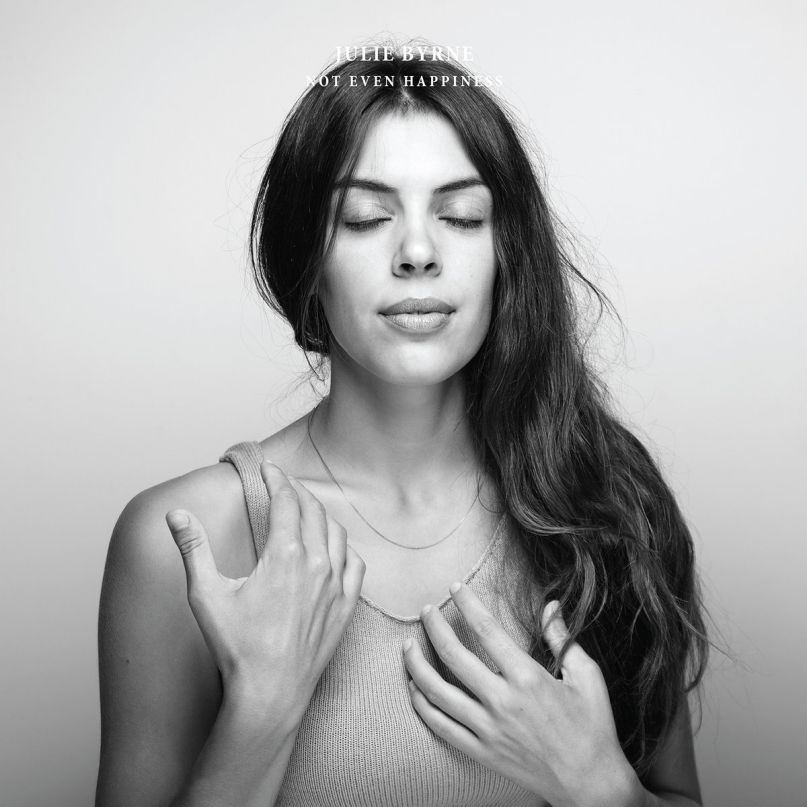 Julie Byrne is forever on the move in Not Even Happiness, gently but relentlessly pushing herself forward. “I cross the country, and I carry no key,” she tells us early on, as if to set the record straight and be clear about her intentions in telling this story, and as she places descriptions of unfurling roads and her own desires flush against each other, we see an ever-clearer picture of a woman who is fiercely uncompromising in her attempts to create a meaningful life.

Byrne, who originally hails from Buffalo, New York, is an artist long on origin myths: There’s her father’s guitar, for one thing, the instrument she coaxes melodies from throughout Not Even Happiness, the same one that he can no longer play due to multiple sclerosis. There’s her summer as a seasonal ranger in Central Park, where she bonded with a rescued duck named Suitcase and sought refuge from the chaos of Manhattan. There’s her rootless existence and the way she touches on the natural world in her lyrics, as if briefly placing her hand on something that gives her strength. Of course, the origin myth gains all its power from the quality of the art that was created in the time of transience or adversity. There’s nothing so simplistic or easy here as a man in a cabin with a guitar, but nevertheless, the mastery that Byrne displays on this album is going to take her places that maybe even she hasn’t been before.

It’s obvious that Not Even Happiness, Byrne’s second studio album, is steeped in something old — that’s intentional. She’s got a voice like buttery leather and the sounds that she makes through fingerpicking her guitar sometimes border on the sublime. But nothing about these songs feels tired; there’s an urgency and immediacy to Byrne’s songwriting that manages to both lull and invigorate. “Sleepwalker” is lush and gentle, underpinned by a kind of steel-string fierceness: “I traveled only in service of my dreams,” she sings. “I stood before them all/ I was a sleepwalker.” It’s part lullaby, part personal meditation, part devotional; “I long for you now even when you just leave the room,” she tells a new lover, as if frustrated by the magnitude of her own feelings.

Not Even Happiness is an album that moves from moment to gorgeous moment; like the subtle feeling of change and progress that comes from crossing over state lines even if the scenery doesn’t look any different, Byrne pulls us along with her, from the southwest to Colorado, the Pacific Northwest, and beyond. There’s healing taking place here, too; Byrne never quite names her affliction, but in songs like “Natural Blue”, heavy with strings, melancholy bubbles up. “Walk forward from your open wound,” she advises (a line borrowed from a poet friend of hers), and the generosity of this second-person statement makes it feel like we’re in this with her; we may not have bought the gas or put in the miles, but by virtue of going on this journey with Byrne, we’re able to access the same revelations. That is the magic Byrne weaves, the power she holds.

Album closer “I Live Now as a Singer” sets itself apart from the rest of the whole through sparse synths that lie right below Byrne’s voice and lift it up, rather than weaving in and out as the guitar does. It’s not a conclusion as much as it is an ellipses; it may have taken Byrne several years to write the material on Not Even Happiness, but the album serves as a reminder of just how sweet a slowdown can be in this frenetic world. There’s something to be said for the potential for personal growth inherent in traveling without a destination, and every song here is the sound of Julie Byrne making peace with her restlessness.

Essential Tracks: “Sleepwalker”, “Natural Blue”, and “I Live Now as a Singer”