The annual National Prayer Breakfast was tainted by the onerous POTUS 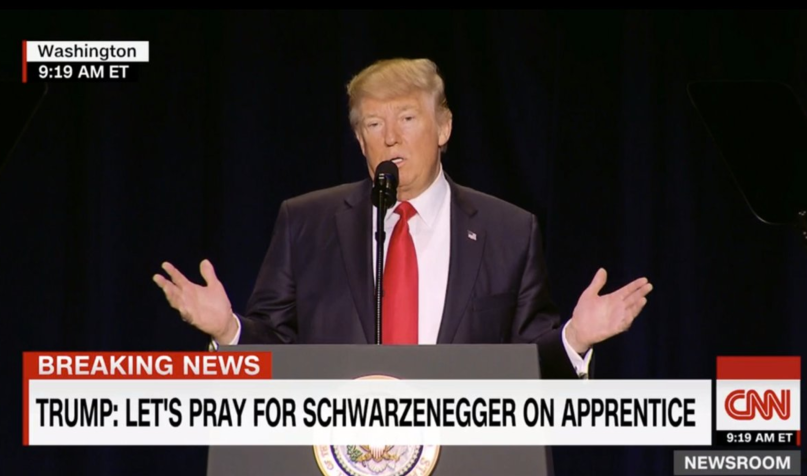 This morning, Donald Trump spoke at the annual National Prayer Breakfast in Washington, DC. Rather than offer up solemn, wise words — as, you know, a president and world leader is usually prone to do — the sentient Cheeto proceeded to mock Arnold Schwarzenegger for his lackluster ratings as host of Celebrity Apprentice.

“We know how that turned out,” Trump told the audience, which included his former Apprentice producer Mark Barnett. “The ratings went right down the tubes. It’s been a total disaster. And Mark will never ever bet against Trump again.” He then added, “And I want to just pray for Arnold if we can, for those ratings.” Watch the clip below.

This is hardly the first time Trump’s weighed in on reality TV (instead of more pressing matters like the situation in Ukraine). In early January, he tweeted out: “Wow, the ratings are in and Arnold Schwarzenegger got ‘swamped’ (or destroyed) by comparison to the ratings machine, DJT.” Indeed, he referred to himself in the third person and as DJT.

In response, Schwarzenegger himself took to Twitter this morning and offered to trade jobs with Trump. *Fingers crossed*

Between losing allies in Australia, Mexico, Germany, and probably soon the UK, and his very own party seriously questioning his nominees, well… if anyone needs a prayer, it would be him — though I’m not sure evil incarnate is even susceptible to such things. Umm, at least he can draw?