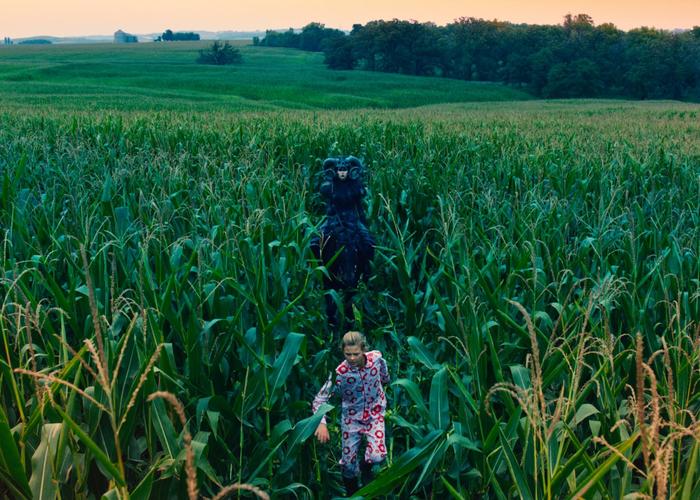 The following review was originally published as part of our coverage of the 2016 South by Southwest Film Festival.

Have you heard the one about the farm girl who took on Reagan? It’s called American Fable, writer and director Anne Hamilton’s fantastical thriller that sprinkles some dark magic on the Midwest’s terrifying farming crisis of the 1980s. At the time, veteran farmers across America suffered the worst economic conditions since the Great Depression, ranging from droughts to soaring interest rates, derailing property values to unfathomable foreclosures. Many lost their land, or were forced off it, and this is the fragile setting that Hamilton captures with a degree of magnificent surrealism and touch of Americana so rustic, you would swear it was ripped straight out of your pappy’s photo album.

Set in 1982, we see this tumultuous era through the eyes of an imaginative 11-year-old named Gitty (Peyton Kennedy), who’s caught between a rock and a hard place. Her family’s farm is on the cusp of impending doom, a sobering reality that her father Abe (Kip Pardue) and brother Martin (Gavin MacIntosh) attempt to solve by kidnapping a wealthy man (Richard Schiff) for ransom. Such realities are initially lost on Gitty, who’s been forever enchanted by fairy tales, riddles, and bedtime stories, but slowly she starts piecing together the clues after she encounters the man stowed away in a nearby silo. This tasks her in deciding whether she should save a man’s life or protect the interests of her own family.

With the exception of a few lone scenes, Hamilton stays close to Gitty, and it’s her spiritual journey that makes American Fable so fascinating. We see how beautiful the world can be to a young precocious child, whether it’s catching a chicken or setting off fireflies at dusk or looking for books at the library. We’re also fortunate that she’s such a creative, ambitious, and resourceful child, one who’s willing to climb atop rusty silos or jump into wells without pause. That sense of adventure, in turn, elevates the story and allows for some intriguing plotting that warrants the larger-than-life sequences that Hamilton crafts and paints. Which is key since the film tends to plunge into the surreal at any given moment.

Yet the visual metaphors are found aplenty in Hamilton’s film. The young director, whose resume includes a year-long internship working on Terrence Malick’s The Tree of Life, not only has much to say, but so many ways to say it. There are the recurring unearthly elements, which mostly represent the darkness descending upon the farm, but the real ingenuity is found in how Hamilton takes the bitter mundanities of life and make strawberry lemonade out of limes. Early on, whenever Gitty’s fantasies take a backseat to the reality at hand, she’s either peering through half-open doors or the slats in a banister, underlining how distant she is from everything going on.

Hamilton capitalizes on these intimate moments with patience and reverence, using these portraits to also elaborate on the characters. In one scene, she watches her father crumble to pieces following a damning call from the bank, and the fear in her eyes is heartbreaking. It’s unreal how the young Kennedy ably carries this film, challenging each supporting character with her own coming-of-age curiosity. She can go toe-to-toe with a veteran star like Schiff (who’s also fantastic in this) or sell the image of a lived-in family as she does whenever she’s near her on-screen father (Pardue) or mother (Marci Miller). The latter shares a particularly poignant scene with Kennedy involving popsicles that oozes with chemistry.

Where American Fable suffers, however, is in its inability to contain its own mysticism. Once Zuleikha Robinson’s eerie Vera appears, it’s as if she arrived with a Richard Kelly script in tow, pretzeling the narrative with way too many metaphors that all start colliding into each other for attention by the end. This explains why a half-baked pregnancy subplot is clumsily wrapped up, or why Martin’s homicidal tendencies eventually turn asinine. Again, Hamilton wants to do too much, and how she’s able to nail so much of it speaks to her already-dynamite abilities as a director. (No lie, you could pause on any given scene, print it out, and hang it on a wall — the shot selections are that enviable.) So while American Fable isn’t without its share of flaws, it’s the type of inventive production that hints of happier endings to come.