For John Oliver and Last Week Tonight, the Trump Era Is a Chance to Get It Right

In its fourth season, Oliver's HBO show will confront the new meaning of "fake news" 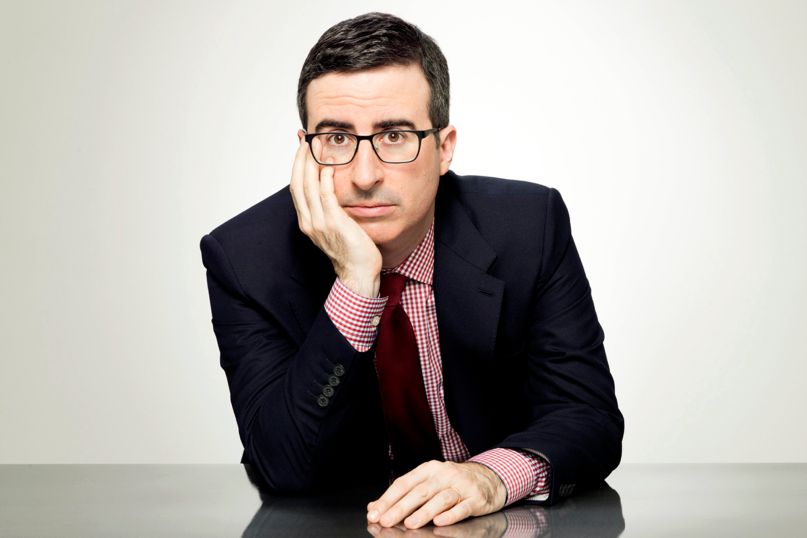 John Oliver ended 2016 with a bang. Literally. On the season finale of his HBO late-night series, Last Week Tonight, the British comic stood in the center of New Jersey’s Red Bull Arena and blew up four massive numerals symbolizing a year that had been, in his candid estimation, “the fucking worst.” It was a moment of catharsis for Oliver’s loyal and almost exclusively left-leaning viewers, many of them still struggling to come to terms with what had happened just a few days earlier, when Donald J. Trump won the electoral college to become the next US president.

Oliver’s explosive antics brought some levity to an otherwise downbeat and sobering episode, in which he called out the media for its part in Trump’s victory and even cited his own show’s tendency to burrow inside a partisan bubble. “People can choose to get their news from echo chambers that validate their views,” he warned earlier in the broadcast. “And there is nothing inherently wrong with media that has a viewpoint. This show has a viewpoint … But a healthy media diet has to be broader than that.”

Of course, Oliver’s segment about biased and “fake” news plays much differently now than it did when his show last aired in November. Back then, the term “fake news” was reserved more or less exclusively for sites like Addicting Info and Freedom Daily, which traffic in demonstrably false stories engineered to drive clicks by reaffirming a particular set of partisan beliefs.

But the facts have quite literally changed in Oliver’s short time off, and “fake news” has itself become a misleading term. The irony of this is apparently lost on President Trump, who has gleefully co-opted the term as a means of discrediting any news story he personally disagrees with. Earlier this week he tweeted out the most egregious example yet, in which he summarily dismissed any “negative polls” about his approval rating as false:

Oftentimes, the stories that draw Trump’s ire come from reputable outlets like the New York Times and the Washington Post. Here he is calling out the Times directly, mischaracterizing the paper’s inaccurate election forecasts as “fake news”:

The failing @nytimes has been wrong about me from the very beginning. Said I would lose the primaries, then the general election. FAKE NEWS!

Those quick to characterize Trump as a bumbling, incompetent fool should step back and acknowledge the genius of this tactic. By changing the conversation about what constitutes fake news, Trump has obscured the difference between the cesspool of stories circulating online and the kind of well-researched, meticulous journalism that a democratic society needs to thrive. If the public gets in the habit of treating a verifiable White House leak with the same credibility as Pizzagate, we’re going to have a serious problem over the next four years.

Part of solving that problem is figuring out where comedic journalism fits within the new media landscape. Several of Oliver’s prominent peers have already begun carving out their own niche, albeit with varying levels of success.

The Daily Show’s Trevor Noah has emerged as the disarmingly civil voice of reason, willing to engage conservative firebrands on hot-button issues, as he demonstrated in a recent debate with talk show host Tomi Lahren. And yet, despite his best intentions, Noah has struggled to retain viewers who miss the sharper bite of former host Jon Stewart’s political satire.

Meanwhile, Full Frontal’s Samantha Bee and Real Time’s Bill Maher have dug deeper into their partisan trenches, taking on Trump with a mixture of rage, mockery, and outright scorn that plays well on TV but isn’t likely to win over many converts. Maher also recently hosted Lahren on his show, but the discussion quickly devolved into a shouting match, with both host and guest talking past each other and into their own echo chambers. This is not an unsuccessful formula as far as ratings are concerned, and both Bee and Maher deserve credit for tapping into liberal anger so effectively.

Oliver, however, is cut from a different cloth. He’s less interested in debating the most talked-about issues of the day than in shedding a light on more obscure corners of the political universe. And while he admits to his own viewpoint, he has consistently favored fact-based, investigative journalism that cannot be easily dismissed by the other side. More so than any other example of comedic journalism, his program has come to resemble a traditional news program in its weekly presentation of meticulously researched stories that resemble what journalism and “real news” have looked like in the past.

Oliver’s total lack of concern for ratings (“I don’t really think about reaching people. Maybe that’s stupid, but it’s the luxury of working at HBO,” he claimed at a recent breakfast with journalists) has allowed him to indulge his journalistic whims and, by doing so, attract an almost cult-like online following. His exposés of topics ranging from public stadium funding to net neutrality have become the stuff of YouTube legend despite their focus on issues outside the mainstream news cycle. Rather than stoke rage by reaffirming and amplifying his viewers’ biases, he’s gone out of his way to present them with new issues to consider.

When the fourth season of Last Week Tonight premieres on Sunday, Oliver will likely embark on a different kind of mission — one that lives up to last season’s sign-off of “Let’s all try harder next year.” It was easier for Oliver to focus his attention on issues outside the mainstream in his first three seasons, which coincided with an Obama presidency in which the world didn’t always feel on the verge of armageddon. This time around, he will be contending with a new reality in which the most elemental aspect of journalism — the fact — is under daily attack from the most powerful man in the free world.

It may seem like an obvious move for Oliver to shift his satirical and journalistic gaze toward Trump, but it goes against his natural inclination to steer clear of topics that have already been talked about to death. Unlike 24-hour news networks like CNN, which greedily lapped up Trump coverage in the early going, Oliver mostly ignored the man until he had already established a commanding lead in the Republican primary. He finally addressed the issue of Trump head-on in a February 2016 segment that systematically and brilliantly eviscerated his candidacy, calling attention to his failed business record, his tendency to not follow through after threatening lawsuits, and even the fact that his historical surname is Drumpf. In one of his classic calls-to-action, Oliver then challenged America to #MakeDonaldDrumpfAgain.

Though it ultimately didn’t achieve its goal, that segment, along with last season’s finale, represents the potential of Last Week Tonight going forward. It will be difficult for Oliver to tackle topics like the tobacco industry and televangelists without first addressing the orange-hued elephant in the room, but the challenge also presents him with an opportunity to lend a uniquely thoughtful, considered, and fact-checked take to a media world that has struggled to cover the Trump administration thus far.

The comedic element of Last Week Tonight is also crucial, as Trump has demonstrated time and time again that he pays attention to well-placed mockery. One of the strangest stories in yet another strange week for the White House came on Monday, when Politico reported that the famously thin-skinned commander-in-chief was upset about Melissa McCarthy’s portrayal of Sean Spicer on Saturday Night Live. While McCarthy’s performance was indeed spot-on, the real revelation here is that comedy has the president’s ear and thus holds the potential to shape the political discussion in an unprecedented way.

All of this is happening, of course, at a time when the very idea of news is transforming in ways that are both terrifying and a little fascinating. Jon Stewart’s nightly attacks on the Bush administration via The Daily Show were somewhat blunted by the fact that his program wasn’t taken seriously as news; a decade later, that’s less of a problem for Oliver. Not only has Last Week Tonight proven its journalistic bona fides with a series of admirably researched and surprisingly in-depth reports, but satirical news in general has become a more serious form of political expression.

The fact that it doesn’t take itself too seriously also plays to its advantage. Trump can rally his supporters by calling out CNN and the New York Times as “fake news,” but he would sound a lot sillier saying the same thing about a program that’s intentionally comedic in nature. Last Week Tonight therefore has the potential — should Oliver be willing to capitalize on it — to become the most relevant and resistant news program on television in the Trump era.

Oliver, of course, has the right to make his show about whatever he wants, and it will continue to enlighten and entertain even if he opts to keep digging up obscure stories on a weekly basis. But for Last Week Tonight to truly become a cultural force on par and even surpassing The Daily Show in its heyday, he’ll have to buckle up for a full season of relentless (and relentlessly fact-checked) Trump evisceration.

If he keeps his sharp wit pointed directly at Trump’s jugular, he may just change how we look at comedic journalism — and journalism in general — in a way that reverberates far beyond this sham of a presidency.