These days, Dylan Baldi and his Ohio rockers are more than just a "Modern Act" 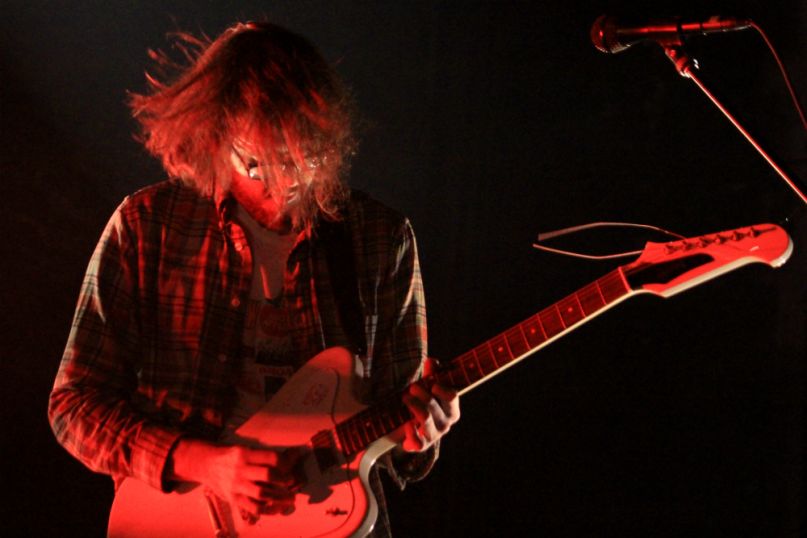 Things fucking suck. As Führer Trump continues to Make America Grating Again, the world around him remains shocked, stunted, and angry. But it’s a different brand of anger, a rage that comes from within and has no real place to go. Instead, it sits and stews like some mutating form of chaos, exhausting one’s mind for a proper (and rational) release. Music often factors into that escape, providing a source of respite that’s spiritually enlightening while also being physically therapeutic, and there was plenty of it during Cloud Nothings’ sold-out set on Friday night at Chicago’s Thalia Hall.

“I believe in something bigger,” Dylan Baldi screamed into the mic during set closer “Realize My Fate”. “But what I can’t articulate/ I find it hard to realize my fate.” It was a dour song that ended an otherwise lively night, but it was a fitting final note for our equally dour times. After all, Baldi’s feelings are rather palpable right now, as we’re also figuring out what we can do during this unprecedented era. So, as drummer Jayson Gerycz tiredly pushed off his kit and Baldi said farewell between gasps of air, so did we shuffle on back into the cold reality that shows zero signs of being warm anytime soon.

Yet, if you recall, “Realize My Fate” also closes out the band’s latest album, Life Without Sound, which sports a number of surprisingly optimistic songs for a band that previously penned ultimate bummer jam, “No Future/No Past”. Speak of the devil, that Attack on Memory opener bookended the setlist by cracking open a night that, similar to the Ohio rockers’ new album, was stuffed with one rousing anthem after another. Old favorites like “I’m Not Part of Me” and “Psychic Trauma” scorched as many Chucks as newer hits like “Sight Unseen” and “Darkened Rings” buttered as many souls.

With a fourth member in tow — ahem, lead guitarist Chris Brown — Cloud Nothings have never sounded this assured and empowered. Baldi and bassist TJ Duke appear at ease, meaning they’re more in tune with whatever they’re doing at any given moment as opposed to the anxious multi-tasking of years past. Whatever the case, it’s working: Baldi’s pained solos behind new single “Enter Entirely” bled with affecting desperation, while Gerycz’s enduring drum solos on torrential go-to epic “Wasted Days” sounded like a Lynchian remake of Damien Chazelle’s Whiplash.

To be fair, they’ve always been superior live, only now they have a stronger core and a wider margin of songs. But step aside for a moment and you’ll see that Cloud Nothings are growing up right before our eyes. They’re no longer a young modern act but an established outfit that’s not only robust but incredibly reliable. At this point, nobody doubts Baldi’s abilities as a songwriter, just as they don’t doubt the band’s carnal instincts at providing breathtaking moments on the stage. That’s a great position for any rock band to be in today, and an even better one to watch as longtime fans.

That’s why it sucks when the night’s all over.