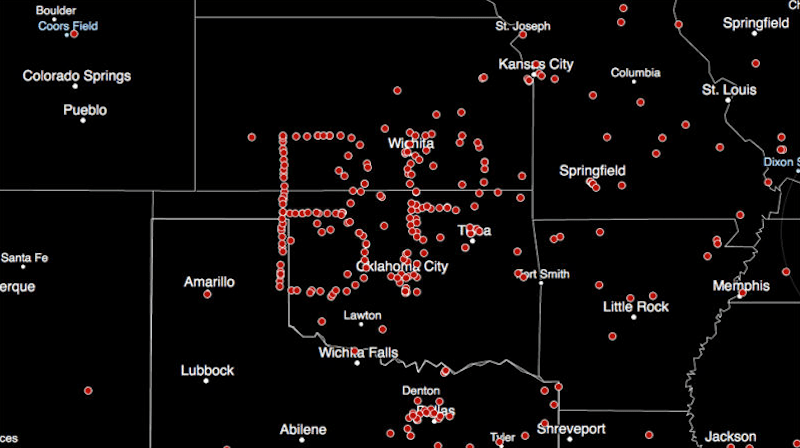 Hundreds of professional storm chasers and enthusiasts joined together on Sunday to pay tribute to the late Bill Paxton in the most appropriate way imaginable. By synchronizing their GPS coordinates, they wrote out the legendary Twister actor’s initials on their maps right where the 1996 blockbuster took place.

Twister saw Paxton’s character and a team of storm chasers running down tornados as they tore through Oklahoma. When the real-life scientific adventures plotted out their tribute, they centered it around the city of Wakita, Oklahoma, where the film’s Aunt Meg (Lois Smith) lived. It’s also the location of the official Twister Museum, which houses the original Dorothy I prop.

Paxton passed away on Saturday due to complications from heart surgery. In addition to his Twister role, he was known for parts in Aliens, Apollo 13, Titanic. Let’s see what the astronauts and deep sea explores do to top the chasers’ ode. Check out images of the GPS tribute taking shape below.

Folks are getting their dots into position pic.twitter.com/vnq9rZNKY9

It just keeps getting better! Hundreds of storm chasers honoring Bill Paxton in KS and OK. Each dot is one person's GPS. #RIPBillPaxton pic.twitter.com/z14XQ9msPR