The Beatles, American Bandstand, and the Invention of the Reinvention

Fifty years later, celebrating a band that killed itself to live 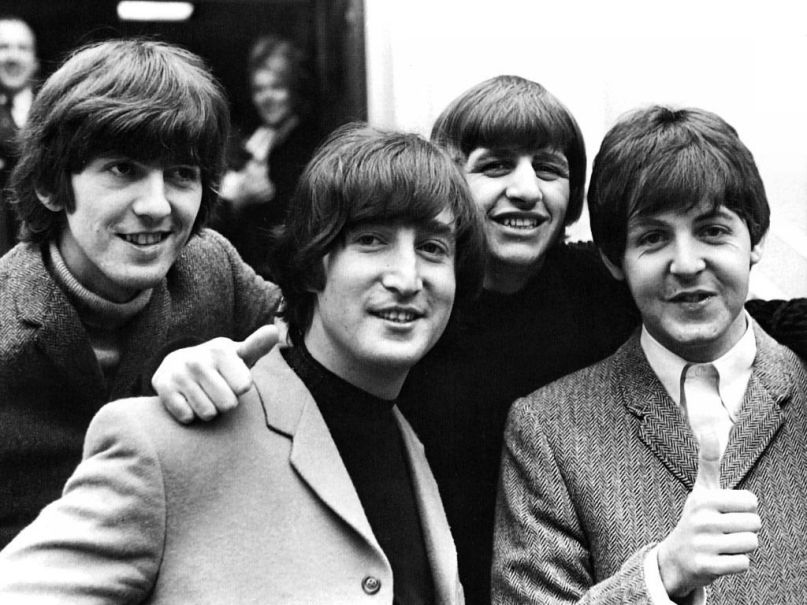 Ladies and gentlemen, The Beatles! Seventy-three million American television viewers listened with varying degrees of hysteria as Ed Sullivan bellowed those words in February 1964, not quite aware that he was introducing a new era in music history rather than the latest rock ‘n’ roll fad to hit American shores. The Beatles in 1964 were a contradiction if ever there was one. How could four skinny, mop-topped blokes from a backwater city in Northern England take an entire foreign continent by storm? How could four musicians who looked so shaggy by the standards of the time also appear so dapper — so meticulously groomed — in their matching suits and ties, so charmingly authentic and yet so transparently engineered?

Whatever critics thought of The Fab Four and their intentions, the group’s appearance on The Ed Sullivan Show sparked a run of success that has never been duplicated in pop music history. So-called Beatlemania would go on to last for nearly three years, during which time the band at the center of the storm released five hit records and became, in John Lennon’s famous estimation, “more popular than Jesus.” Few of those lucky fans who scored tickets to a live Beatles concert between 1964 and 1966 actually heard the band play live, as high-pitched screams and hysterical shouts drowned out any sound their feeble amps could muster.

And then, just as The Beatles were reaching the zenith of their cultural power, something equally phenomenal happened: They pulled back. On August 29, 1966, in front of a crowd of 25,000 at San Francisco’s Candlestick Park, they performed their final live concert and retired from the public eye, jaded by nearly three years of nonstop attention and adulation. They nearly broke up but instead retreated to the comfort of the studio, where they could focus on making the music they wanted to make. With fame having long lost its allure, they seemed to be staring down a win-win proposition: Make a record that everybody hates and bury Beatlemania for good or make a record that reinvents them as a “studio” band and allows for an unprecedented amount of creative freedom moving forward.

History will say the latter came to fruition, but the former seemed more likely when The Beatles resurfaced in February 1967 with two new songs and an entirely new aura about them. The venue for their reemergence was none other than American Bandstand, Dick Clark’s long-running music-performance show on which teenagers danced around to Top 40 hits and offered their opinions on the newest singles of the day. Clark, who had come around to the band only after Beatlemania caught on in earnest, was offered the chance to preview the promotional films for “Strawberry Fields Forever” and “Penny Lane”.

Having seen the films himself, he knew they would cause a stir among his relatively conservative young audience members, many of whom still fondly associated the group with their Beatlemania phase. “You’ll notice a definite change between then and now,” he warned in a segment that aired a week prior to their appearance on American Bandstand, and he was right.

It was difficult to fathom, even then, just how far The Beatles had come in the three years since they landed on the tarmac at JFK and took America by storm. They had gradually transformed from a charming and attractive British boy band into artists that demanded to be taken seriously with sonically explorative songs like Rubber Soul’s “Norwegian Wood (This Bird Has Flown)” and Revolver’s “Tomorrow Never Knows”. The dapper and telegenic Clark suspected that young fans would still hold faith in The Beatles so long as they looked the same, but he also knew that he was about to introduce those same fans to a virtually unrecognizable new version of the band.

The “reinvented” Beatles, as they appeared on screen, had replaced their mop tops with mustaches and their skinny black ties with a garishly colorful ensemble that anticipated the anything-goes fashion of the Summer of Love. They also seemed intent on proving that they were no longer boys but men, hardened by years of touring and drug use and flamboyantly unconcerned about what screaming teenage girls might think of them. The Beatles would once again return to a uniformed look on the cover of Sgt. Pepper’s Lonely Hearts Club Band (released later that year, in June), but their day-glo-colored military uniforms could almost be read as a bitter, sarcastic reaction to the sameness that had helped catapult them to prominence in the first place.

American Bandstand’s audience, rather predictably, hated the new look and didn’t much care for the new music, either. The same women who might have swooned over “I Want to Hold Your Hand” scrunched their noses at “Strawberry Fields”, as Clark confirmed when he sat with the audience to gather their impressions. “I don’t like The Beatles,” said one young woman, who sounded like she was trying to convince herself more than anyone. “I think they went out with the Twist,” said a young man damningly, referring to the recently out-of-vogue dance. They’re ugly!” said another woman.

Ugly or not, The Beatles had the last laugh and ended up making those teenagers look shortsighted and foolish (in other words, like teenagers). The two-sided single of “Strawberry Fields” and “Penny Lane” marked a phenomenal reinvention for the band that would reach its peak with Sgt. Pepper, an album that many consider to be not only their most accomplished but perhaps the greatest pop record of all time, period. The Beatles are obviously extremely influential in just about every way a rock band can be, but those in search of their greatest feat need not look further than their fateful appearance on American Bandstand 50 years ago.

In essence, The Beatles invented the reinvention, paving the way for generations of pop and rock artists who would use their blueprint and try — with varying degrees of success — to accomplish a similar leap forward and to the side. The first after them was perhaps fellow Brits The Moody Blues, whose sophomore album Days of Future Passed (recorded in October and released in November of 1967, perhaps not coincidentally) recast them as leaders of the burgeoning progressive rock movement. More contemporary examples in the pop field include good-girls-gone-bad Katy Perry and Miley Cyrus, the latter of whom (also perhaps not coincidentally) collaborated on The Flaming Lips’ 2014 Sgt. Pepper covers album.

There is much and more to say about how The Beatles permanently altered the trajectory of rock ‘n’ roll, and a lot of it will probably be repeated ad nauseam when Sgt. Pepper turns 50 this summer. But for now, let’s take a moment to appreciate the band that made the reinvention not only possible, but commercially viable and critically acclaimed. And let’s also appreciate the irony of a band that retreated from the spotlight, deliberately made themselves “weird,” and somehow expanded their choke hold on rock history by doing so. More popular than Jesus, indeed.