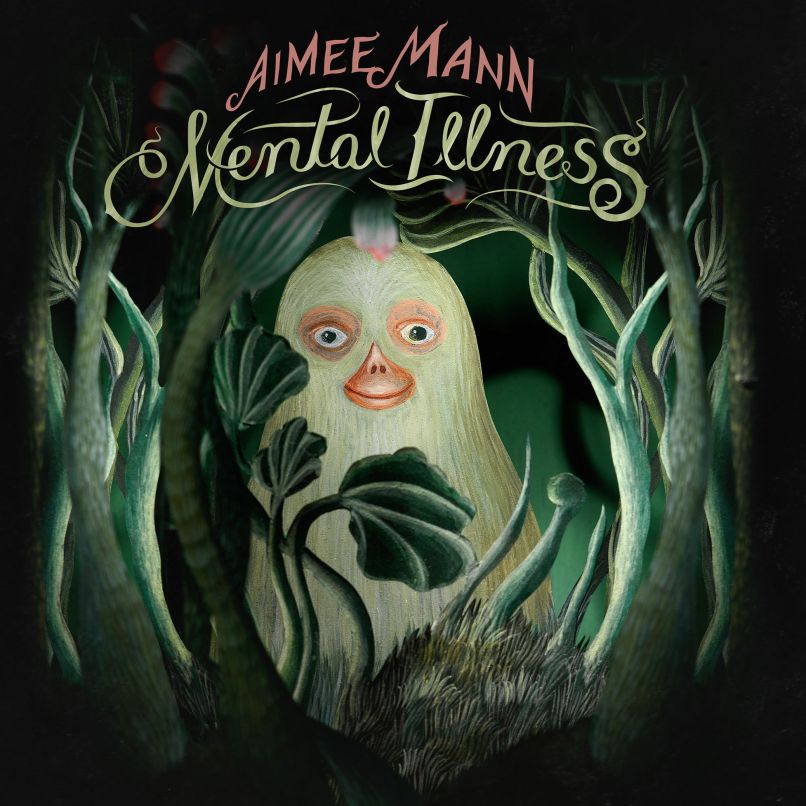 The title of Aimee Mann’s latest solo effort, her ninth, registers like a punch to the gut. In a world full of self-consciously clever and willfully obtuse album titles, Mental Illness is the equivalent of washing someone’s mouth out with soap. It’s not something you mull over or analyze in search of some hidden subtext or meaning. Instead, it smacks of cold reality.

In an interview with Rolling Stone in January, Mann called Mental Illness the  “saddest, slowest” record of her 35-plus-year career. She’s not kidding. Her latest collection finds her singing love-spurned tales of heartache, anger, and remorse, giving the emotionally loaded title some added weight. But that doesn’t mean that Mann isn’t putting us on, at least a little bit. “I mean, calling it Mental Illness makes me laugh, because it is true,” she said. “But it’s so blunt that it’s funny.”

In the interview, Mann cops to playing into the sad, depressed persona she believes that so many fans view her as. It’s a perception that was first baked into the public’s consciousness back in 2000, when “Save Me”, still one of Mann’s most well-known songs, earned her an Academy Award nomination for its inclusion in Paul Thomas Anderson’s Magnolia. Since then, Mann has been pegged as a songwriter with a penchant for bottling up melancholic beauty. It’s a niche she can satisfy with ease, but the designation hardly does justice to how relatively versatile her music has been over the course of her career.

(See: A Conversation with Aimee Mann)

Knowing that, it’s not surprising that Mann would choose to playfully lash out at people’s narrow perceptions of her work. But while she might be having fun with us, she’s nonetheless created a remarkable character sketch on Mental Illness. For 44 minutes, Mann slips into the skin of someone walking an emotional tightrope, and it’s an act she pulls of with grace and conviction. Mann’s music has never lacked for warmth or heart, but her latest songs are the kind of delicate bruisers that feel like they might fall apart in your hands if you sneeze. The solid, crunchy pop rock that defined 2012’s Charmer is nowhere to be found this time out, its punchiness replaced instead with acoustic guitar, sobering strings, sparse percussion, and Mann’s soothing-yet-stately voice. She might be playing to perceived type, but the subtler arrangements color the somber picture she’s painting perfectly.

The table is appropriately set on “Goose Snow Cone”, a feather-light folk pop number reminiscent of something Joni Mitchell might have concocted in the early ’70s. Bells, chimes, strings, and light acoustic guitar help Mann tell the story of someone trying to put on a brave face to mask the hurt. “Gotta keep it together when your friends come by,” she sings. The rest of the record’s 11 tracks follow the song’s wounded lead. There are waltzy ballads (“Stuck in the Past”, “You Never Loved Me”) and shattering rebukes directed at past loves (“Patient Zero”, featuring backing vocals from Mann’s Both co-conspirator, Ted Leo). There are tales of fatalist barroom drunks (“Philly Sinks”) and sorrowful, self-reflective piano ballads (“Good or Me”). On the few occasions when Mann moves the record into guitar-bass-drum territory, tracks like “Lies of Summer” still shoulder an emotional burden. “Who gets hurt the most?” she sings. “The guys that you would call a brother/ Girls that loved a ghost/ A ghost that had a sick mother.”

Mental Illness lays its hurt and sadness out so effectively that it’s hard to completely accept it as pure fiction. But even if we’re to take Mann’s word for it that these songs were created with some personal distance, it’s still no less powerful of a record. It shows not only her strengths as a songwriter, but also as a storyteller. Mann’s proven that she doesn’t need to be lovesick or embittered in order to play such a person on record. That, in the end, might be the most identifiable mark of a true artist.

Essential Tracks: “Goose Snow Cone”, “You Never Loved Me”, and “Lies of Summer”