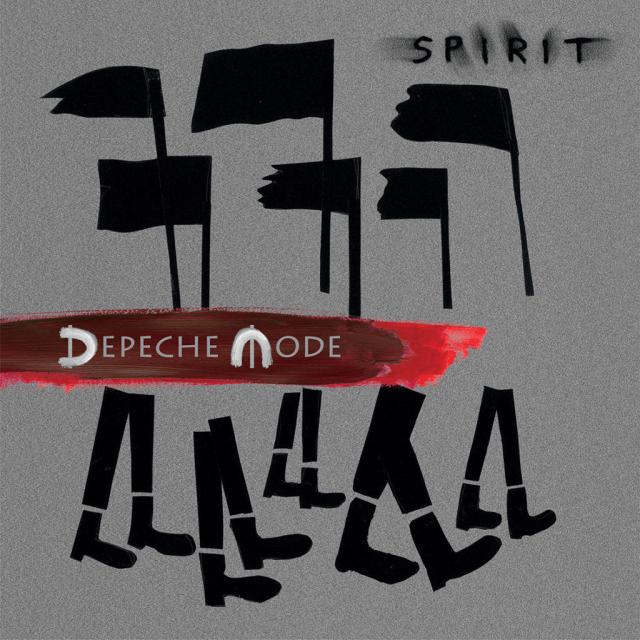 Depeche Mode occupies a unique place among the constellation of synthpop acts that emerged from the UK post-punk scene around three decades ago. Since the release of Songs of Faith & Devotion in 1993, they’ve been entirely disinterested in the “pop” half of that portmanteau, creating instead a gloomy yet sensual swamp that sprouts elements of rock, blues, and the proto-industrial acts that influenced them.

It’s an admirable path to travel, as a lesser band at this point in their careers would just as easily try the regressive move and attempt to replicate the sound of their past successes. Instead, Dave Gahan, Martin Gore, and Andy Fletcher have made moves to maintain their sonic evolution with the production assistance of Simian Mobile Disco member James Ford.

In that sense alone, Spirit, the band’s 14th studio album is a success. With Ford’s help, they’ve amassed a collection of songs that throb and flex, pitches to the rhythm of slowly gyrating hips and liquid late-night trysts. However, the poisonous regret that they’ve injected into the mix is a hard-line political stance that has all the subtlety of being beaten about the head by a protest sign.

(See: Depeche Mode Explain How to Save the World)

This is perhaps a logical reaction to the mood of the modern era, where voters in their native England spouted ignorance while pulling their country from the E.U., and various right-wing political parties and candidates started to infect the governments of Germany, Greece, and beyond. But Depeche Mode aren’t really the band to comment on such situations. It was principal songwriter Gore who came up with the insanely catchy but groaningly simplistic anti-racist anthem “People Are People”, after all.

The politically minded tracks on Spirit have the same hashtag-friendly mentality. Lead single “Where’s the Revolution?” has a appealing, nasty slap to the music but gets stuck on its title, tut-tutting the global community (“C’mon people you’re letting me down”) and then urging us to get on board the train. Elsewhere, on “The Worst Crime”, Gahan goes for some sultry emotion as he opines about “misguided leaders” and “uneducated readers,” charging us all with treason to boot as a plodding trudge slinks beneath him. There’s little need to get into the empty platitudes of “Scum”, other than to applaud Gahan for adding a little punkish bite to his vocals.

The band’s hard swings back into more familiar territory are as welcome as they initially jarring. The middle part of the album puts them on cruise control that ramps up the sexual fervor with lusty sentiments (“You Move”) and then a mekanik rhythm that leads the questioning “Cover Me” on a journey up the Autobahn. And of course Gore gets his spotlight moments, throwing a lot of vibrato in his vocals as he promises to protect a loved one from black clouds and radiation. He isn’t the “Somebody” crooner he once was, but his emotional aim remains true.

As so many people in the creative world reckon with the hard right turn that many world leaders seem to be taking, there are going to be a lot of albums like Spirit. Records that have all the best intentions to rouse what they see as a sleeping populace from their smartphone-induced comas. But the clear concern is that they are all going to be similarly bereft of nuance and wit. Best to appreciate them for what they are: a noble effort that likely won’t have a marked impact on the world at large. As long as it is keeping the members of Depeche Mode feeling creative and engaged, then that is its one great reward.

Exclusive Tracks: “You Move”, “Cover Me”