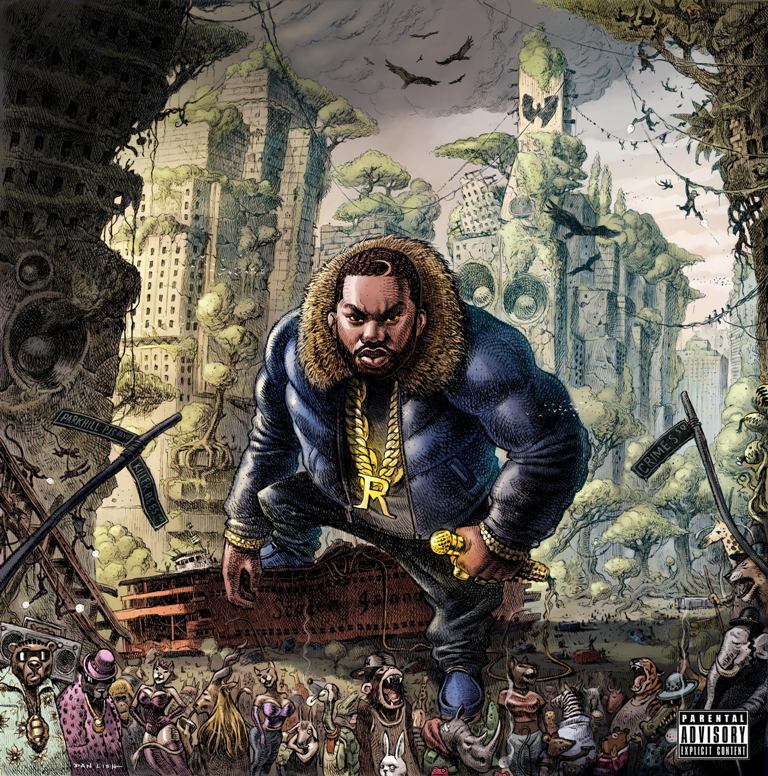 It’s unfair to say Raekwon is back when he’s the only original member of the Wu-Tang Clan who has never really left. Twenty-four years after Enter the Wu-Tang: 36 Chambers dropped, the Staten Island staple of braggadocio street tales is back with his strongest solo effort not titled Only Built 4 Cuban Linx. Raekwon’s last record, 2015’s Fly International Luxurious Art, saw the rapper attempting to appeal to a wider audience with modern production and big-name features, but the album had the opposite of the intended effect. Raekwon had never sounded as dated and out of his element without his usual boom-bap structure. The Wild finds Raekwon’s sound at a nice compromise between his earlier style and the maximalist modern production of F.I.L.A. By scaling back his ambitious reach for a new audience, Raekwon’s second attempt at blending more contemporary beats with his tenacious lyrical flow is drastically more successful than his last record on just about every measurable level.

The largest issue F.I.L.A. had was that its lush and flashy production worked largely in contrast with Raekwon’s gritty street rhymes and ferocious flows. And Raekwon did nothing to adjust his performances to the new arrangements he was striving to prove he could excel over. The Wild’s production is absolutely modern, but many of these beats have a dark edge that pairs much better with the angry flow Raekwon has perfected over the past three decades. “This Is What It Comes Too” immediately recalls classic ’90s Raekwon. The New York MC effortlessly drops vivid, hard-hitting lines like, “Stroke my bullets with cyanide/ So when they touch you that’s a case closed.” Raekwon spits an endearing recount of the life of Marvin Gaye on “Marvin”. The song features a big hook from CeeLo Green, who cuts through this boom-bap track like an outstretched hand pulling the cut into 2017. “Marvin” and “I Have Nothing” both come with the boom-bap foundation that should please Raekwon’s longtime fans.

Raekwon steps outside his comfort zone on tracks like “Can’t You See” and “The Reign”, whose production sounds luxurious and glossy. Rather than coming at these beats with raw aggression, “The Reign” finds Raekwon confidently boasting, “Dining 5 Star restaurants exotic shellfish/ Prominent gifts, kush, cologne, I smell rich.” The gorgeous slow jam “Visiting Hour”, featuring Andra Day, recalls Raekwon’s classic cut “Heaven and Hell” but updates the track with some much needed modern flair. Day offers an exceptional vocal performance over an ethereal piano sample while Raekwon discusses excess and the prison system. It’s a shame the track doesn’t run longer. As a whole, Raekwon’s lyrics reflect the beats he raps over on The Wild much better than F.I.L.A., which gives the entire project more cohesion than its predecessor. The only truly disappointing cut on this record is the beat on “Corners” ft. Lil Wayne, which could have been a hit during the ringtone era but sounds painfully passé in 2017.

While Raekwon’s career was hardly on life support, The Wild is a strong push toward modernity that should attract new fans without alienating those who have been following The Chef since 1993. Raekwon proved he can still spit well over modern production without over-leaning on the boom-bap crutch. The Wild is a worthy addition to Raekwon’s extensive discography and should comfortably take a position near the top of most fans’ lists.

Essential Tracks: “This Is What It Comes Too”, “Marvin” ft. CeeLo Green, and “Visiting Hour” ft. Andra Day