It's nowhere near as influential as the original, but it's got a great fucking personality 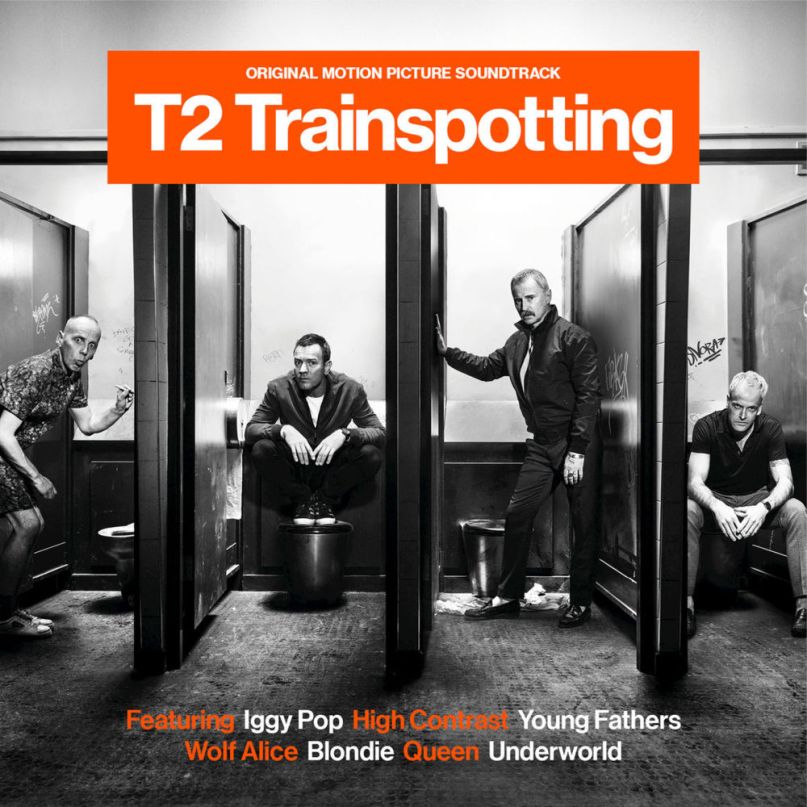 “Personality, I mean that’s what counts, right,” Sick Boy (Jonny Lee Miller) rhetorically asks his fellow Scottish skagboys in Danny Boyle’s 1996 black comedy Trainspotting. “That’s what keeps a relationship going through the years. Like heroin, I mean heroin’s got a great fucking personality.” It’s rough logic, but it’s logic nonetheless, and something that comes to mind while listening to the meticulously designed soundtrack to the film’s highly anticipated sequel, T2 Trainspotting. Because really, personality is all this album needed to have going for it, and rest assured, this album’s fucking heroin.

Most critics would agree that it’s nearly impossible to followup an iconic film, but what so many people often forget is how it’s even more tantalizing trying to followup an iconic soundtrack. While you can sell audiences on the idea of reuniting with their favorite stars on-screen, you can’t recapture a movement, which is what iconic soundtracks tend to do, and it’s much, much harder to create another one. Fortunately for T2 Trainspotting, Boyle wasn’t interested in trying to top the original soundtrack, focusing instead on cultivating a collection of sounds that stayed true to the film’s spirit.

This is something the Oscar-winning filmmaker touched upon in our recent, early morning interview: “As you sort of gather at the foothills of what you’re going to do, people start saying: ‘Soundtrack’s really gonna be good, yeah? I really liked the first one.’ And you go, ‘Fucking hell.’ But you have to forget about all that eventually and aim for what you want regardless of what will be successful, or otherwise it’s the cart before the horse. What we wanted was to have the ability to touch the original soundtrack without feeling slavish, like we were repeating ourselves.” This is exactly what he did.

Whereas the original film’s two-volume soundtrack works like a Beginner’s Guide to English Pop, thanks to choice cuts by Brian Eno, New Order, Primal Scream, Underworld, Blur, Pulp, Elastica, and, bloody hell, even David Bowie, the second film’s soundtrack would be dubbed A Midlife Crisis in High Volume. It’s a hodgepodge of veteran heroes like Blondie (“Dreaming”), Queen (“Radio Ga Ga”), Frankie Goes to Hollywood (“Relax”), The Clash (“(White Man) In Hammersmith Palais”), and Run-DMC (“It’s Like That”) wedged alongside newer gems by Wolf Alice, High Contrast, and Young Fathers.

(Ranking: Every Danny Boyle Film From Worst to Best)

In between those are a couple familiar cuts from the original film, twisted and shaken up for the new millennium. Underworld’s signature theme “Born Slippy” pops some valium and hits the pillow with a remix titled “Slow Slippy”, which scores a number of hard-hitting sequences in the film that’ll hit the jugular, while The Prodigy straps on a diesel engine to Iggy Pop’s punk shlock anthem “Lust For Life” with amicable results. Both selections seemingly underline the film’s running theme that everything has changed, and yet nothing has changed. They’re bursts of nostalgia that surprisingly sound fresh.

Again, personality reigns, because a cursory glance at the album’s tracklist would have you believe this is an absolute clusterfuck — after all, there’s a track by Irish comedy hip-hop duo The Rubberbandits right smack in the middle. Yet such eclecticism happens to be its strong suit, and winds up embellishing the strengths of its younger selections. Young Fathers, in particular, are an outstanding addition. The Edinburgh, Mercury Prize-winning outfit sound like a hipper, edgier version of TV on the Radio, and vibrant songs like “Get Up”, “Only God Knows”, and “Rain and Shine” are total earworms.

(CoSign: Wolf Alice Have a Thousand Sounds and Passion to Spare)

Of course, the tastiest hit off this spoon belongs to London rockers Wolf Alice, whose popular single “Silk” serves as this film’s “Born Slippy”, ably capturing the mood and vibe of the story. Singer Ellie Rowsell’s poppy verses — in particular: “Got to stay cool, you hot, hot head/ Count to a thousand before you sleep in bed/ Read the news, pass the time/ Drink the juice, feeling fine/ “At least you’re not boring”/ No one ever wants to feel this sad, ohh” — sound as if we’re listening to the soul of Mark Renton (Ewan McGregor), offering up another one of his Choose Life monologues. It’s beautifully fucking illustrated.

Sadly, T2 Trainspotting exists at a time when soundtracks aren’t exactly a thing anymore. What used to make the medium so powerful was their ability to connect listeners with artists and songs they had never heard before. Yet in the age of Spotify, YouTube, and Apple Music, all anyone has to do is cross reference the tracklists of IMDb with whatever search bar they’re subscribed to, and if we’re being really cynical, they don’t even need a subscription. Ironically, that makes this soundtrack even more spiritually aligned with the film, as much like the skagboys, it, too, is staring at obsolescence.

The whole thing exists as an act of memorial.