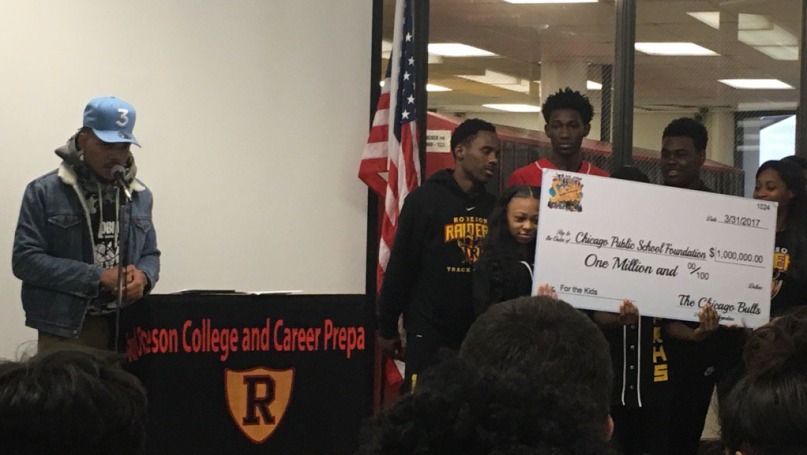 Recently, Donald Trump’s administration proposed a federal budget that, among many other terrible things, would defund the National Endowment for the Arts (NEA). Now, real-life Chicago superhero Chance the Rapper is taking matters into his own hands by launching the New Chance Arts and Literacy Fund to benefit arts education in Chicago Public Schools.

Chance made the announcement during a press conference held at Paul Robeson High School in Englewood on Friday afternoon. “As an artist and an after school teacher, I know the arts are essential,” Chance said. “To ensure that more students have more access, I am excited to announce the creation of the New Chance Arts and Literacy Fund. The fund will bring arts program and materials to schools that have experienced a decrease in five-year graduation rates, experienced budget cuts and lack of text books, and are without music or arts programs.” The fund will begin investing dollars and material resources into CPS beginning this fall for the 2017-2018 school year.

The Chance Arts and Literacy Fund is the rapper’s second major charitable initiative benefiting CPS. Last month, he personally donated $1,000,000 to underfunded Chicago schools. At today’s press conference, Chance announced that the Chicago Bulls have matched his donation. What’s more, several of his celebrity friends, including Justin Bieber’s manager, Scooter Braun, and Hannibal Buress, have donated to the cause, bringing the total amount raised to $2.2 million to date.

If that weren’t enough, for every $100,000 raised for CPS, Chance’s non-profit Social Works will donate $10,000 to a specific Chicago school. 10 schools have already received donations, and 12 more were announced today.

Fans can make their own donations via Chance’s Social Works website.