This bloody, satiric thriller is far more effective as grindhouse pulp than as social commentary 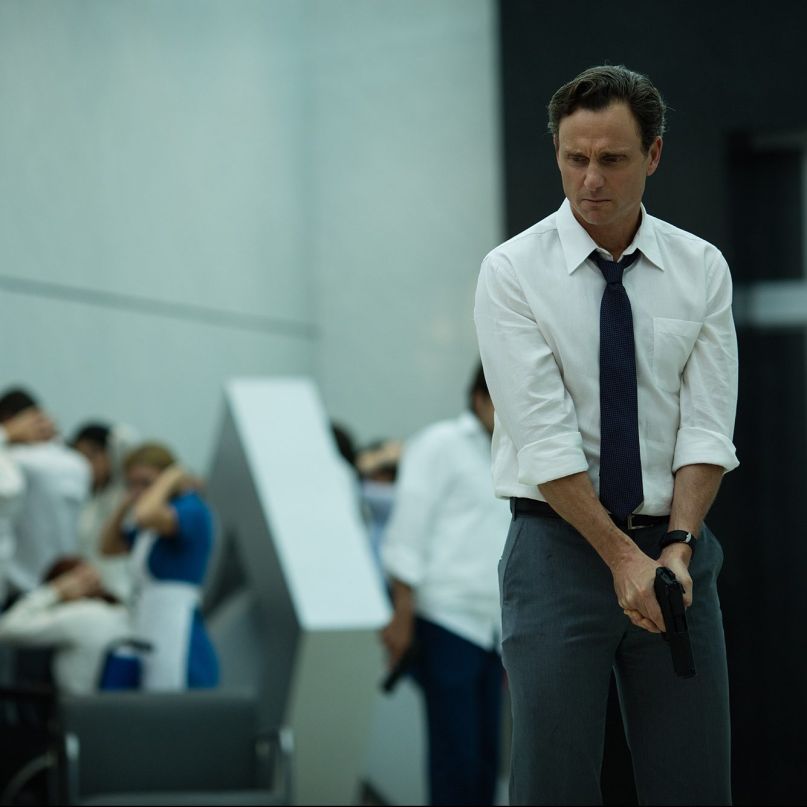 While James Gunn’s found a nice home for himself with Marvel and the irreverent space opera of Guardians of the Galaxy, he’s a horror guy at heart. He got his start with the lovingly rendered schlock of Troma, and those fingerprints are all over everything he’s done since – from his screenplay for the bloody Dawn of the Dead remake to his gross-out alien invasion flick Slither. Luckily, The Belko Experiment (written by Gunn, directed by Greg McLean, and produced by low-budget thriller titan Blumhouse) feels like a return to the blood-slicked horror comedy of his roots, even if it doesn’t completely fire on all cylinders.

Set in the isolated, antiseptic office building of a mysterious company called Belko, based out of Bogotá, Colombia, The Belko Experiment quickly sets up its simple, high-concept premise: what if a group of ordinary office workers were trapped in their building, and forced to follow the commands of a mysterious voice that won’t let them out unless they’ve murdered a certain percentage of their colleagues? With this terrible choice thrust on them, the eighty-some employees of Belko weigh their options, and factions form. Some, like laid-back everyman Mike (John Gallagher Jr.), want to maintain the moral high ground and find a way to escape, while the alpha-male managerial types (including Tony Goldwyn’s COO Barry) quickly start scheming their own way to the top of the survivor’s list. As can be expected, the more time passes, the more the social order breaks down, and soon enough the white halls of Belko become soaked with blood and littered with bodies. Think The Purge meets Office Space, with a story credit by the Stanford Prison Experiment.

Given Gunn’s Troma roots, it’s no surprise that The Belko Experiment, at its core, is an exercise in grimy, grindhouse pulp. Officemates are burned alive, crushed by elevators, and basically killed by anything you’ve seen around your office and thought, “Boy, that looks dangerous.” Heads explode like watermelons at a Gallagher show, thanks to their wranglers implanting a tracker/bomb in everyone’s skull to keep them following orders. Every crunch of bone, blood-splattered work shirt and crack of a gunshot is deeply felt. As a piece of ‘80s-throwback horror spectacle, Belko delivers the goods.

Unfortunately, what The Belko Experiment delivers in face-twisting gore and deliciously taut suspense, it lacks in insight. Gunn’s high-concept script desperately wants to sprinkle a few nuggets of social criticism in between the exploding heads and Molotov cocktails, but the script can’t find time to really delve into the office politics it thinks it’s sending up. Sure, we get the broad strokes (Ever wanted to kill your annoying coworker? Boy, management sucks, right?!), but it’s nothing particularly eye-opening. The thinly drawn characters don’t help: while Gallagher Jr.’s Mike is the ostensible protagonist, the film juggles around a couple dozen other named characters, leaving us little room to get to know them or find a reason to care. For instance, John C. McGinley’s Wendell goes from meek, middle-aged weirdo to Special Forces badass in a matter of minutes with little explanation. Other characters, like Sean Gunn’s stoner janitor or Michael Rooker’s grizzled maintenance guy, only get brief moments to shine. (One scene involving Rooker and a wrench is wonderfully stomach-churning.)

This isn’t to say that the movie’s bread-and-butter isn’t still quite the experience – as a suspense thriller, The Belko Experiment works quite well in the moment. From the time the situation is explained to the Belko employees, all the way to a disturbing scene late in the film featuring discussions of eugenics and who should live or die, McLean’s command of tone and pace is delicious. Previously-disposable characters become indispensable, and characters we spend a lot of time with are abruptly dispatched, playing with our expectations in interesting ways. It’s during this middle stretch of the movie that the concept really clicks. But after a while, like the characters, you become numb to everyone’s suffering, which neuters the suspense a bit, leading to a needlessly trite and cynical ending that cries out for an unnecessary sequel.

As a pulpy horror movie that takes an inventive concept to its furthest conclusion, The Belko Experiment shows that Gunn still has what it takes to provide some visceral thrills. It’s too bad, then, that its critiques about the cutthroat world of corporate culture don’t cut quite as deep. You’d get about the same amount of satiric value if Office Space just featured Milton bashing Gary Cole’s head in with his red Swingline stapler. If you’re just looking for a gory, gonzo Purge Lite, though, you’ll enjoy yourself.