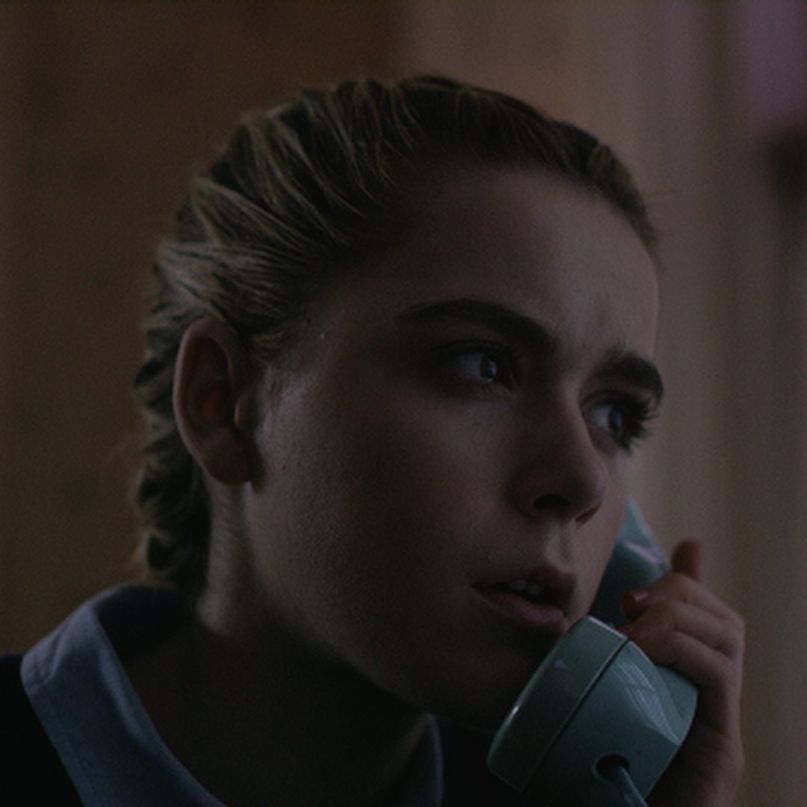 The Blackcoat’s Daughter isn’t a loud movie, but at a certain point you’re likely to realize that there hasn’t been a single moment of silence. Tense, hushed conversations abound, and under every one of them is an undulating soundtrack that alternates between harsh dissonance, ambient drones, and turbulent strings that wouldn’t sound out of place on a Godspeed You! Black Emperor album. Sometimes, buried in the midst of it all, you might hear something more human – sounds that could be distant screams of ecstasy or cries of pain. They’re audible in scenes where they would be seemingly out of place. That you question whether or not you’ve heard them speaks to this film’s biggest strength: its pervasive, unrelenting aura of unease.

Writer/director Osgood Perkins is the mind behind The Blackcoat’s Daughter, and his particular sense of stark dread isn’t unlike the debut album by his brother Elvis, who on Ash Wednesday crafted songs that crept around darkened corners and sought salvation in abstract emotions. The sons of performers Anthony Perkins and Berry Berenson, they saw one of their parents die of AIDS-related pneumonia and the other in the 9/11 attacks; they know despair. It’s no surprise that Elvis, who helped compose the film’s score, was able to so deftly capture his brother’s particular brand of darkness.

And The Blackcoat’s Daughter is most definitely dark. The film, which debuted with the title February at TIFF, opens in a dream-like state, where prep school freshman Kat (Mad Men’s Kiernan Shipka) drifts in and out of a nightmarish vision that underscores images of a black-coated figure, a giant snowbank, and a scorched car with a steadily mounting drone. The images remain abstract, but the dread it conjures never once dissipates. Not when Kat’s parents never arrive to pick her up from school, nor when her classmate Rose (Lucy Boynton) is tasked with looking after her. The snow that piles up outside is more suffocating than beautiful, especially once people start talking about devil worship and it becomes clear that nobody’s coming to get these girls.

There’s also a subplot following Joan (Emma Roberts), a mysterious runaway who’s taken in by a grieving couple (James Remar and Lauren Holly) with secrets of their own. Though treated as a mystery, the connections between Joan and the others aren’t particularly difficult to parse, and the film’s descent into madness unfolds with a certain amount of predictability, but The Blackcoat’s Daughter doesn’t rest on the strength of its narrative. Perkins is far more interested in atmosphere.

For this reason, some might describe The Blackcoat’s Daughter as a “slow burn,” but the film is never dull. Each member of the cast speaks sparsely, but with a weight and sense of purpose that reveals a sure hand both onscreen and off. The film is undoubtedly suffocating in that it contains few moments of release or levity, but by doing so it never once discounts the horror at its heart. This is the kind of film that follows you home, that makes you scared to enter a dark alley or go in the basement.

That said, it’s not free from a horror cliche or three. It also indulges in perhaps a bit too much exploitation for a movie of such elegance. The performances are stylized in ways that might be alienating, and the storytelling is deliberately abstract. But The Blackcoat’s Daughter is still the scariest movie this writer has seen to date this year, if only for the ways the score itself resonates as a black hole with secrets of its own buried inside. There, sanity itself is a fluid thing.