The Meaning of Biggie: On Life After Death

Twenty years after his death, The Notorious B.I.G. lives on in his music 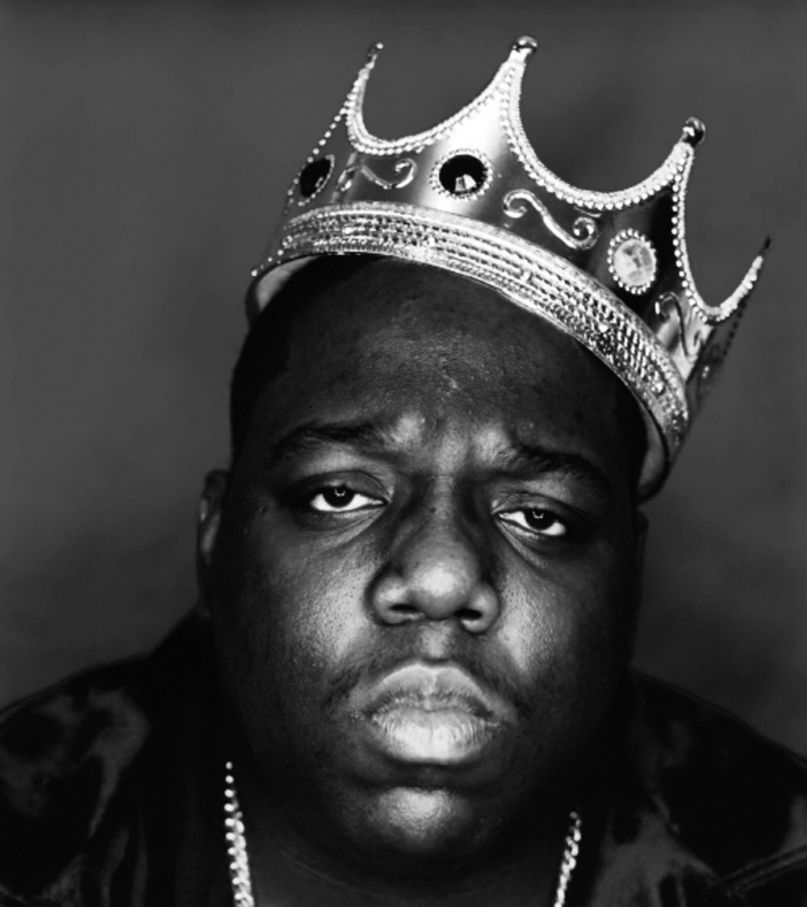 Dusting ‘Em Off is a rotating, free-form feature that revisits a classic album, film, or moment in pop-culture history.

Twenty years ago, hip-hop lost its crowned monarch. The death certificate read: Christopher G. Latore Wallace. Occupation: entertainer. Cause of death: gunshot wound to abdomen-chest. But such documents offer only the skin of a life. Underneath the stark legal papers lies a rich hip-hop Iliad. A Shakespearean tragedy straight out of Brooklyn, baby.

The Notorious B.I.G. was more mythos than man. A bulky behemoth with a voice thick enough to shake whole cities and a flow smoother than his Versace shirts. He was Streets of Rage’s Mr X — Gotham’s steel structures propped up in his ample palms, his distinctive shadow cast across the five boroughs. “King of New York” became a prized status, but no one since has filled the throne.

The legend of Big was crystallized on his double-disc sophomore opus, Life After Death, released just 16 days after his death. It’s a blockbuster rap record — all fulsome beats, commanding verses, unchecked experimentation, sharp pop instincts, and mammoth singles. Yet, flowing through its platinum outline is the dark specter of death. Had its creator lived to see its release, the album would still have been a cutting meditation on mortality, akin to Ingmar Bergman’s The Seventh Seal. The way things played out makes Life After Death a chilling work of dark prophecy.

Rarely has an artist done so much in a discography so compact. Without Life After Death, Biggie’s oeuvre would have leaned on just one album. Released in 1994, Ready to Die is a rum punch of a rap record — maybe the greatest ever made. The cinematic rise and fall of a gangster gave us the clearest iteration of the New York street hustler this side of Super Fly. The 22-year-old Bed-Stuy emcee channeled his experiences as a low-level street hood and dreams of large-scale success through vivid lyricism and superhuman rap ability. Big was rocking Kangol hats, Coogi sweaters, dark sunglasses, and a pager tucked into his baggie jeans. Life After Death gave us a dapper don who always dressed like he was ready for a funeral.

What happened in the intervening period would weigh on anybody’s soul. When five bullets ripped through Tupac Shakur’s lean muscle and bone physique on November 30, 1994, perhaps Big’s fate was sealed. Shakur survived, blamed former friend Wallace for the shooting, and set in motion a cataclysmic series of events that have been etched on parchment and filed in hip-hop folklore forever.

There was the 1995 Source Awards, “Hit ‘Em Up”, and Big’s turbulent marriage to singer Faith Evans. There was the car accident that shattered his left leg and temporarily confined him to a wheelchair. And there was Tupac’s bloody demise on the Las Vegas strip some six months before Life After Death’s release. The burden of it all can be felt pressing down on the album. Biggie often sounds fenced in by the distress.

Biggie and Tupac will never be untangled. Their legacies intertwine too often. The tragedies of their deaths are too closely linked. Hip-hop’s most famous beef seemed to align perfectly: East Coast and West Coast, the chrome sheen of Sean “Puffy” Combs’ Bad Boy Records versus the gruff gangsterism of Marion “Suge” Knight’s Death Row. In another oddly neat reflector, both Pac and Biggie completed double-disc opuses shortly before their deaths. Cut immediately after his release from jail, Pac’s All Eyez on Me was a fireball of raw emotion. Said to have been recorded over just two weeks, the record was the bursting of his creative dam.

Life After Death feels more deliberate, more methodical. This wasn’t Big hitting the studio for a long weekend with a bag of weed, bottle of hard liquor, and a beat tape. Recorded over 18 months in New York, Los Angeles, and Trinidad, the album’s production was as large-scale as the final product. The result is a thousand different ideas crammed onto two compact discs.

The album opens with a death. That is, it picks up where Ready to Die’s final track, “Suicidal Thoughts”, left off: Big turning his pistol on himself while a desperate Combs helplessly listens from the other end of a phone line. Sirens wail and a mournful piano rings out over the New York night sky. A sorrowful Puffy sits next to his friend’s hospital band. The sound of a flat-lining heart monitor melds into first song proper, “Somebody Gotta Die”.

The album’s narrative hinges on how you read this mystery. Has Biggie died and crossed over to another dimension? Did the rapper miraculously recover and we’ve moved forward in the tale? Has he folded the timeline back onto itself, undoing Ready to Die’s grisly climax? Perhaps he’s dreaming. You never remember how a dream starts, and “Somebody Gotta Die” begins eerily, as Big quietly sits “dreamin’ about Learjets and coupes.” He sounds like Guy Pearce’s Leonard in Memento, snapping into consciousness before his doorbell pulls him into the stormy night to exact revenge on the man who murdered his friend.

The song is a masterpiece in story line-driven writing, half Luc Besson, half Edgar Allen Poe. Sneakers stained with blood, silencers on the uzis, “Hecklers, Kochs, and Calicos” — Biggie’s slow flow crams enough minutiae to flood the largest cinema screen. Yet, the track retains that blurry, dream-like quality. An alternate reality to Ready to Die’s blood-in-your-mouth chronicles.

Puffy wasn’t a beatmaker in the traditional sense, but like a movie director, he orchestrated much of the music coming out of his Bad Boy stable from behind the boards. By 1997, the label’s rap record formula had been nailed down. Brass-knuckle hip-hop was mixed with more radio friendly jams. It was hardly a revolutionary ideology, but Bad Boy’s sample-heavy singles were soulful, thumping cuts. Still, Puff had to take his artists by his hand. Craig Mack didn’t want to rap over the offbeat horn stabs and crashing drums of his Molotov cocktail classic “Flava in Ya Ear”. Nor was Biggie initially sweet when his first major single “Juicy” was put in front of him.

When Big heard the outline of “Hypnotize”, though, according to producer Deric “D-Dot” Angelettie, he “flipped out.” It’s a skyscraper-shaker of a rap single. Only a handful of songs can match the party power of that intro — the mountainous bass line and galactic synth stab mined from Herb Alpert’s 1979 hit “Rise.” Plus, Big’s jump around chants of “uh!…uh!” The beat was as large as the rapper himself — as funky as the uptown cool Blaxploitation hits that formed part of his persona.

The album’s other smash was “Mo’ Money Mo’ Problems”, a cruise back in time to the Saturday night fever of New York’s scuzzy ‘70s disco scene. Producer Stevie J, another beatmaker in the Bad Boy stable, rides Diana Ross’ “I’m Coming Out” until the wheels almost come off. It’s a fluorescent glamourama, but it doesn’t really feel like a Biggie track. Puffy and his latest prodigy Mase take the reins, building a podium on which they would both spring solo careers from. The headliner, though, makes a late entrance. On “Mo’ Money Mo’ Problems”, Biggie is Orson Welles in The Third Man — screen time is limited, but he leaves the greatest impression.

Though it sometimes feels as though Puffy and Big are wrestling for control of the wheel, Combs’ pop proclivities act as a release valve to dread that creeps under the album’s floorboards. “What’s Beef?”, for example, is a sobering account of living in the pressure cooker that had so captivated hip-hop. For listeners, the East Coast-West Coast feud was a good time. For the chief players, it was real life. “Beef is when you need two Gats to go to sleep,” raps Biggie over the track’s doomed, string-driven concerto. “Beef is when your moms ain’t safe up in the streets.”

Biggie’s flow underlines his more jaded mindset. Ready to Die tracks like “Gimme the Loot” and “Machine Gun Funk” had seen him deploy his shoot-the-lights-out spit, rattling out syllables with Gatling gun-style ferocity. By Life After Death, he’d sunk into a slower, more studied rap style. His impossibly deep baritone booms throughout the track like thunder echoing over skyscrapers. On “Kick in the Doors”, DJ Premier harnesses the horror movie terror of Screaming Jay Hawkins’ “I Put a Spell on You”. Few rappers had the full-toned voice to scale those horns.

Big’s maturing vision is laid out on his drug-slinging classic “Ten Crack Commandments”. Ready to Die had been the wild genesis. Three years and 100 life lessons later, Biggie’s criminal playbook has been cast in concrete. “Ten Crack Commandments” are unbending rules. Number 5, for example: “Never sell no crack where you rest at/ I don’t care if they want a ounce, tell ‘em ‘bounce!’” It’s one thing to spit bottomless platitudes if your not shackled by any kind of outline. Big somehow raps his formal list with self-help tape clarity.

If Ready to Die was the quintessential New York rap album, then Life After Death broadened Biggie’s scope. He fused both coasts with the fat g-funk bop of “Going Back to Cali” and tackles Bone Thugs-n-Harmony’s odd melodies on “Notorious Thugs”. He occasionally pauses to enjoy life, too, drawing from his “ashy to classy” manifesto on “Sky Is the Limit”, indulging in syrupy R&B on the R Kelly-led sex jam “Fuck You Tonight” and testing his singing voice, perhaps inadvisably, on “Playa Hater”.

The epic needed an ending. After an album of investigating the dark side of conflict, Big unleashes hell on penultimate track “The Long Kiss Goodbye”. His cousin and protégé Lil Cease has said the track is about Tupac. But he’s also said it wasn’t. Puffy, too, has denied the claim. People are going to believe what they want to believe. But if it was a late-in-the-quarter shotgun blast from Biggie aimed directly at his deceased rival, a line like “Now you rest eternally, sleepy/ You burn when you creep me” is a hell of a punctuation mark.

The sad divination of Life After Death is etched into the album’s closing track: “You’re Nobody (Til Somebody Kills You)”. The song opens with Puffy reading Psalms 23:4-6, which is often recited at Christian funerals. “I don’t wanna die/ God tell me why” is whispered underneath the hook. On the album cover, Big stands next to a funeral hearse. Bad Boy later issued a statement that the record had not been altered in any way following his death.

In the earlier hours of March 9, 1997, four bullets entered his body as he sat in his SUV at a red light at the corner of Wilshire Blvd & South Fairfax, Los Angeles. He was just 24 years-old, but he’ll always be Big Poppa.

Christopher Wallace was a somebody in life, though. He was The Notorious B.I.G. Leader of New York hip-hop. Disciple of Big Daddy Kane. Brooklyn’s finest who climbed the highest peaks of rap stardom. Life After Death is as much a celebration of all that as it is a grim meditation on mortality. It’s a work that hopefully offered its burdened creator the briefest moments of catharsis before forever becoming scripture.