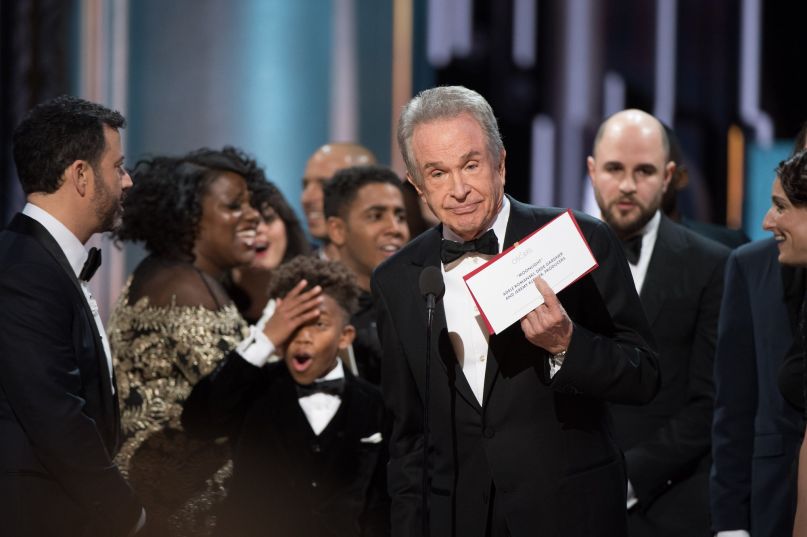 Hey, did you hear that some stuff happened at the end of the Oscars on Sunday?

Though the internet is already doing what it does and running the Best Picture error into the ground in a hailstorm of memes and ill-advised hot takes, there’s still quite a bit of fallout going on from the ceremony. Today, Variety reports that the two PricewaterhouseCoopers accountants directly responsible for the incorrect envelope being given to Warren Beatty and Faye Dunaway will no longer be involved with the ceremony, going forward. (They’ll retain their employment with the firm, as of this publication.)

It’s an inevitable and necessary step as the Oscars scramble to maintain their credibility, after Sunday’s 89th telecast ended in about as big a failure as an awards show can. (It doesn’t help that apparently one of the fired parties was caught on his phone moments before the error was made.) The report states that “[Academy president Cheryl] Boone Issacs told the AP that the Academy of Motion Picture Arts and Sciences, the full name of the group behind the Oscars, is reviewing its ties to PwC. Spokespeople for PwC and the Academy did not immediately respond to requests for comment.”

PwC issued the following statement after the ceremony, before the announcement of the two accountants’ removal: “We sincerely apologize to ‘Moonlight,’ ‘La La Land,’ Warren Beatty, Faye Dunaway, and Oscar viewers for the error that was made during the award announcement for Best Picture. The presenters had mistakenly been given the wrong category envelope and when discovered, was immediately corrected. We are currently investigating how this could have happened, and deeply regret that this occurred.

We appreciate the grace with which the nominees, the Academy, ABC, and Jimmy Kimmel handled the situation.”

The firm has been the Oscars’ official tallying service for 83 years now, and hopefully Sunday’s fiasco won’t be enough to rattle that relationship. In the meantime, we’re all eagerly looking forward to Two Envelopes, the future biopic about the failed ending to the 89th Academy Awards that’ll pop up in 5-10 years (directed by Peter Berg, probably). After all, if the Oscars love movies about the movies, imagine how much they’ll love a movie about the ceremony itself.