A different kind of giant monster movie, with a striking pair of performances at its center 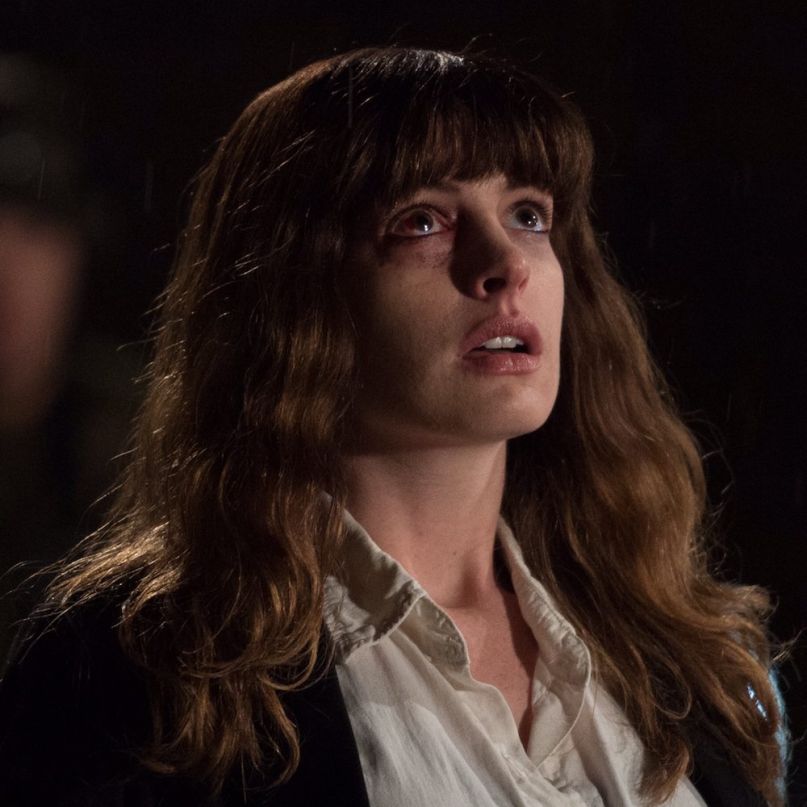 Every barely-functioning alcoholic has a moment when they can’t keep up the illusion of togetherness any longer. Maybe they cause harm to someone else, maybe they forget a crucial date too many. Maybe the little white lies just keep adding up until patience and tolerance alike are gone for good. For Gloria (Anne Hathaway), that moment arrives when her boyfriend Tim (Dan Stevens) greets her after yet another morning in which she comes home hours late, still a little drunk, with her suitcases packed for her. Tim loves her, but he’s also so sick of all her bullshit that he’d rather she just work it out on her own.

But the road to recovery is never as simple as bottoming out, and in Colossal, Nacho Vigalondo’s tragic and delirious work of magical realism, Gloria’s recovery involves an old friend, a trip back home, and a giant monster smashing through Seoul, South Korea. The monster appeared once, 25 years ago, and disappeared as quickly as it arrived. But when Gloria returns to her northern New York hometown to live in her parents’ empty, abandoned house, the monster starts to appear again with increasing frequency. And it just so happens to pop up whenever she’s been out for an evening of all-night binge drinking with her childhood neighbor Oscar (Jason Sudeikis) and his townie friends (Tim Blake Nelson and Austin Stowell).

Gloria is a classic lush: she forgets whole conversations on a regular basis, she passes out on the floor and wakes up stiff and in pain, she finds herself wandering around a playground at eight in the morning. Oscar shows up with a TV, and she has zero recollection of having agreed that he would bring her a TV. But when she discovers that the monster destroying Seoul just so happens to manifest itself whenever her boozy early-morning wanderings lead her astray, Gloria’s forced to confront her worst side, and the possibility that she’s doing far more damage than the kind she normally sets out to do to herself.

Although Colossal will likely garner a good bit of attention for the giant monster business, what Vigalondo accomplishes here is a slyer, more thoughtful kind of genre movie. (It’ll also disappoint people exclusively turning out for the former; it’s deployed more for its metaphorical value than as a way into Pacific Rim territory.) Vigalondo’s screenplay understands well that cruelty comes in a number of different forms, whether it’s the things we let slip when we’re just intoxicated enough to forget decency or the outright abuse that people inflict on one another. Yet even though Colossal gets into some bleak territory at points, particularly in its final third, it’s insightful enough to remember that drunks usually get away with their bad behavior because they’re often incredibly fun to be around until they aren’t anymore. There’s a streak of dark humor to the film that it wears well, particularly when Gloria learns that she’s not the only person in the world capable of introducing monsters to Seoul.

Colossal also has an acute eye for the fine details, from the corny half-sports, half-country Western bar in which much of its slurry debauchery takes place to the way in which Vigalondo repeatedly frames lone bottles of Pabst Blue Ribbon like they’re loaded weapons. The film’s world is a sad one, the kind that lends itself to the alcoholic’s worst nightmare: boredom. As Oscar sagely observes, “It’s hard to not get bored. There are ways, but none of them are healthy.” The go-nowhere nature of her hometown opens the door for Gloria’s worst impulses, especially once she takes a job at Oscar’s bar, and Colossal has a compelling handle on the ways in which a fun evening of drinking can quickly mutate into something more menacing. The kaiju allusions are on-the-nose, to be sure, but the film works because of its firm rooting in its underlying human drama.

Hathaway does terrific work in a role that demands an utter lack of vanity. Her performance avoids the typical trappings of “playing drunk,” instead sketching out Gloria’s endless cycle of hedonism and regret as an unavoidable flaw in her personality. She’s vulnerable and caustic and attractive and dangerous at once, and some of the film’s best moments come from Hathaway’s knack for underplaying various moments, and Vigalondo’s willingness to linger on her face and allow the actress’ expressive, sorrowful eyes to set the mood. Whenever Gloria’s fledgling career as a writer comes up, she withers as though trying to crawl into herself, her dread of compliments and the pressure that implicitly goes along with them bubbling to the surface before she forces it back down. Conveying the kind of person who can pull anyone into their orbit and repel them just as quickly is no small task, and she ably captures the physical anxiety of a woman attempting to patch her life back together even as she knows how little it’ll take to unravel whatever small progress she makes.

Colossal isn’t just Gloria’s story, though, and Sudeikis is a minor revelation in a role that sharply toys with the smarmy over-confidence of so many of his comic performances. At first Oscar is the consummate nice guy, willing to help an old friend get back on her feet, but Colossal is as insightful about the latent cruelty of the “nice guy” as any of its primary themes. There’s an understated menace to his performance that rings entirely honest as the film eases into darker territory, Oscar emerging as the kind of man who never left his childhood hometown and slowly came to resent everybody who did. It’s a smart play on Sudeikis’ star persona, and one that draws out what’s probably his best performance to date.

Though Colossal does occasionally waver, most often due to its recurring tendency to hastily discard characters before their stories feel complete, it’s also a genuinely touching film that works phenomenally well for the most part, bolstered by the lingering sense of regret that hangs over the film’s funniest and most wrenching sequences alike. Vigalondo finds as much pathos in a foot sliding over playground mulch as he does in the terror of a menaced city, and Colossal’s monster-movie conceit coalesces perfectly with its larger atmosphere of nostalgia, for childhood and dashed dreams alike. For all of the self-destruction and property destruction on hand, Vigalondo’s film manages to conclude on a note of triumph, even as it recognizes that for someone like Gloria, the trouble never really ends.