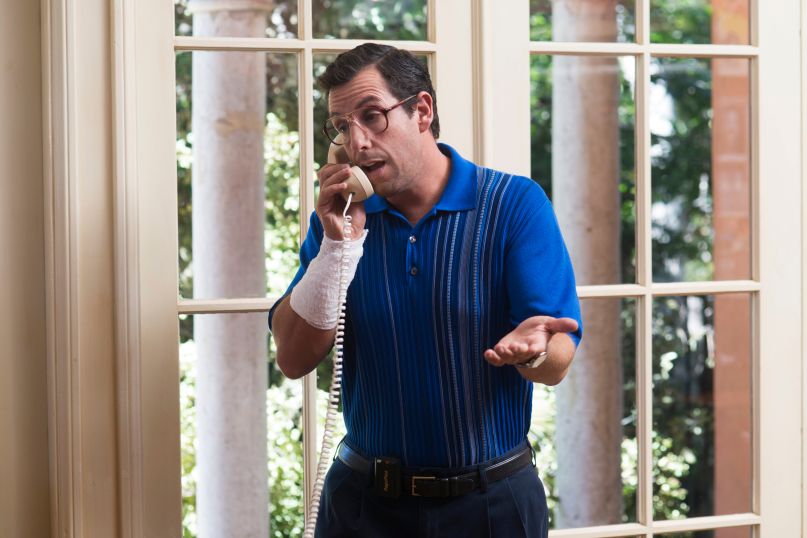 A “kind-hearted” comedy about a hapless Hollywood manager fumbling his way through a halcyon ‘90s? And Adam Sandler doesn’t really scream, or hit anyone? He’s quite bashful, for that matter? The cameos range from Conan O’Brien to Ma$e? And there’s Fruitopia as a sight gag?

Sure, what the hell. We’ve been dragging Sandler for so long. This is a modest, but welcome change of pace for the aged comic, so it comes with the tiniest sense of satisfaction to share that Sandler’s latest, Sandy Wexler? It ain’t bad. In fact, it’s a calmer, sillier, and generally less mean-spirited Sandler vehicle. Thrifty and overlong, maybe. But generously speaking, Sandy Wexler is a love letter to LA, show business, and apparently, Sandler’s own manager Sandy Wernick. If they say to write what you know, then Sandler’s managed to craft a movie about the baffling persistence of his own career, with a hint of gratitude.

Make way for Mr. Wexler. With his hair pressed against his head, plastic-rimmed aviator glasses, and patterned shirts straight outta Kohls, this guy’s a total dweeb. Oh, and he has a meat addiction that’s going to give him a heart attack, and a laugh like a mule. Loves Problem Child, too. But he’s got spunk, as they say. Wexler’s a talent scout and manager bumming around Los Angeles in 1994, looking to shop his off-brand talents.

Sandy represents folks like Ted (Kevin James), a permed ventriloquist itching to break into kids’ TV. There’s Gary Rodgers (Nick Swardson), a two-cent daredevil with a propensity for colliding with winged creatures during stunts. And Terry Crews is “Bedtime” Bobby Barnes, a pro wrestler on the verge of success with a rock-a-bye-baby gimmick. We see Sandy navi-guess deals, trying and failing to help. Sandy doesn’t have the connections, the luck, or the business acumen to get his roster above flea-mall appearances. But Sandy perseveres.

His biggest asset is Courtney Clarke (the delightfully under-appreciated Jennifer Hudson), a talented musician Sandy discovers at a theme park singing about the Ugly Duckling. Sandler, in a nasal, naïve, and utterly sincere voice, pitches her. He’ll make the hard calls, the big decisions, and stand by her. She goes for it, and the film becomes a strangely compelling odyssey and Hollywood affair between the two. And for a moment, the cynicism of commerciality fades – this is about luck and big breaks and having a helping hand in that cruel world out West. I said it was just a moment.

The script loosely glues together odd moments and encounters for Sandy, but the through-line is his love of Courtney’s talent. Goofy client, then Courtney. Mean studio rep, then Courtney. Sandler eating Boston “Chicken” as a sight gag, then Courtney. Admittedly, the repetition of plot developments grows tiresome after a point, but all the encounters and jokes mostly make it by on the strength of Sandler giving a damn and making nice.

Sandler also doesn’t draw Wexler as someone to pity. Sandy’s a goof, not to be taken seriously, but you see why his clients stick with the disheveled schmoozer. Likeability goes a long way for Sandler here. Whereas last year he spouted lifeless ad copy for a Bud Light box in The Do-Over, here he’s back in his buffoon shtick. Sandler achieves affability in two ways.

One, despite the overbearing exterior, he’s there at every odd moment for his clients. He bats off raccoons for a singer. He walks Bobby to the ring. He stands by Gary as the stuntman is lowered into ice to mend burns. You know, comical good guy stuff, with a dash of clueless moxie. Maybe this behavior is a product of Sandy not having much else going on, but at least he’s humane to the clients. And when he fails (promising a coffee commercial to a client that’s really a vaginal cleansing ad), his people come back to Sandy. “I have the original script of On Golden Pond, wanna read that out loud?” he casually asks the daughters of a client.

He’s never crass in any overt manner, and Sandler’s comic instincts, despite the physical bent, feels toned down compared to, say, the hunching and whispering of Little Nicky. Here, he’s working in the vein of a social misfit. Asking Quincy Jones (in a real cameo) for an ice cube to put in wine is a huge sin, as well as a nice laugh.

Which leads to the film’s other big attribute: the cameos. Good lord, the cameos. There’s Judd Apatow, Rob Reiner, Dana Carvey, Janeane Garofolo, Arsenio Hall, Jon Lovitz, Chris Rock, Jimmy Kimmel, and Sir Pauly Shore, among many others. They frame the film at an event for Sandy, sharing anecdotes. It’s a joke of mass quantity. The idea that so many people on the A to Z lists love this Wexler — despite his lack of skills — flies because the film has so many people willing to play along. Normally, cameo work is hack comedy. Get a name, call it a day. An oddly placed Vanilla Ice, or an overzealous Milo Ventimiglia are like that here. But O’Brien admitting Wexler’s always been a disaster with a smile on his face, or the eminent Lorne Michaels proudly introducing Sandy, is really something.

Perhaps now is a good time to have a performance evaluation of Sandler’s body of work and legacy. He is 50, after all, and this film has an air of those were the days about it. When Sandler arrived on the scene in the early ‘90s, his SNL charms were odd, yet, undeniable. Part dweeb, part frat boy, he was a brilliant jackass. Establishment critics and Boomers probably still think Billy Madison’s perverted. But he was raw, and willing to stick to his strange voice. Then came commercial success, which hurt him. He found out he didn’t have to try, and could rely on the company of writing and acting pals. Cruel and unusual comedies like Mr. Deeds made $130 million domestic. Anger Management, too. But who needs good reviews when the money’s good?

It’s become crystal clear that Sandler’s creative output in recent years has, we’ll say, waned. He’s defined himself with a propensity for broad slapstick, product placement, bro-born nostalgia, and most shadily, vacation screenplays loosely masking real vacations for the Sand Man. But here’s the rub. People, stars and audiences alike, still like the guy. He’s kept the same crew – Rock, James, Spade, etc. – for years. Billy Madison and Happy Gilmore have a lot of cachet to this day. He’s still chummy and amiable in interviews, and his ‘90s efforts have aged reasonably well.

Sandy Wexler, in its small way, shows a slightly more self-aware Sandler than we’ve seen in recent years. He seems to be saying “thanks” for sticking with him. Thanks to people like his manager Wernick, or his SNL cast mates, for putting up with him sometimes. Of course, there are still product placements, and lowbrow jokes, but there’s an empathetic streak in Sandy Wexler. And that’s something we haven’t seen from Sandler in a long time.