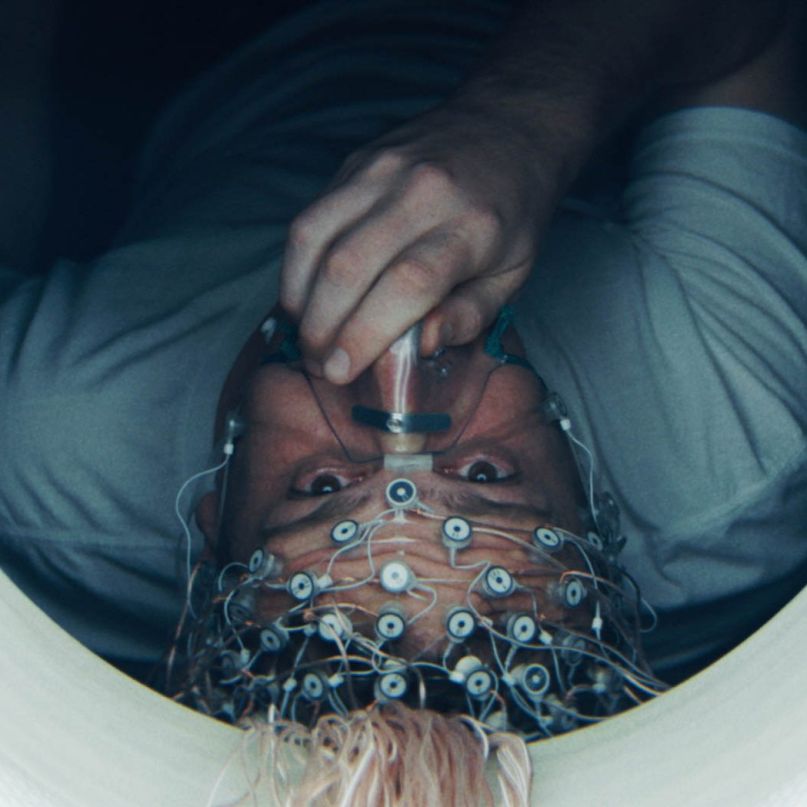 At the start of The Discovery, Thomas (Robert Redford) makes a case for the importance of divulging even the most potentially dangerous secrets to the public. To Thomas, people have a right to know when science has found explanations for the previously unexplained, and that right is unquestionable. Even in this context, in which Thomas has built a machine that definitively proves the existence of life beyond human death, he believes that people have to be shown the door, so that they can make the choice to walk through if they see fit. (“How can you keep a discovery so vital to our existence a secret?”) He makes this case during a television interview, one which ends with the cameraman committing suicide on live television, emboldened by Thomas’ discovery.

Charlie McDowell’s sci-fi drama, his second feature after the equally inquisitive The One I Love, returns to this conundrum with frequency. At what point is science obligated to protect people through ignorance, in the face of something that could irreparably reshape humanity? It’s an especially eerie question through the film’s early scenes, when Thomas’ estranged son Will (Jason Segel) wanders through an America that feels a little emptier and a lot more hopeless than it should. Picking up two years after that unsettling prologue, The Discovery imagines a world in which confirmed life after death has led to a massive, devastating spike in the global suicide rate; at various points, tickers can be seen in the background of doctor’s offices and public transportation vehicles, rattling off the ever-increasing national death rate.

To those who choose to depart, “getting there” (the film’s preferred euphemism) is simply a matter of continuing on to whatever the next adventure might be, now that it’s confirmed that there will indeed be one. To those who remain in this life, they live in a sadder world, one McDowell envisions as an endless dirge of grey skies and monochromatic aesthetics. (The film was shot near the ocean in Rhode Island, and McDowell makes a point of the desaturated aesthetics of the region early and often.) It’s a fatalistic version of the near future, a just-practical-enough world in which those who haven’t committed suicide are forced to constantly question why they haven’t. Especially when virtually every single person that Will meets on his journey has lost a few loved ones, and has to ponder the question of how much longer it’s worthwhile to continue on without them.

The Discovery is built on an ingenious premise, and if McDowell occasionally falters in how he chooses to explore its boundaries, it’s still an inquisitive piece of existential sci-fi. Similar to HBO’s post-end times series The Leftovers, The Discovery is far more interested in what such a revelation would do to people (and society, in microcosm) than the event itself. Will returns to his father’s estate after many years, since before the discovery, to attempt to dissuade his father from continuing his research while reconnecting with his thoughtful, frequently stoned brother Toby (Jesse Plemons). On the way, he meets Isla (Rooney Mara), who unbeknownst to Will is en route to her own planned end. Will eventually rescues her from the waters near his father’s compound, and they become residents, at once hoping to unearth the further secrets of human life and stop Thomas’ revelations from causing any more catastrophic social damage.

McDowell teases out the film’s semi-futuristic world in understated strokes throughout, particularly in a largely unexplained tier system within the compound, where Thomas’ work is bolstered by a sizable group of volunteers who wear color-coded jumpsuits and treat the scientist’s work like it’s gospel. these scenes, and in the glimpses of the perfectly patchwork analog setup of “the machine” itself, The Discovery offers a compelling enough vision of a plausible-enough future in which science goes just far enough to go irreparably too far. Given the film’s noticeably low budget, McDowell does great work in the realm of world building, establishing his gently dystopian future as a place where the horrors are plentiful, but disarmingly quiet. Somebody dies, and it’s a thing that happens. Lacey (Riley Keough) is publicly degraded by Thomas for endangering the secrecy of their ongoing work, and it’s treated as a natural repercussion. It’s a world of adrift souls, looking for anybody to which they can tether their faith and belief.

It’s maddening, then, when The Discovery eventually mires its compelling premise in the trappings of a staid indie drama. Segel continues his overtures into dramatic performance here, and his dour affect is less a product of the actor’s performance than McDowell and Justin Lader’s screenplay, which compels its actors to underplay nearly every moment as much as possible, in order to maintain the Black Mirror-esque future shock numbness of its premise. Similarly, Mara does capable work in what ultimately proves to be something of a weary take on the Manic Pixie trope that’s plagued the Sundance movie for years now. The actors are forced to meet the film’s purposely stiff tone throughout, and it ends up doing a disservice to some compelling work. This is especially true of Redford’s driven genius; the actor manages a fine sense of quiet menace as he pushes the research into what could be even more dangerous territory, but the film has a tendency to undercut some of his most barbed moments (particularly in the aforementioned exchange with Keough) by also painting him as a tragically misunderstood figure throughout.

The Discovery vacillates between melodrama and genuine pathos at such a frustrating clip that it’s hard to fully immerse oneself in the film’s race against discovery after a time. (In short: Thomas learns that he could potentially be able to capture what the next world looks like on tape, which would only exacerbate the global death toll.) There’s quite a bit to chew on, particularly as Will and Isla form a genuine connection amidst the chaos and the film is able to linger on what could be lost in a scenario like this, but McDowell frequently jumps from one major plot point to the next without allowing his characters to meaningfully follow. (One exchange, in which Will and Isla discuss some of their deepest regrets in a barely-lit bedroom in the dead of night, suggests a more humanistic film than this one consistently manages to be.)

After a time, The Discovery feels like it’s less about people living in a world like the one McDowell invents than the world itself. That world is so well-realized that the film is worth seeing, but it’s a mild letdown given the number of philosophical queries that it raises, only to leave ultimately unexplored. The film isn’t entirely without a sense of hope, but it’s less concerned with hope or survival than with teasing out the boundaries of its core scenario. Yet it lingers, for its problems, long after the film has concluded. In a manner befitting its protagonists’ endless searching, The Discovery is about what people will become when their bodies finally go, and what meaning lies beyond when they do.