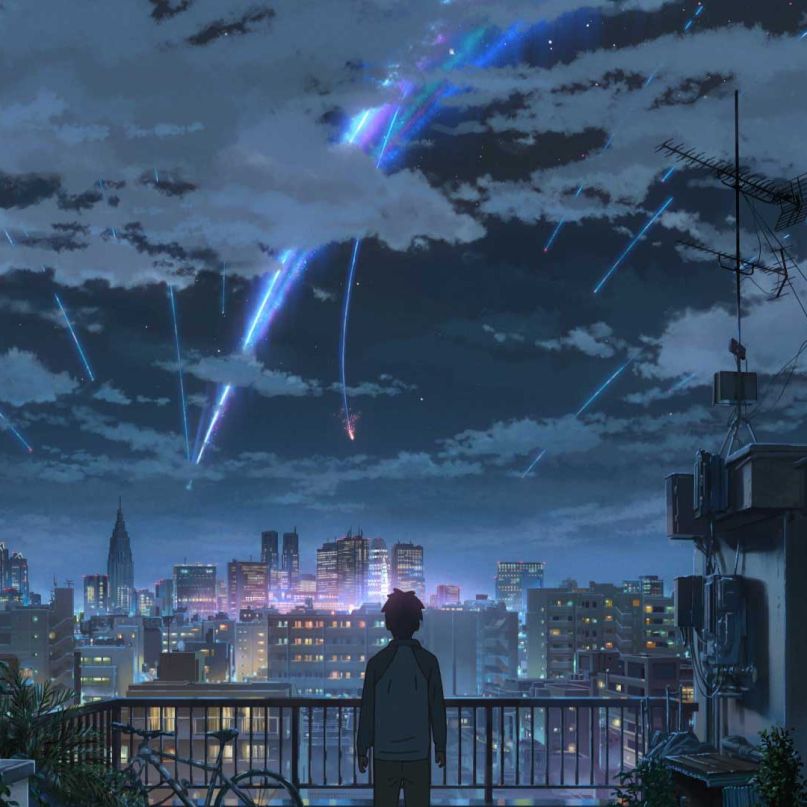 Each morning, Taki (Ryûnosuke Kamiki) wakes up feeling like something’s missing. It’s not a feeling he can articulate in any way, it’s just something he perceives. Sometimes, it comes as an echo he can’t place: “Taki! Don’t you remember me?” Sometimes it’s just the elusive feeling of loss that takes a person over from time to time. Taki goes about his day, waiting tables in a chic Tokyo restaurant, negotiating a crush on his coworker, or hanging out with his friends in cafes. But Taki always knows something is missing. If only he could work out exactly what it is.

Mitsuha (Mone Kamishiraishi) has a similar problem. A young girl of high school age living in the rural part of Japan, in the town of Itomori, Mitsuha has been experiencing some strange things. Her friends tell her that she showed up to school the previous day in a disheveled state, missing her signature hair tie. She couldn’t find her classrooms. She’s been acting out. Her sister finds her in her room some mornings, groping herself curiously. And one day, Mitsuha discovers a curious message in one of her notebooks: “Who are you?”, written in a hand that definitely isn’t her own. But Mitsuha has plenty of other normal, teenage things to worry about, from living in a town where her domineering father is the mayor, to participating in her family’s kuchikamizake ritual, where she chews rice and physically ferments it in order to leave sake at her family’s tomb. She hates doing it, finding it humiliating in front of her classmates, even if it’s a family tradition.

Taki and Mitsuha are inextricably connected, and one of Your Name’s wisest creative choices is how little time it spends dragging its heels on the revelation of how they are. That’s not to say that writer-director Makoto Shinkai’s screenplay spells out the logic of its world-bending drama; one of the film’s greatest attributes is how much it leaves to the imagination, beyond a point. But the film is forthcoming with its early revelation that Taki and Mitsuha are switching bodies, spontaneously, and always only for a single day at a time. There’s not necessarily any rhyme or reason to when or why they do, but they do, and when each goes to sleep they awaken the next morning as themselves again. It might have something to do with the coming appearance of a 1,200 year comet, but it’s hard to say.

Before long, they figure out how to help each other function: Taki teaches Mitsuha how to do his job well enough to keep it, but finds himself less enthused with Mitsuha using her time in his body to flirt with his crush and eat so much delicious Tokyo food that his savings account is drying up. Mitsuha helps Taki dress and maintain her relationships, while also helping her beloved grandmother Hitoha (Etsuko Ichihara) with the family’s traditional kumihimo, a practice of braid-threading that Shinkai uses as his illustration of the film’s ideas regarding time and fate. To Hitoha, the braids function in the same way as everything else in the world: “The threads twist, tangle, unravel, and connect again. That’s time.” This proves important before long, when a twist of fate heavily complicates the chances of Mitsuha and Taki actually coming together beyond their strange correspondence.

Taki and Mitsuha soon discover that even odder things are happening to them than all the body-swapping business, when they find themselves moved to tears for reasons they can’t fully understand, or when Taki discovers that the smartphone instructions they’ve been leaving for each other (a clever, modern way of bridging the gap) have started to disappear. After all, who are you if there’s no lingering thread connecting you to someone else? Your Name concerns itself with identity throughout, from the physical to the existential, although the idea of inverted genders is played more often for casual laughs than for any kind of social commentary. However, it’s more a story of missed connections and the immutable passage of time. (There’s a fair deal to be said, though, about Mitsuha’s desperate wish to be a young boy in Tokyo, as though such a life would be the height of personal freedom and liberation.)

Shinkai has an assured command of the film’s tone no matter which kind of story Your Name is telling at the time, which is remarkable given that it fluctuates between broad comedy, melodrama, science fiction, and disaster cinema depending on the scene. Sometimes, you get all of the above at once. While Shinkai does occasionally rely on mass bursts of coincidence to get the film where it needs to be, it’s effective in a context where coincidence and fate are such key concepts. Your Name is as much a story of the inevitable as it is a wild fantasy, and for such a wild premise, Shinkai always grounds the storytelling in the emotional resonance of two people simply trying to find better lives. In Taki, Mitsuha finds a way to shrug off her provincial life, and in Mitsuha, Taki finds himself with the opportunity to do something more, and even right a grievous wrong.

Your Name is the kind of film that’s all the more striking for how easily it could have gone awry, but Shinkai has accomplished something unique and genuinely special here. It’s heavily reliant on interpersonal melodrama, but never grows cloying. It’s built around what could be considered a narrative gimmick, particularly in its second half, but never rings insincere. It’s a film about profound cultural loss that transcends borders and domestic histories by rooting its echoes of obliteration and grief in the universally human. Instead of utilizing the imagery of destruction to wallow in even more destruction, as so many modern blockbusters have and continue to do, this is a film that fantasizes about a simpler world where life goes on after the worst. Even if the heart still calls for something it can’t fully explain after such things come to pass.

No comment on Your Name would be complete without touching on Shinkai’s other grand achievement: the film’s remarkable animation. The film stands as one of Japan’s most visually stunning works of recent vintage, a hybrid of gorgeous hand-drawn animation and smartly deployed digital augmentation creating a world that’s at once photorealistic and fantastic. Taki’s urban life is full of clean lines and uncanny skyscrapers, while Mitsuha’s town is bathed in lush greenery and wide-open, starry skies. The character designs are expressive and endearingly cartoonish, and Shinkai frequently lingers over his protagonists, just to gaze and capture their longing gazes in turn. Your Name is a genuinely astounding piece of feature-length animation as much as anything, and the way in which it uses the medium to build a world that no amount of CG-fueled live action could approximate makes this accomplishment all the more pronounced.

Your Name also manages to excel in what’s arguably one of the most difficult genres to execute with this level of success: the unrepentant melodrama. It’s one of Japan’s all-time highest grossing films (and has also been in theaters there since August 2016, still in release as of this writing), and it’s easy to see where crowds would respond with such fervor. The film offers just about everything a good film can, from anguish to swooning romance to brief reprieves of well-earned laughter. But it’s also a reminder that broad emotion, when delivered as well as Shinkai does it here, doesn’t have to be a pejorative thing. Heart doesn’t have to be mired beneath several layers of detached irony to appeal to a modern audience. Your Name is about a pair of would-be star-crossed lovers, but it earns that union and that romance in a way that few love stories even attempt to match. And like those feelings that Taki and Mitsuha can’t place but keep doggedly chasing, it’s fated to be remembered.