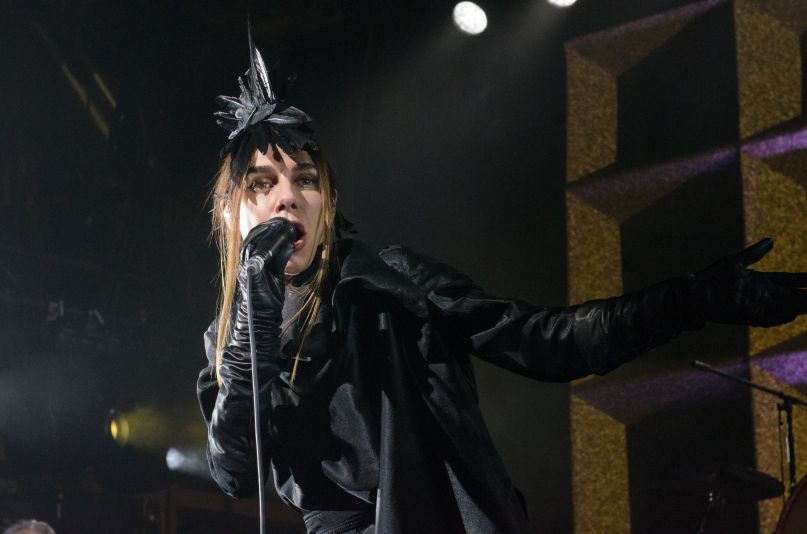 Brooklyn Steel opened only a few weeks ago, and it’s a wonderfully welcome addition to the New York venue landscape. The sound is nearly impeccable — a feat for any concert hall, let alone one this size. The space is easy, though a few more means of egress couldn’t hurt. Last night, it served PJ Harvey exceptionally, giving her breadth to put on a powerful performance. Still — and believe me, this is in no way a knock on Brooklyn Steel — a set like the band delivered last night might have been even better in a more intimate space, like a theater.

That’s because there’s something marvelously dramatic about PJ Harvey’s current show. Dressed in black, the 10-piece band came out like they were leading a funeral march. Harvey herself was practically hidden among the other members, and if not for her layered dress and feathered headpiece, you might not have even noticed her. As the lights went up on the simple backdrop of recessed squares, she walked forward and began “Chain of Keys”, each sentence punctuated with sweeping hand motions addressing the crowd.

And really that’s about all the crowd interaction she did. She thanked the audience and introduced her band members near the end, but there was literally no chatter beyond that. It gave the impression of a fourth wall, one made of glass. It wasn’t there to keep the audience separate as much as it was a frame through which they could watch a true performance. This was theater, Broadway, a presentation.

In that way, the focus was squarely on the music, especially the sound of it, and not necessarily the meaning. During moments when she wailed on the sax, Harvey would fade back to join the horn section, effortlessly melting from frontwoman into band member. When the other saxophonist took the stunning solo on “Dollar Dollar”, Harvey disappeared into the blackness of the stage. The lighting was never designed to be outwardly impressive, rather it was solely to set mood, like when it cast Harvey in silhouette as smoke rose around her during “The Devil”. Every aspect of the stage seemed fashioned to enhance the allure of the music itself like subtle choreography.

Of course, this led to some fascinating observations if you stepped back some during the The Hope Six Demolition Project parts. The setlist pulled heavily from Harvey’s most recent album, and songs like “Ministry of Social Affairs” and “Community of Hope” were absolutely splendid. However, there was an odd push-pull watching this stunning stage production as Harvey slid back in with her band and people bobbed about joyfully in the crowd while listening to a song about war in Kosovo (“The Wheel”). Still, fans for the most part seemed more thrilled to hear the section of Let England Shake tracks (“Let England Shake”,  “The Words That Maketh Murder”, and “The Glorious Land” all in a row) and songs like “50ft Queenie” or “Down by the Water” than they were concerned with the complexities of the Hope Six material. In the end, that might be the best way to enjoy the newer songs anyway: less strain over their intention and meaning, more acceptance of their beauty.

Besides, sometimes theater is best when it presents the question and not the answer. PJ Harvey’s performance should be appreciated as much for its aesthetic as anything — and again, that’s in no way a knock. You can wrestle with the music’s denotation all you want when your headphones are on; when the band’s standing in front of you, just witness the grandeur of it all.

Setlist:
Chain of Keys
Ministry of Defence
Community of Hope
Orange Monkey
Line in the Sand
Let England Shake
Words That Maketh Murder
The Glorious Land
Written on the Forehead
To Talk to You
Dollar Dollar
The Devil
The Wheel
Ministry of Social Affairs
50ft Queenie
Down by the Water
To Bring You My Love
River Anacosita
Encore:
Memorials
The River