The 12 Best Nameless Characters on The Simpsons

From Squeaky-Voiced Teen to Comic Book Guy, these beloved icons need no names 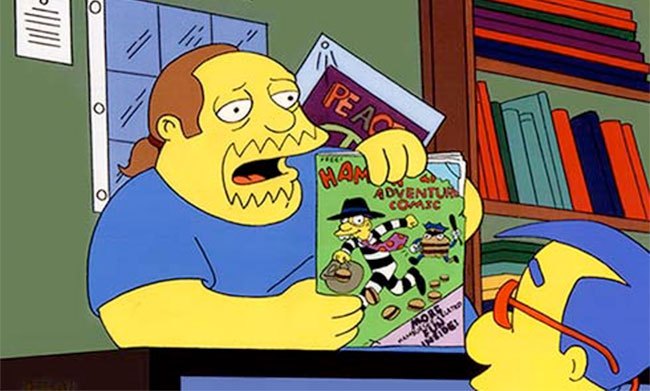 Thirty years ago this month, America’s favorite animated family made their debut as part of The Tracey Ullman Show. To celebrate, CoS will be broadcasting live from Springfield all week with a slew of Simpsons features. Today, Andrew Bloom looks back at the recurring characters who didn’t need a name to make us laugh.

Names are one of The Simpsons’ many strengths. There will never be another “Homer” this side of The Odyssey who isn’t compared to Springfield’s resident oaf. Only The Simpsons could mine the middle name of former President Richard M. Nixon and give it to poor Milhouse. And who could forget that Sideshow Bob’s real name is Robert Underdunk Terwilliger, an appellation as elaborate and ungainly as his hairstyle.

But there are many within the show’s expansive cast of characters who haven’t needed a name to make a big impact on The Simpsons’ universe. Whether it be surly comic book store proprietors, voice-cracking Krusty Burger employees, or feline-tossing loonies, Springfield is filled with plenty of people that stand out, even if we’re not sure what’s on their driver’s licenses.

Instead, these folks are referred to by whatever we know them best for: their place of employment, their most popular accessory, or just their overall demeanor. And yet, they are as vital and hilarious as any other denizens of Springfield, even as they soldier on in relative, nameless obscurity. In that spirit, here is our salute to the 12 best characters from The Simpsons who are known by a title, a pseudonym, or as Marge once put it, a vague description, rather than an actual name.