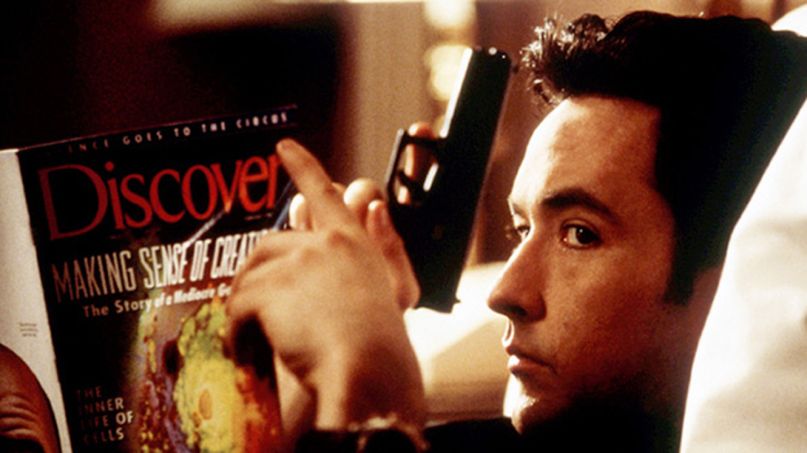 Forty years ago this month, the UK edition of The Clash’s debut album dropped like Spanish bombs on the punk rock world. To celebrate, all week long we’ll be lost in a supermarket of exclusive features that remind us why The Clash continue to rock our Casbah and remain the only band that matters. Today, Film Editor Dominick Suzanne-Mayer weighs in with another installment of our Sound to Screen series by returning to Grosse Pointe, Michigan, circa 1997, a time when John Cusack stormed the screen and Joe Strummer ruled the airwaves.

Appropriately enough for a film concerned with the ritual of the high school reunion, Grosse Pointe Blank is observing its own this week. It’s been 20 years since the release of the John Cusack vehicle about a morally conflicted hitman who returns to his Michigan hometown (Monrovia, CA, stands in for the Midwest for the majority of the film) to reconnect with his abandoned roots and with Debi (Minnie Driver), the woman he stood up for prom and left behind a decade earlier. And while the film remains a charmer, those of a certain age might recall the film’s truest highlight: the soundtrack. After all, it’s not often that a spring-release romantic comedy can boast such a quality music selection that not even two CD releases could include all the good stuff.

In keeping with the film’s rose-colored ‘80s alternative feel, from the casting of Cusack to the distinctly ‘90s fantasy of one’s childhood crush growing into a successful small-town rock radio DJ, Grosse Pointe Blank ladles on the classics. Cusack’s Martin Blank returning home is scored to Violent Femmes’ “Blister in the Sun”, which is reprised over the ending as well. Blank’s high school reunion sees ex-students jamming to Pete Townshend, Pixies, “99 Luftballoons”, and all manner of other uncommonly cool hits. (The class of ’86 would’ve likelier been enjoying some Cameo, Steve Winwood, and Peter Gabriel. Just saying.) And because this is still a movie about a hired killer, even if it’s one that starts off with a botched assassination to the tune of Johnny Nash’s “I Can See Clearly Now”, there’s some harder-hitting stuff as well: Guns N’ Roses’ cover of “Live and Let Die”, which is a bit of an anachronism given its release on Use Your Illusion 1 in 1991, as well as Faith No More’s “We Care a Lot”.

That’s to say nothing of all the featured songs that hardly made either soundtrack: “Ace of Spades”, “Walk Like an Egyptian”, and so many others. Music supervisor Kathy Nelson builds a perfectly fitting montage of sounds for the time the film seeks to honor, and it fits like a glove. Grosse Pointe Blank is a film in the business of recapturing an era more than anything; while the assassin stuff is reasonably enjoyable (and surprisingly bracing in its graphic violence), it’s the fun of seeing how one of Cusack’s iconic ‘80s protagonists might have turned out in the real world that constitutes the film’s raison d’etre. By 1997, the actor was around the middle point of his transition from an unlikely romantic hero to the prolific character actor he’s become in recent years, and Blank draws these parallels fairly often throughout.

One of the more obvious allusions is in the continued presence of The Clash in Cusack’s early oeuvre. Among the soundtrack selections are a pair of offerings from the band, as “Rudie Can’t Fail” scores Cusack and Driver’s unexpected reunion and their cover of Willi Williams’ “Armagideon Time” pops up briefly as well. The band has long been a favorite of the actor’s, and allusions have followed him over time, from Rob Gordon’s citation of “Janie Jones” as one of the great side-one track-ones in High Fidelity to The Clash shirt he wears during Say Anything. It’s fitting, given that by the time the band broke bigger with “Rock the Casbah” in 1982, “alternative” as both a nebulous genre and a social movement was having its first major moment in culture, and the punk band became part of it. And so, for an actor who made his name on endearing misfit protagonists, what better band to characterize a new, more unconventional kind of romantic hero?

Curiously, Grosse Pointe Blank also boasts something that few films can claim: a score by Clash frontman Joe Strummer. Granted, it’s not a huge component of the film; for the most part, Strummer’s work emerges during the film’s action-heavy sequences and is mainly centered around anxious synth hums and hyper-produced kettle drum sounds. Strummer was doing a fair deal of soundtrack production work during this pre-Mescaleros period, and Blank’s inclusion almost feels honorary, as much as anything. (There’s even a conspicuous Clash poster in Debi’s old high school bedroom.) Much of the film’s ska-flecked soundtrack owes one degree of debt or another to Strummer’s work, if only in terms of mainstream popularity, and it’s an appreciable way to venerate an artist who could never have been so enough before his passing five years after the film’s release.

It’s also yet another enjoyable play on what came of the people that Cusack films used to be about. Much of Blank centers on Martin’s existential struggle, as he realizes that maybe his “moral flexibilities” aren’t enough to justify the living he’s chosen to make. By the time of the film’s 1997 release, most of the ‘80s Cusack types had settled into simpler lives, a motif that pops up throughout the film’s reunion scenes. Just like any other generation, the radicals got older and had kids and started families and got jobs in real estate or, you know, murder. By ’97, even grunge (the most direct descendant of ‘80s alt-rock) was beginning to mutate into nu-metal or become its own kind of radio rock cliché. Grosse Pointe Blank is a movie about dead scenes in more than one sense, and the wistful nostalgia of its soundtrack only adds to that impression.

In its casting, tone, and soundtrack alike, Grosse Pointe Blank is a total throwback, an ode to a time when sensitive guys were all the rage (if emotionally un-interrogated in pretty much every way) and movie soundtracks were still a meaningful part of the cinematic experience to the general public. And for its hodgepodge of genres and tones, above all it hearkens back to a time when all that love required was a little bit of idealism and a bunch of kick-ass tunes, including but not limited to those recorded by The Clash. That’s a time worth missing, especially now that the Internet has ensured that it’s probably never coming back.