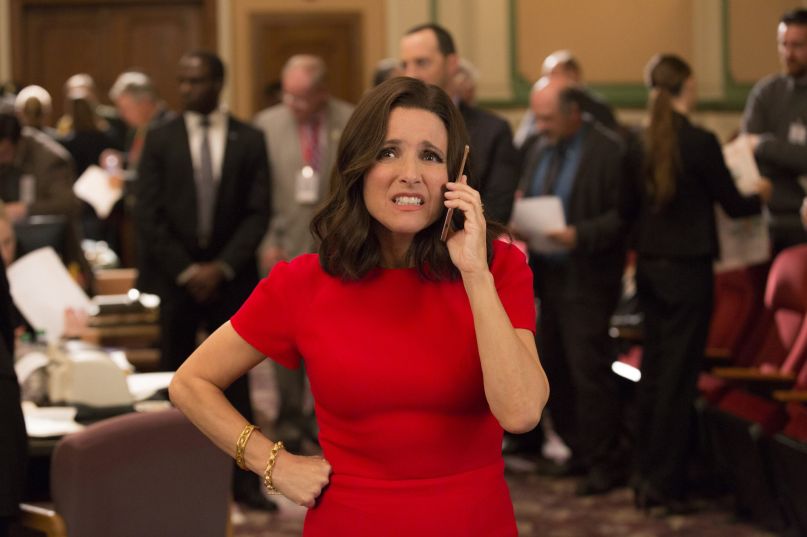 After a contentious election filled with unprecedented scandals, there was a monumental defeat for a woman on the cusp of making history. This is referring, of course, to last year’s finale of Veep’s fifth season, wherein Julia Louis-Dreyfus’ Selina Meyer lost the presidency in an 11th hour twist, leading many to wonder how she, and the show itself, would move forward.

The answer is naturally Veep’s excellent sixth season, a rebuilding year for television’s sharpest comedy. While avoiding direct commentary on the actual 2016 election, the pointed satire of DC politics and culture inside the beltway is as relevant as ever. Taking on themes like campus politics, feminism as a selling point, and American interference in foreign elections, Veep pulls no punches. Leading the charge is the show’s top-notch cast, who somehow get even funnier in year six, despite the fact that they’re never in the same room together.

Every great show needs its own “getting the band back together” moment, and Veep facilitates this by opening the season with the former Meyer brain trust scattered to the wind. Amy (Anna Chlumsky) is running her fiancé’s campaign for governor of Nevada, Dan (Reid Scott) begrudgingly co-hosts a network morning talk show, Kent (Gary Cole) and Ben (Kevin Dunn) find their way working for Congressman Jonah Ryan (the unstoppable Timothy Simons), Mike (Matt Walsh) stays at home with his adopted children and, of course, Gary (Tony Hale) is still by Selina’s side, carrying her bag. Luckily, the series finds inventive ways to bring the characters back together that never feel too forced, knowingly taking its time with arranging certain confrontations (the reunion between Selina and Jonah is well worth the wait.)

Picking up a year after the House of Representatives elected Laura Montez (Andrea Savage) to the presidency, Selina ignobly attempts her return to the national stage through a foundation that changes its mission by the episode (adult literacy, then Aids, then the advancement of global democracy) as well as her aim to cement her legacy by establishing a Presidential library. Hints of a public meltdown that would make for a great flashback episode abound, and a controversial decision in the last days of her presidency haunt Selina, but generally the show looks forward towards an uncertain future.

One aspect that Veep inherited from Curb Your Enthusiasm, besides head writer David Mandel, who took over founder Armando Ianucci’s role beginning last season, was its ingenious ability to always have its characters’ blunders come back to bite them in the ass, and season six continues that trend. The main difference is that, unlike in prior years where there was always some sort of election for the story to lead to, there isn’t a defined structure to this season’s plot, at least not initially. While the first three episodes contain follies that are sure to leave lasting unforeseen ramifications, there really is no way to guess what the driving story arc might be from episode to episode, with that uncertainty making it even more exciting.

This sense of disarray extends to the characters, who spend their time flailing about miserably in their new roles. Season six plays at times as an extended epilogue to their lives in the White House, a “where are they now” that’s prolonged into a season-length examination of disappointment and unease. “It’s just like old times, only shittier in every conceivable way imaginable,” Ben remarks by the third episode. Whether or not some sort of victory lies ahead, there are few casts where it would be more hilarious to watch them wallow in misery.

The change in dynamics leads to challenges that all the actors exceed. As Amy tries to run the campaign of a man who cares more about morals and common decency than winning, Chlumsky’s barely concealed rage is illuminating. Walsh continues to nail Mike’s oafish incompetence, this time at fatherhood, and Dunn adeptly plays Ben as an expert in a field he’s becoming considerably more out of touch with (and whose quip about millennials and Uber wins the award for best one-liner of the season so far.) What’s more, Sam Richardson and Clea Duvall both have bigger roles this year and their characters Richard and Marjorie add a number of laughs to Selina’s already-hilarious foundation.

Though, judging strictly from the first three episodes, the early MVP is Hale, whose Gary has entered into a codependency with Selina somehow more bizarre than ever before. Whether it’s a struggle on an airplane, an outburst in a car, or a particularly suspenseful moment at a dinner party, Hale steals every scene with his now-trademark pained expressions and total aptitude for physical comedy. There’s even a brief flash of him questioning his obedience to Selina’s outrageous commands that plays as the funniest scene so far.

Of course, it would be a crime to mention the brilliant work of the cast without commenting on the glue that holds everything together. With a record-breaking six Emmy wins to her name as Selina Meyer, Louis-Dreyfus proves once again why she takes home the trophy each year. Selina’s descent is shocking, and while the character has never been a paradigm of moral behavior, some of her decisions sink to truly unexpected lows. Louis-Dreyfus masterfully plays the role so that Selina’s frustrations are always simmering on the surface, even when she’s trying to be cordial every so often. It’s apparent that Selina is defeated, but it’s unclear whether the loss has led to any serious self-reflection.

Given that she’s the first female president of the United States, and considering that she was unceremoniously ousted after an abbreviated term, the series carefully plays with the gender politics that come from such a miserable situation, specifically how she continually faces the disrespect of her mostly male peers. But the series never actually defines what brand of feminist politics Selina subscribes to, as evidenced in this season’s second episode, which finds the former president making the rounds of her alma mater, an all-women’s college where she completed her undergraduate studies and whose intent on lobbying for women’s politics comes off like a total chore to Selina. It’s interesting.

While the series creators insist that nothing about this season was directly influenced by the actual election, with the exception of a “golden showers” joke having to be cut, the parallels to reality are more than apparent. Oddly enough, it’s not the victory of Trump but the defeat of Clinton that adds a bittersweet poignancy to the season’s proceedings, especially as this season’s proceedings begin to echo certain issues Clinton and her husband faced on the campaign trail. While it differs from real life in that Selina’s loss was brought on wholly by the ineptitude and callousness of her team, the sense of being so close to making history only to have it grasped away at the last minute gives the series an uncomfortable resonance.

Though, it’s probably for the best that Veep avoids parodying the current administration. Today’s tumultuous news cycle moves so fast from one asinine blunder to the next that it’s become bizarrely unrealistic to think any story from last season might actually impact and dominate this one — that’s just not how the media works right now. Even worse, Trump’s administration is fueled by unprecedented idiocy, and the majority of his staff has the characters on Veep looking more like pros than fools. White House Press Secretary Sean Spicer’s meltdown this week alone — see: “Holocaust Centers” — pushes Walsh’s traditionally incompetent Mike McClintock closer to the likes of Dee Dee Myers or Josh Earnest by comparison. Most of all, while Selina has always been selfish, vapid, and wiling to sell out her ideals for power, even she showed glimpses of having a basic understanding of politics, an understanding for the gravity of her position, and a set of ideals in the brief time she was president.

If season five was a testament to the brilliance of the cast with the seamless transition from Ianucci to Mandel, then season six is further proof that Veep shows no signs of rust. Considering the way things wrapped up last season, it was easy to feel concerned about the future after Selina’s electoral loss, but the cast and crew dazzle in their ability to wring wonders out of writing themselves into a corner. Fluid and adaptable, the show carries forward with resilience, driven by the spark of defying expectations and leaving the audience unsure as to where it’s going. Wherever that destination may be, it’s clear that the fans along for the ride are in excellent hands.