A Guide to Guardians of the Galaxy Vol. 2’s New Characters 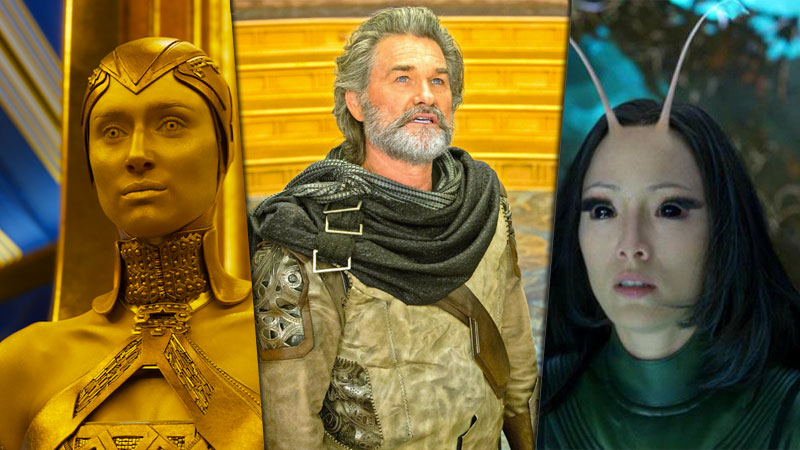 When Guardians of the Galaxy opened in August 2014, no one knew what a Gamora (Zoe Saldana) or a Rocket Raccoon (Bradley Cooper) was. Well, a couple thousand of my fellow geeks did, but the general public couldn’t tell their Star-Lord (Chris Pratt) from their Skywalker. Three years later, Groot (Vin Diesel) is a household name. Think about that — “I am Groot” is a cultural catchphrase. After three Fantastic Four movies, “My sweet Aunt Petunia” still elicits shrugs, but “I am Groot” brings smiles to devout fans and comic book neophytes alike.

Of their many successes, one of Marvel Studios’ greatest accomplishments is their proven ability to thrust relatively obscure characters into the zeitgeist with grace, glory, and glee. If you think about it, even Iron Man was considered a B-lister until Robert Downey Jr. occupied his skin. However, none of their franchises has been quite as impressive at this feat of zero-to-hero recognition as Guardians of the Galaxy.

This weekend, the Guardians will once again take to the stars in James Gunn’s highly anticipated sequel, Guardians of the Galaxy Vol. 2. All your favorites will be returning, with characters like Yondu (Michael Rooker) and Nebula (Karen Gillan) receiving expanded roles. It wouldn’t be a Marvel Cinematic Universe sequel without the introduction of at least a few newbies, though, and Vol. 2 is set to acquaint audiences with a slew of new faces. And if you thought a sentient tree was a strange creature, just wait until you meet the living planet at the center of the sequel.

There’s something to be said about going into a movie without a lick of foresight into who the fresh additions are, but having a bit of awareness about them is a nice way to impress your friends. It’s also fascinating to see how filmmakers have managed to adapt decades of comic book history into one two-hour feature, something you can’t do without knowing a thing or two before buying your ticket. So with that, we present you with an introductory breakdown of the most prominent newcomers to the Guardians of the Galaxy franchise and the MCU, where we’ll examine who the characters are in the comics and who they look to be in the movie.

A bit of a spoiler warning before we get into things: Some of the information presented in the following pages might give away more than some want to know about Vol. 2 although it’s nothing you couldn’t learn with some quick googling. That said, if you want to go into the movie without any direct expectations, we’d suggest avoiding the “In the Movie” section of each entry. But to learn something about where the new heroes and villains of Guardians of the Galaxy originated, click on.
__________________________________________________________