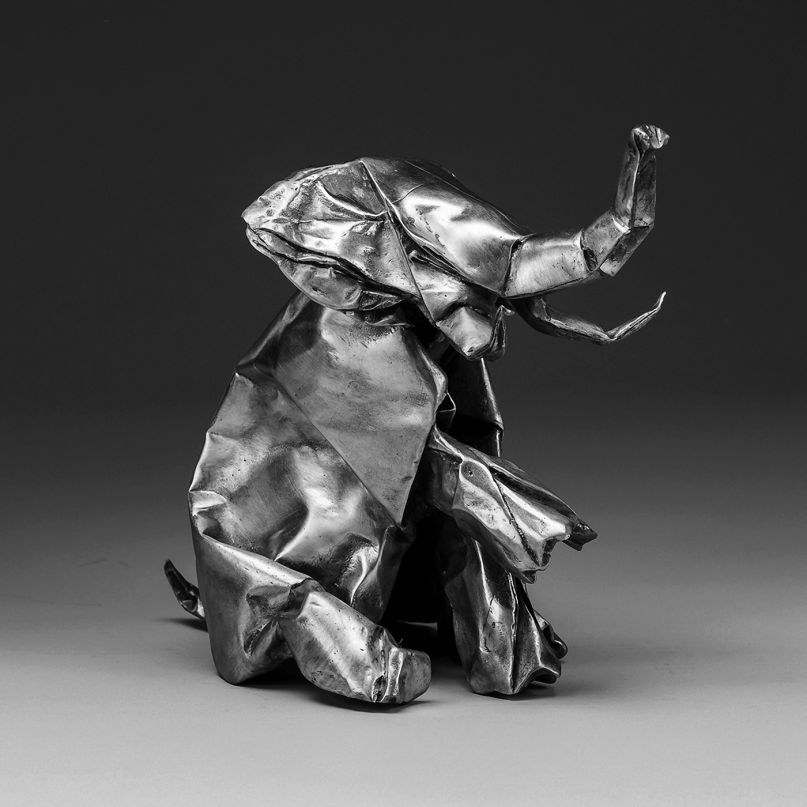 At the time of their release, Jlin’s EP Free Fall and full-length Dark Energy (both out in 2015 via UK imprint Planet Mu) were whip strikes to the temple: stinging, dizzying collections that bore undeniable weight and intensity. But the perception surrounding them might shift dramatically now that her new album, Black Origami, is here.

After spending a lot of time with the new LP, the early work seems almost naive, the product of someone still trying to find her voice amid the movie dialogue samples and tracks that felt like an attempt to keep pace with her Chicago peers. And that’s simply because Black Origami is a massive breakthrough.

The new album is, from all pre-release accounts, the byproduct of an artist finally seeing the world beyond her own backyard. With the acclaim that rained down on Energy, Jlin has been bouncing around the globe, scoring fashion shows and finding kindred spirits in dancers from India and fellow sound sculptor William Basinski. That’s what makes Origami such an astonishing move forward for this Midwest artist. She possesses a preternatural ability to absorb those experiences and influences and bring them to bear on her work with clarity and speed.

Some of these developments are easy to spot, like the drone of what sounds like a dilruba that flows and sparks through “Kyanite”, fighting for room amid chopped-up samples of Indian percussion and vocals, or how she turned the samples provided by Basinski into a hypnotic whorl of spiritual pleading on “Holy Child”.

What might only be apparent after multiple listens and some a/b testing with her early work is how much open space there is in the songs on Origami. There’s a breadth to her work that wasn’t much there before. Tracks like the rattling “Enigma” or the glittery splash of “Carbon 7” feel like they should be choreographed with fluid and balletic steps instead of the rapid movements of footwork and juke, even if the rhythms remain at the same BPM as ever. It’s about the little pauses and moments when one little detail — the roll of a drum, a shaker, the heavy roll of a bass note — is left alone in the mix.

Jlin applies these principles with the greatest authority to her old mindset on the two closing tracks: “Never Created Never Destroyed” and “Challenge To Be Continued”. They’re almost like remixes of her previous work, edited down to the bare minimum, the latter allowed a few brief swells of grandiloquence that sounds like a Drumline-style marching band hitting a climax. “Never Created”, on other hand, stays lean and bouncy with competing vocal samples popping through the mix and what might be a reggaeton horn wound down to a single parabolic squelch.

She also allows herself a little throwback joint as Origami winds down in “1”, a tune that has some loose fun with a sample of a pre-recorded message from the phone company (“‘We’re sorry but your call could not be completed…”). It feels like a minor indulgence for Jlin, which all artists should be allowed. But it also cuts too quickly to the past like an ill-placed and narratively unnecessary flashback in a film. The flow is simply too solid to get interrupted like that.

Black Origami is an album that, like its predecessors, will be savored and analyzed for the rest of the year. It’s a lock for best albums of 2017. With it, though, comes an extra frisson of pleasure, the one sparked by the realization of how far this young artist has come in such a short time span. The anticipation for where Jlin goes next and what she brings back with her to future albums and singles will go on smoldering in the background while we wait.

Essential Tracks: “Kyanite”, “Holy Child”, and “Challenge To Be Continued”