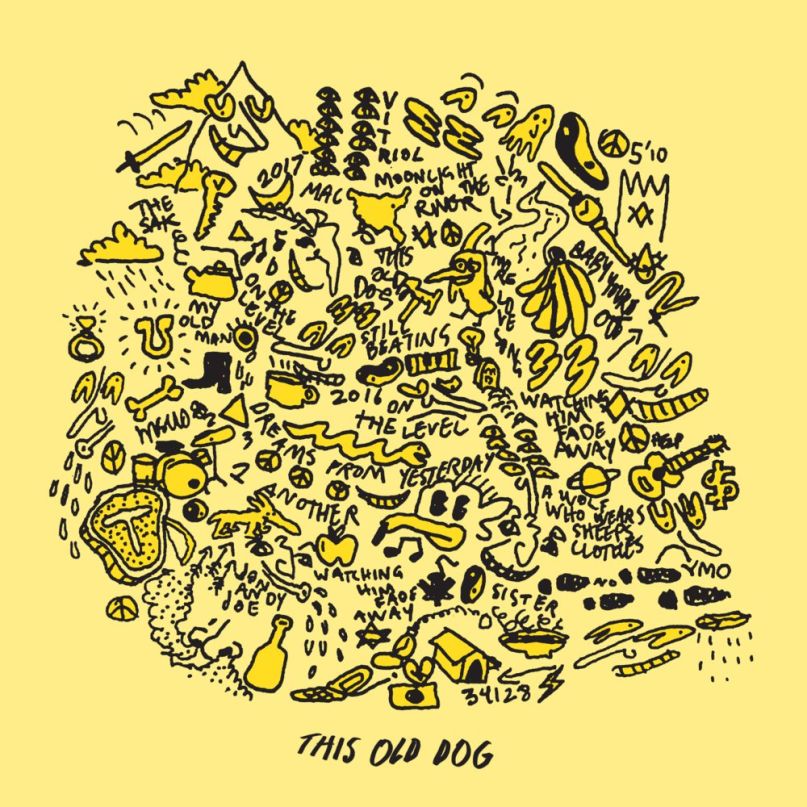 Despite his unkempt attire, love of fart jokes, and the term most often used to describe his music, Mac DeMarco is anything but a slacker. Since 2012, he has put out two critically acclaimed albums, a less-than-stellar mini-LP, appeared in the upper-middle half of every festival lineup poster, and produced a couple of sweet covers of his heroes (James Taylor and Prince). Despite this massive output, DeMarco still seems to have his credit deflected by his often ridiculous off-stage persona. Half-serious interviews and a grotesque sense of humor have caused Mac to morph into a walking meme, with critics and fans alike waiting for that ridiculous sound bite with every interview he does. When would the music become the primary narrative? On This Old Dog, DeMarco’s third proper LP, the fans finally get their answer. With more daring songwriting and cleaner studio sound, Mac DeMarco has created the most polished version of his signature sound we have heard to date.

Musically, Mac gives the listener a crash course on the genres and sounds that have influenced him across his catalog. The wonky acoustic guitar is still there, as on tracks like the somber “This Old Dog”, but there is an expansion of sound that we have not seen from DeMarco. On “A Wolf Who Wears Sheeps Clothes”, Mac does his best Jimmy Buffett impression, with harmonica and lead guitar fighting for center stage. “One More Love Song” shows his funkier side, with rolling bass and a falsetto chorus hearkening back to ’70s Philadelphia Soul. About this album’s music direction, DeMarco stated that he forgot to write it in a way that would translate well to a live set, which one can picture him saying with his typical “aww shucks” demeanor. This expansion of sound, however, only grows the mystique of DeMarco and challenges listeners to perhaps change their expectations of the Pepperoni Playboy.

Since 2, DeMarco has often used his family as a means of hashing out his own problems and insecurities. On This Old Dog, the focus turns squarely on his relationship with his father, a man who has walked in and out of his life since he was five years old. Opening track “My Old Man” lays this relationship directly on Mac’s shoulders, with our narrator looking directly at himself as a reflection of his father. “Look in the mirror, who do you see?/ Someone familiar, surely not me.” After five straight years of touring, DeMarco cannot seem to shake the fact that he has aged significantly, and the man who he’s barely known is suddenly staring back at him. It’s a haunting image for a man who prides himself on being the man-child, whose youthful exuberance has caused him to be seen as the court jester of indie rock.

This sort of vulnerability is peeled back layer by layer as the tracks snake on, until “Watching Him Fade Away” gives the final word. DeMarco’s most exposed, drab, and affecting track to date, we see the singer coming to terms with letting go of something he never quite had. DeMarco’s tender vocals cut deep over a warped organ, as he sees the image of his father slowly drifting from view. While his father has never truly been there for him in any way a father should be, he still cannot seem to speak ill of him despite the continuous desertion. It’s a heartbreaking image from a songwriter who has long tugged at the heartstrings of his listeners. This is Mac DeMarco at his most raw, his love letter to a family he never quite had. Hopefully, listeners can see past the antics and recognize what a deep place this music is coming from. And also stop using the word “chill.”

Essential Tracks: “My Old Man”, “Moonlight on the River”, and “Watching Him Fade Away”