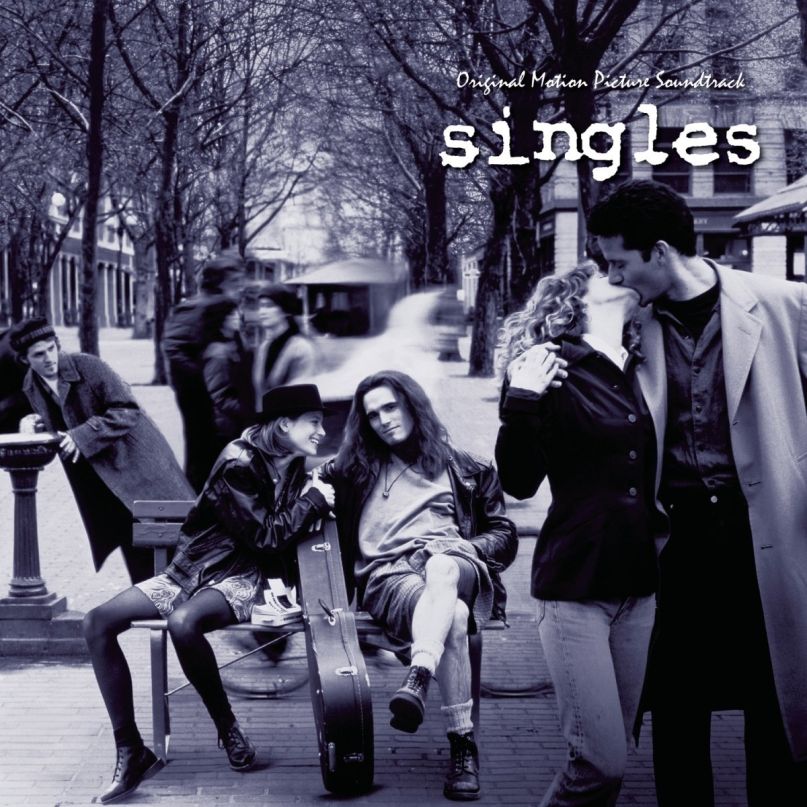 The following review originally ran on May 15th, 2017.

“I was just nowhere near your neighborhood.”

There’s a natural grace to Cameron Crowe’s Singles. All too often, the 1992 romantic comedy is cheaply sold as a nostalgic time capsule of Seattle’s alternative rock scene, but it’s not really that at all. Rather, it’s an unpretentious and innocent meditation on the chaos and creation of everyday romances, something Crowe knows how to capture with addicting precision. It’s in his blood, stemming from a lifelong obsession with Billy Wilder, a scholarly knowledge of pop music, and a keen eye for the more inherent struggles of life. He proved this back in 1981 with his excellent first novel, Fast Times at Ridgemont High, which he quickly adapted for celluloid with Amy Heckerling, and then later with 1989’s coming-of-age drama, Say Anything…, which made John Cusack the coolest person in the world and Peter Gabriel’s “In Your Eyes” the most important song to ever play on a boombox in the middle of the night outside your girlfriend’s house.

With Singles, Crowe widened his scope, working with the expansive diorama storytelling of Fast Times… and soaking it with all the heart-wrenching emotion that made Say Anything… such a formidable bruiser, and it worked. Reason being, Crowe knows how to carve out characters that feel like both your longtime next-door neighbor and your childhood teddy bear. You want to talk to them, you want to hug them, and you want to never have to say goodbye. Singles has at least four of these type of roles, namely Campbell Scott’s good-natured Steve Dunne, Kyra Sedgwick’s unlucky Linda Powell, Bridget Fonda’s marginalized Janet Livermore, and, yes, Matt Dillon’s doofus-incarnate Cliff Poncier. But that’s a total disservice to its corollary cast, from Sheila Kelley’s serial dater Debbie Hunt to Jim “Prez” True-Frost’s hapless sidekick David Bailey, who amplify the film’s chewy ruminations on love, heartbreak, and the messy stuff in between.

Of course, there’s also the soundtrack.

Twenty-five years later, it’s admittedly somewhat difficult to imagine a time when soundtracks commanded such power, but that’s exactly what happened with Singles. The film’s flannel-wearing sidepiece arrived nearly three months before the film’s release, riding on the first wave of ’90s alternative with future titans Pearl Jam, Soundgarden, and Alice in Chains. All three were a year or two removed from their proper breakthroughs, and Singles served as a handy tour guide straight out of the Seattle Sound’s proverbial gift shop, complete with liner notes on how said scene came to fruition — see: Mother Love Bone’s epic “Chloe Dancer/Crown of Thorns”, The Lovemongers’ cover of Zeppelin’s “Battle of Evermore”, and The Jimi Hendrix Experience’s “May This Be Love” — in addition to the latest jams from the local heroes — see: Mudhoney’s “Overblown” and Screaming Trees’ “Nearly Lost You” — still kicking it. Hell, even the outliers found a seat at the table: The Smashing Pumpkins’ post-Gish jam “Drown” closes things down with one of Billy Corgan’s greatest solos while Paul Westerberg tips off his post-Replacements career with two original charmers.

But Crowe doesn’t just toss any cool song into his film, and while the soundtrack became a signifier for a separate movement, it’s still wholly indebted to the film. When Linda is cruelly betrayed by complete and utter Eurotrash, Pearl Jam’s torturous “State of Love and Trust” blares in the background at the club. Later on, when Steve strolls around Seattle, destroyed, confused, and lonely, Chris Cornell keeps him company with “Seasons”, singing: “And I’m lost, behind/ The words I’ll never find/ And I’m left behind/ As seasons roll on by.” Of course, it also helps that most of the bands actually appear in the film: Eddie Vedder, Jeff Ament, and Stone Gossard play Poncier’s bee-loving bandmates in Citizen Dick; Steve lets off steam at tinnitus-inducing shows by Soundgarden and Alice in Chains; and Cornell humorously watches Poncier wreck Janet’s car when he tests out a new stereo system outside the film’s titular apartment building. To paraphrase Steve, the film and its soundtrack make a scorching-hot couple.

Until now, though, it’s only been the tip of the iceberg. As with most of Crowe’s films, there’s so much that’s left off the actual soundtrack, mostly because he stuffs his movie with so many sounds. Fortunately, Epic has padded the soundtrack’s 25th anniversary deluxe edition with all of the leftovers, especially Westerberg’s original score. In hindsight, it’s always been a little bizarre seeing the Minneapolis crooner on a soundtrack comprised of ’90s hitmakers, but the singer-songwriter makes sense for two reasons: For starters, it’s long been argued his original outfit, The Replacements, were the true progenitors of alternative rock (Nirvana before Nirvana, essentially). But more importantly, Westerberg’s acoustic flourishes are the lifeblood of the movie, soundtracking the film’s main principals, Steve and Linda, who bring some maturity to the overall narrative. Finally being able to have songs like “Lost in Emily’s Woods”, “Blue Heart”, and acoustic versions of “Dyslexic Heart” and “Waiting for Somebody” should be a relief for both die-hard fans of the Midwestern bard and the movie itself.

The rest of the additions feel like token accoutrements for rabid completists. A few Cornell compositions should ring a bell for those familiar the movie — particularly, “Score Piece #4” and obviously “Spoon Man” — while a couple of his other works for the in-movie “Poncier Tape” offer keen insight into where his head was at around the time of the film’s release (“Flutter Girl”, “Nowhere But You”, and major highlight “Ferry Boat #3”). One interesting inclusion are the two recordings from the aforementioned onscreen performances, specifically Soundgarden’s “Birth Ritual” and Alice in Chains’ “It Ain’t Like That” — the former even has some behind-the-scenes banter. Shortly after those are a few superfluous tracks from Truly (“Heart and Lungs”), Blood Circus (“Six Feet Under”), and, yes, Pearl Jam’s Mike McCready (“Singles Blues 1”). They’re all worth a listen, but that’s about it. And finally, those who didn’t pick up the very tongue-in-cheek single by Citizen Dick on Record Store Day a couple of years ago should appreciate hearing “Touch Me I’m Dick” without too much of the crunch. It’s a shame we never got to hear “Mist of Pain”.

With everything under one roof and no vacancies in sight, the 25th anniversary return to Singles is a pleasant one. It’s a humble reminder of a time when soundtracks could rule the roost and yet also serve a greater purpose. Singles did both without making any sacrifices to the film, which, soundtrack aside, also preempted the rampant coffee culture that would become omnipresent years later. (Crowe has also argued that the film influenced NBC’s Friends, and let’s just say, he’s not exactly wrong in that assessment. Fun fact: Westerberg’s best stuff appeared in both!) No, Crowe played his hand very well with this one, proving once more that he knew exactly how to tap into the culture at large and say something both affecting and prescient. Revisiting the soundtrack only cements that idea; after all, half of its artists are still playing stadiums, and its principal songwriter is oft-considered one of the most important of his generation.